Could an aquarium help us get to Mars? A team of researchers has been looking into the best sources of protein for future long-distance space missions. So far, it looks like fish and shellfish might be the answer.

Current space missions depend on stored rations or resupply missions from Earth to provide food, and supplies to crew. However, for longer-duration missions like travel to Mars, that system just won’t be feasible. As a result, NASA is now exploring how astronauts could grow and harvest their own food onboard to supplement their prepackaged rations.

Plants are easy enough to grow in space, but finding a protein source is a much larger challenge. According to Dr. Luke Roberson and Dr. Tracy Fanara, who worked on the new research with a team of multi-disciplinary scientists, the key is not only in selecting the right species, but also creating and maintaining an environment in which they can thrive.

“The first challenge is recognizing which systems can be sustainable, operate in microgravity, and provide the nutrient content that will last around a two-year mission to Mars,” explains Dr. Roberson, a Senior Principal Investigator for Flight Research at NASA. There’s also the added challenge of maintaining genetic diversity in a closed ecosystem.

This is where fish come in. Fish can be taken into space as fertilized eggs and then grown to full size on board. A 2020 study tested the impact of vibrations on European sea bass and Stone Bass eggs, mimicking the effect of a spaceflight launch. The team from the University of Montpelier and the French Research Institute for Exploitation of the Sea (Ifremer) found that the eggs were able to withstand the extreme conditions and still hatch.

Fish also adjust relatively well to altered gravity and have an easily controlled reproductive cycle. Herbivorous fish like tilapia can eat the plant scraps from hydroponic systems that aren’t suitable for humans. They’re also an efficient protein source and Roberson believes they should be considered for the Lunar Base.

“The challenge with fish is that they need a large volume of ,” warns Fanara, who is an Environmental Engineer and Research Scientist at Mote Marine Research Laboratory in Florida. They also need a good quality so additional filter feeder species would also be needed to help maintain a balanced ecosystem on board. According to Roberson, “NASA is working on plant systems that can provide plant proteins while purifying wastewater in hydroponic systems.”

The researchers have also looked into the potential for using aquatic mollusks like snails or whelks and even edible insects to help fuel astronauts on future missions. “Personally, shrimp are my favorite,” says Roberson. “However, there’s a great case for mussels and snails given the right scenario.”

“Mussels are effective filter feeders and snails are very resilient and their protein content is high,” explains Fanara. “I see diversity of species being essential for ecosystem balance.”

At the moment, NASA uses a combination of free dried or packaged meals on board the International Space Station (ISS) to help feed crew members, but for longer missions, there will be serious weight and volume restrictions. There’s also the issue of the astronauts’ well-being.

“Imagine your dinner for seven months, during the trip to Mars, starting out like your normal food choices. Then one month into your journey, the fresh food spoils and you’re left with canned, packaged, freeze-dried, or frozen food for the next six months to Mars, a couple of days on Mars, and the seven months back. That does not sound appetizing,” says Roberson, offering an understatement.

The alternative is finding a way to provide fresh food onboard. “Since 2014, NASA has been working on growing plants aboard ISS as a supplement to address this issue. Now you might be able to build in a microgreen salad production system if you take enough fertilizer with you to grow beans as a source of protein.”

However, spaceflight nutritional guidelines recommend 60 percent to two-thirds of total protein consumption comes from animals. This is why it’s essential to find a system for protein production that works.

Of course, having live organisms onboard has other benefits beyond mealtimes.

“This is where the idea of an aquarium in space becomes fun,” says Roberson. “Many homes and businesses around the country have aquariums for the sole reason of ambiance and psychological impacts.” Research shows that watching live fish for just five minutes can reduce anxiety, while increasing relaxation and improving mood.

Shrimp could also be beneficial for creating a comfortable life on the spacecraft. “They are very charismatic and would enhance the experience of the astronaut,” says Fanara, helping to give the astronauts a “sense of earth”.

“Being stuck in a spacecraft for 16-18 months, humans need interaction,” Roberson agrees. “We see this on ISS when the astronauts come to visit the plants and check on them. It provides them with a sense of home. Aquariums would have a bigger impact on the psychological balance of the human.”

The next step for the team is to design a study to see if it’s possible to create a balanced and sustainable ecosystem in the same conditions that you would expect aboard a spacecraft. “If we achieve this, the technology produced will be an incredible step for space travel, but also, groundbreaking for earth aquaponics systems as well,” says Fanara.

“For me, the most exciting part of this work is that it’s a first step to designing an aquaponics system that may be used to enhance quality as well as provide a sustainable food source,” says Fanara. “As an environmental engineer, this is a dream project to combine design with biology, hydrology, physics and chemistry to do something no one has ever done.” 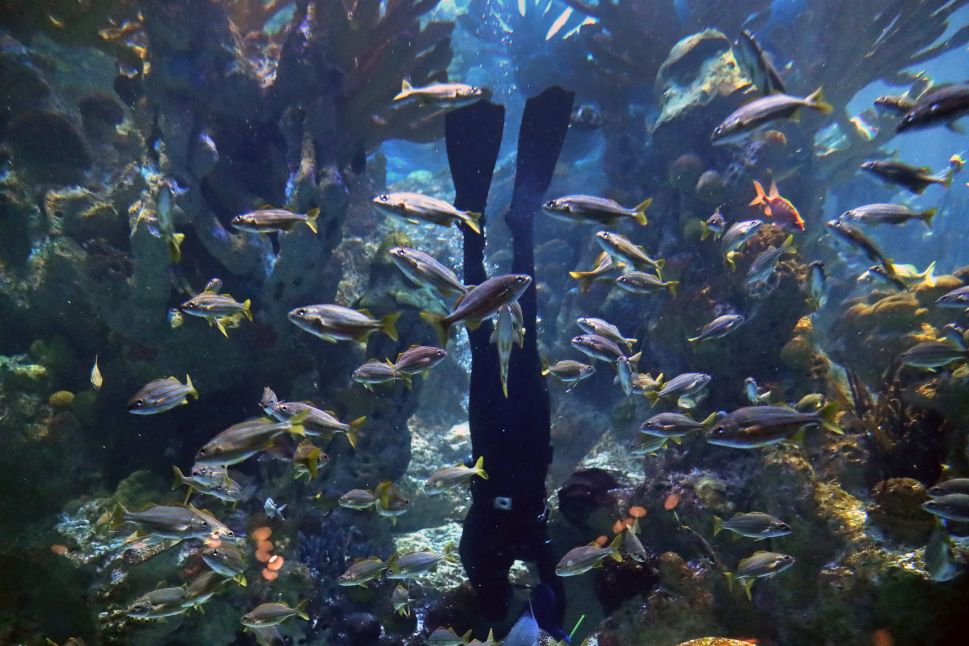