For all of Netflix’s disruptions and innovations in the television industry as the early adopter streaming service of choice, the platform has yet to conquer one central foe: analysis paralysis. It may sound like I’m throwing meaningless big brain clinical terms at you, but nearly all of us have fell victim to this phenomenon. It is the inability to make a choice when confronted with a prodigious number of options. In Netflix’s case, it results in aimless content surfing that consumes 20-plus minutes before a user gives up and throws The Office on in the background for the umpteenth time (at least before The Office fled to Peacock to start the year).

Strangely, analysis paralysis is becoming a microcosm for the rest of the streaming video on demand industry. The proliferation of platforms has presented audiences with a problem in discerning which streaming services are worth the monthly expenditure amid a crowded field of options. Netflix’s not so fatal flaw has suddenly metastasized across the SVOD ecosystem. To be better informed while debating your potential streaming commitments, let’s explore monthly cost, film and TV library, and original plus exclusive content among the big five streamers.

How much does each one cost? 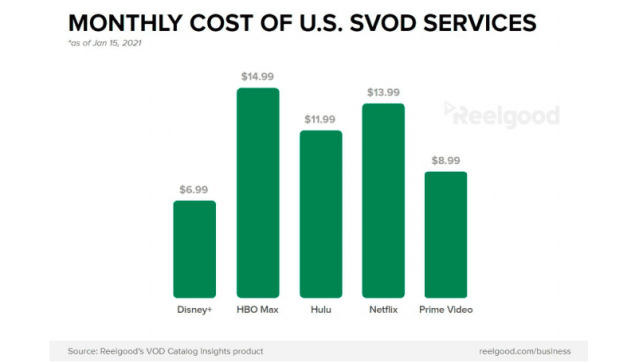 In its 2021 VOD Catalog Insights report, Reelgood—a streaming aggregator that tracks every TV show and movie available online for its 2 million U.S. users—compared the monthly standard and no-ads package prices of the five most popular streaming services. Disney+ sits on the low end at just $6.99 per month while HBO Max leads the pack in cost at $14.99 per month. Since the four other services are ads-free, Hulu’s $11.99 price point represents its non ad-supported tier. And Netflix and Amazon Prime Video are $13.99 and $8.99, respectively, per month. Countless consumer surveys indicate the average American customer is willing to subscribe to up to three SVOD services at a monthly total of $50.

It’s worth reminding consumers that Disney announced in December that it will raise its prices by $1 beginning in March. Given Disney+’s explosive, expectations-shattering growth, we can’t really blame the Mouse House for upping the cost even as we grumble about it on Twitter. All is fair in love and (streaming) war.

Bang for your buck

Like any relationship, you don’t want to commit before you know what’s out there. So let’s take a look at each service’s film and television library as well as their quality rating based on IMDb score to present a numerical breakdown of the options provided. 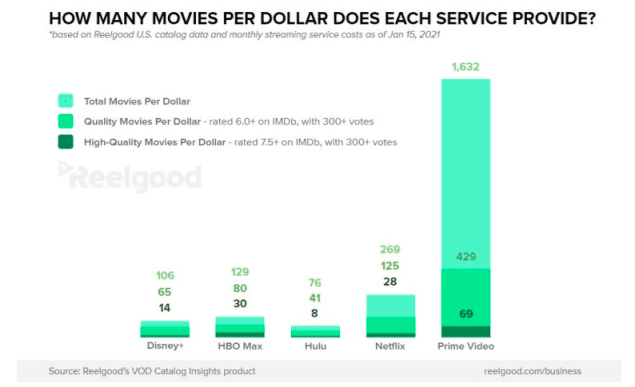 In terms of the number of movies available per dollar among the top five services, Amazon Prime Video (estimated 35 million U.S. users) takes a commanding lead in both volume and quality. While IMDb reviews are far from the definitive marker of quality, they do help to represent an aggregate opinion. Amazon holds the edge in raw numbers, but streaming is also based on specific appeal niches.

In 2019, KPMG completed a study on U.S. consumer preferences when selecting streamers that found movies were a significant area of focus, particularly for new releases and original films. In that regard, Netflix, which recently surpassed 200 million global subscribers, has accumulated the largest collection of relatively new films in its roster, with 87% of its movies released in 2010 or later. Availability of recent films is a perfectly reasonable needle mover for prospective customers.

Amazon Prime Video also holds a lead in volume of TV shows, but falls behind Netflix and Hulu in the IMDb quality metric. 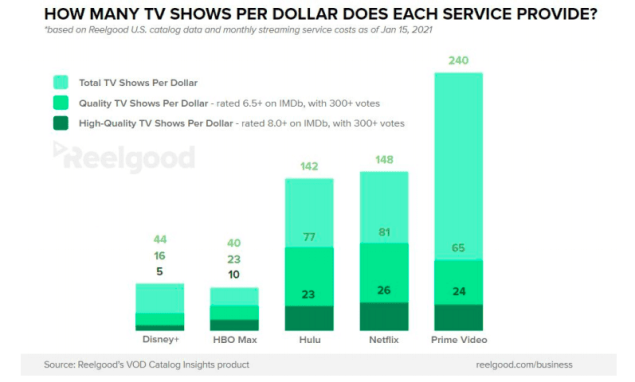 Disney+’s rampant success (more than 86 million worldwide subscribers) is made all the more impressive by the fact that it boasts a significantly smaller library as compared to the other streaming services. The same goes for HBO Max (17.6 million activations), which is growing slowly but steadily. But in 2021, Disney+ will follow WandaVision by delivering a handful of highly anticipated blockbuster series set in the Marvel Cinematic Universe while HBO Max will be propped up by Warner Bros.’ film slate.

As new streaming services seemingly pop up every month and angle to reclaim their programming from third-parties for in-house use, the major platforms have increasingly turned inward to increase the development of original TV shows at the expense of licensed content. 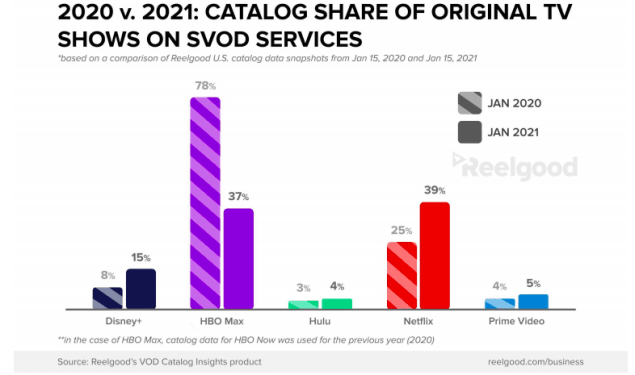 Pre-existing library content helps to avoid churn, but original content is what drives new subscription growth. Among the major streamers, Netflix and its $17 billion-plus content budget is unsurprisingly the biggest grower with original series composing 39% of its entire TV catalog. This marks a 14% increase from last year with almost 300 new original series added over the last 12 months. If original programming is the key criteria for you when deciding which streamers to subscribe to, you know where to start.

Though these metrics don’t shower a ton of love on Hulu, the streamer has done a great job of rounding out its roster of originals in recent years to compliment The Handmaid’s Tale. Hulu has proven adept at unearth touching dramedies such as Ramy, Shrill and Pen15 as well as buzzy limited series such as the Golden Globe-nominated Normal People. In completely unscientific terms, we’d classify Hulu as the Hit You In The Feels streamer.

Companies also appear to be putting forth a concentrated effort to maintain a high percentage of content that cannot be found elsewhere in the SVOD market. Exclusive programming helps to retain and acquire new users and extends to both original content creation and licensed programming. 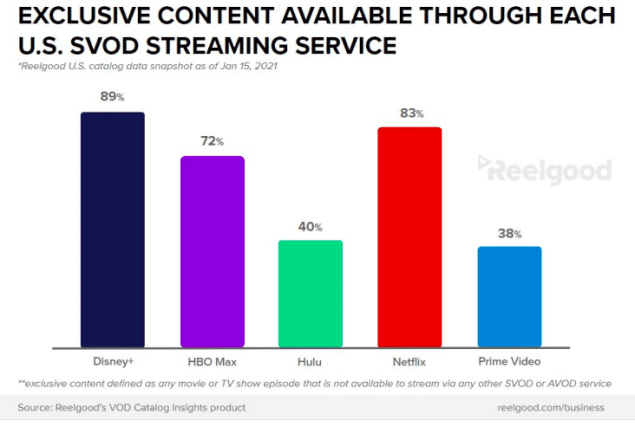 Netflix’s prominent placement is no surprise given its significant content budget and emphasis on originals. But Disney+ is revealed to make up for its small library size with the greatest percentage of exclusive content. Similarly, HBO Max may fall behind in quantity, but it makes up for it with exclusivity. And, for our money, HBO Max has the highest quality overall film library of the five main streamers while Disney+ is powered by its unrivaled high-profile franchise brands.

Choose your fighter! We’re not here to tell you what to do, but whatever streaming service or combination of candidates you ultimately shell out for will probably depend on how attractive their legacy library, exclusive offerings or price points look to you. Right now, based on the above, we’d recommend going with Netflix, HBO Max and Disney+. That trio combines excellent exclusive content, buzzy originals, and the best film library in the game for our money thanks to HBO Max. But ultimately, our only hope is to provide some background information and context so that you can make a fully formed decision.

Movie Math is an armchair analysis of Hollywood’s strategies for new releases, the streaming wars and pathways to profit. 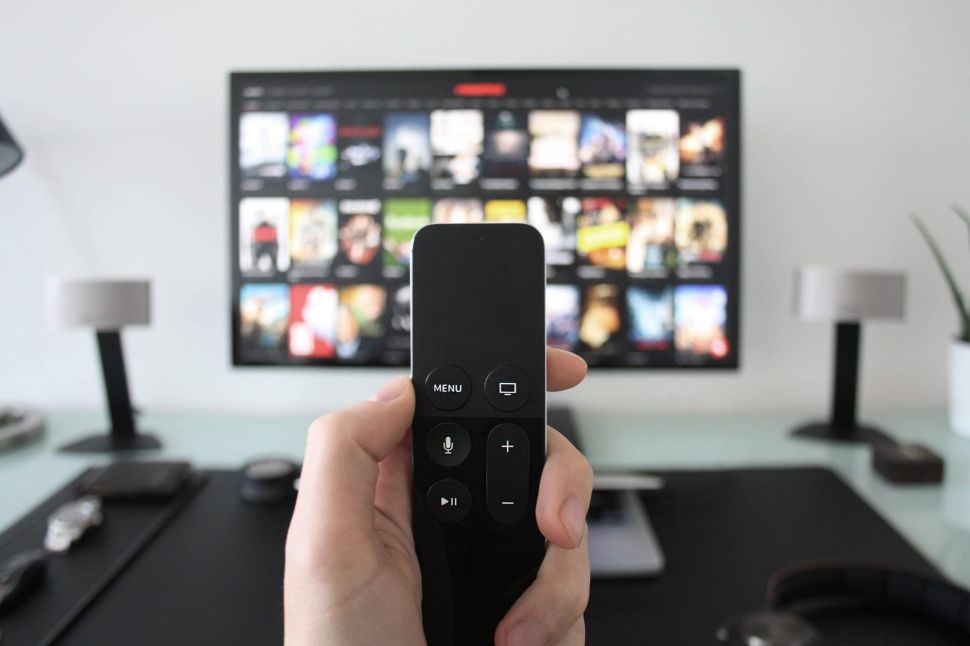