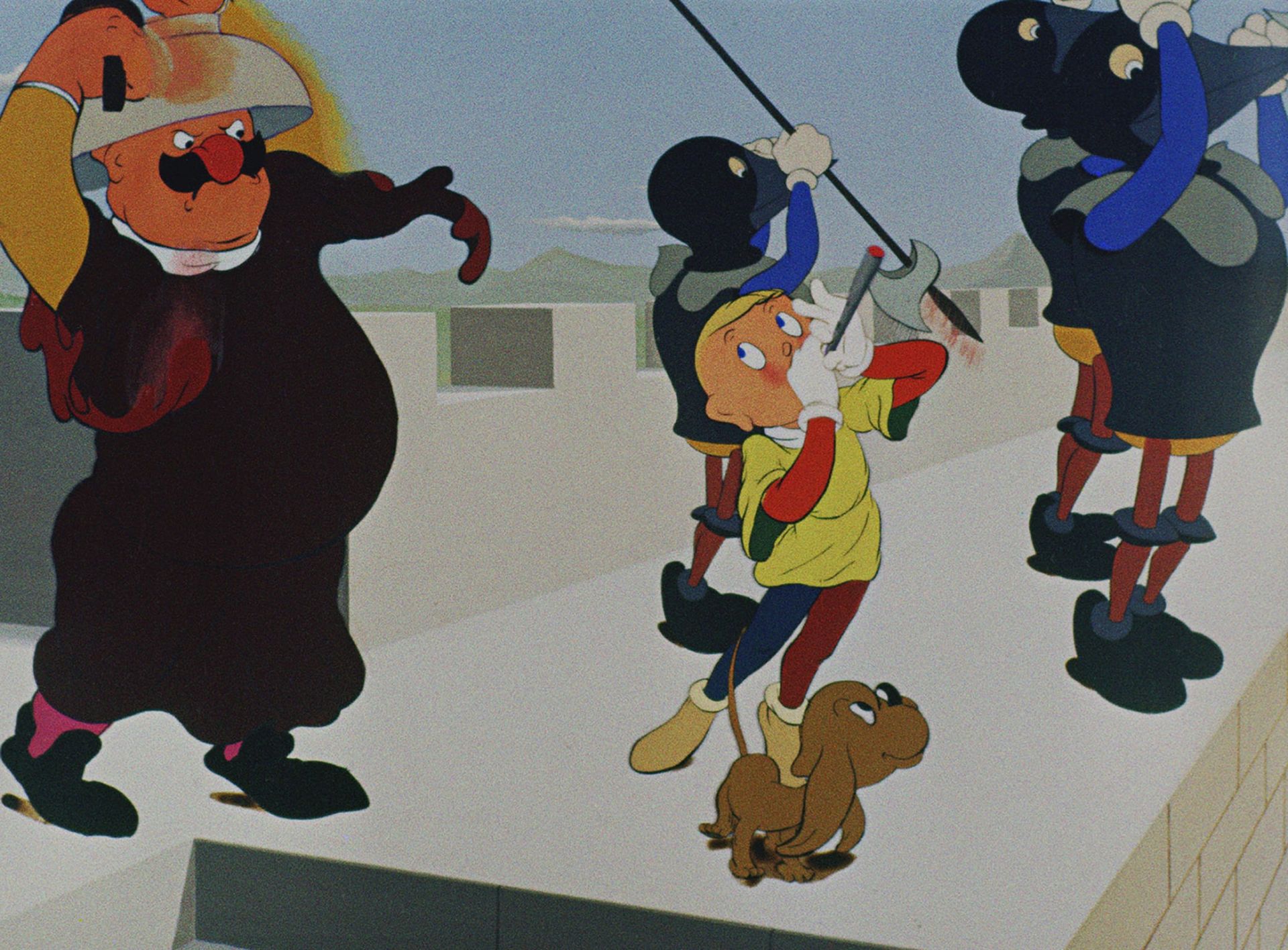 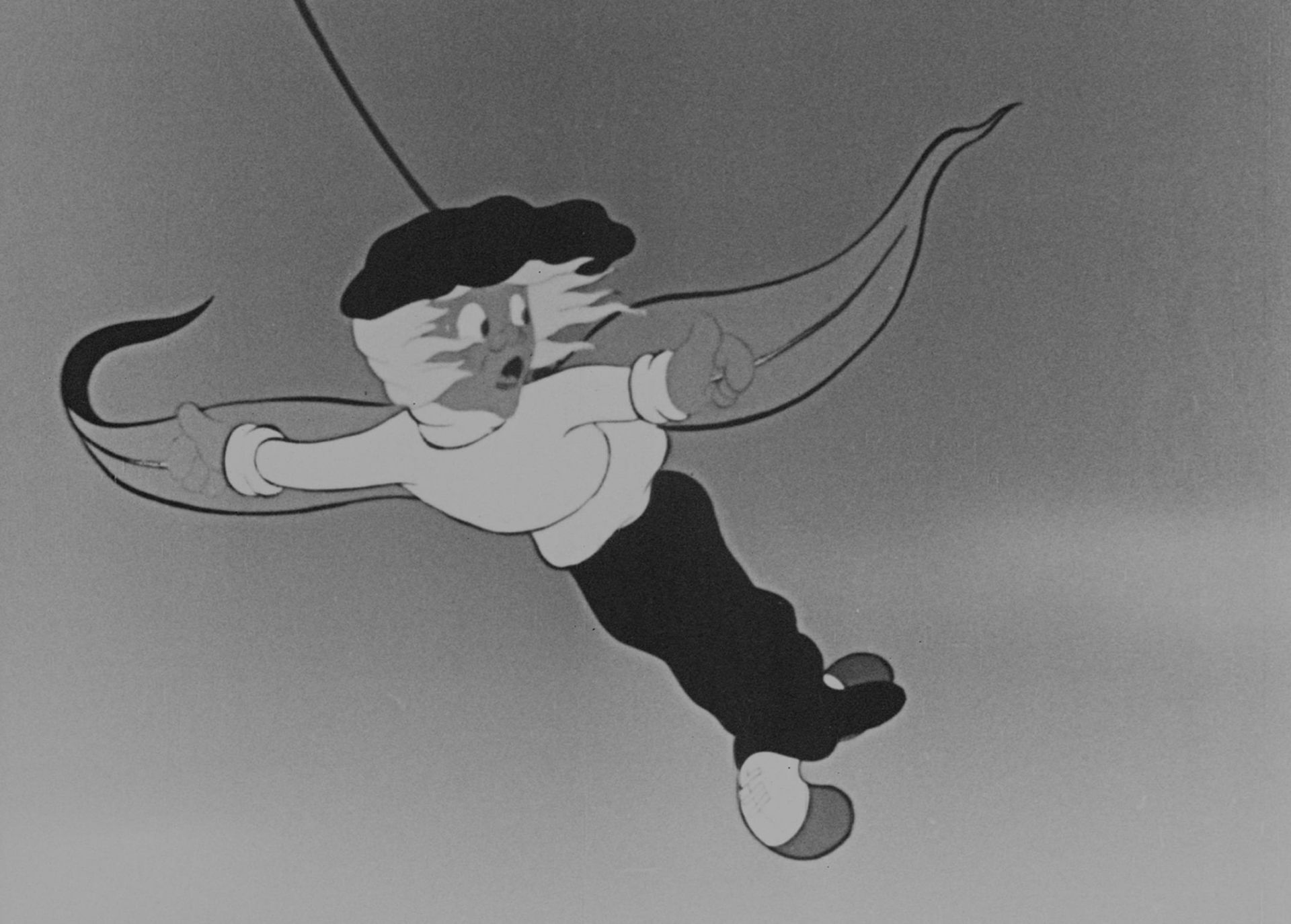 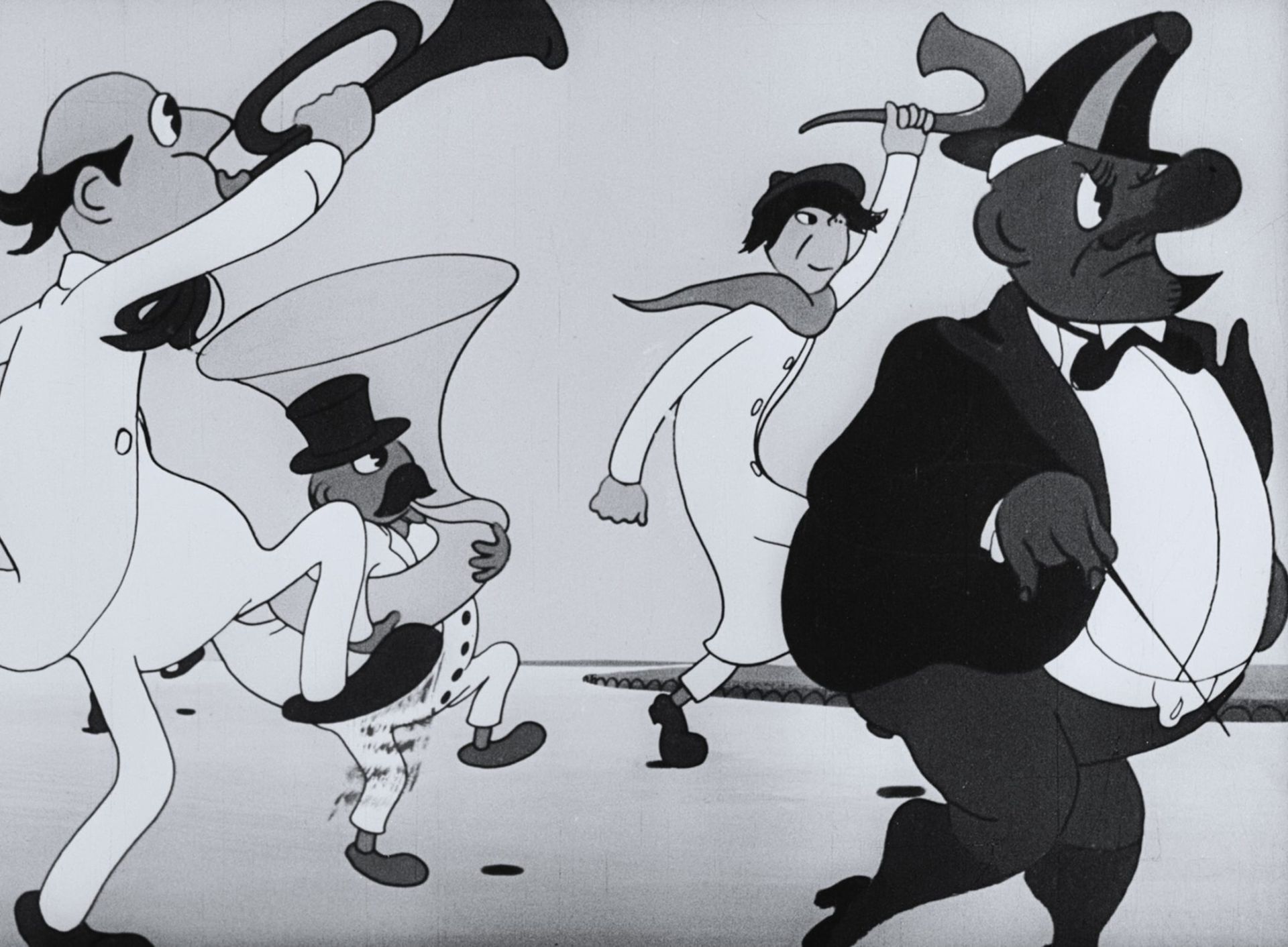 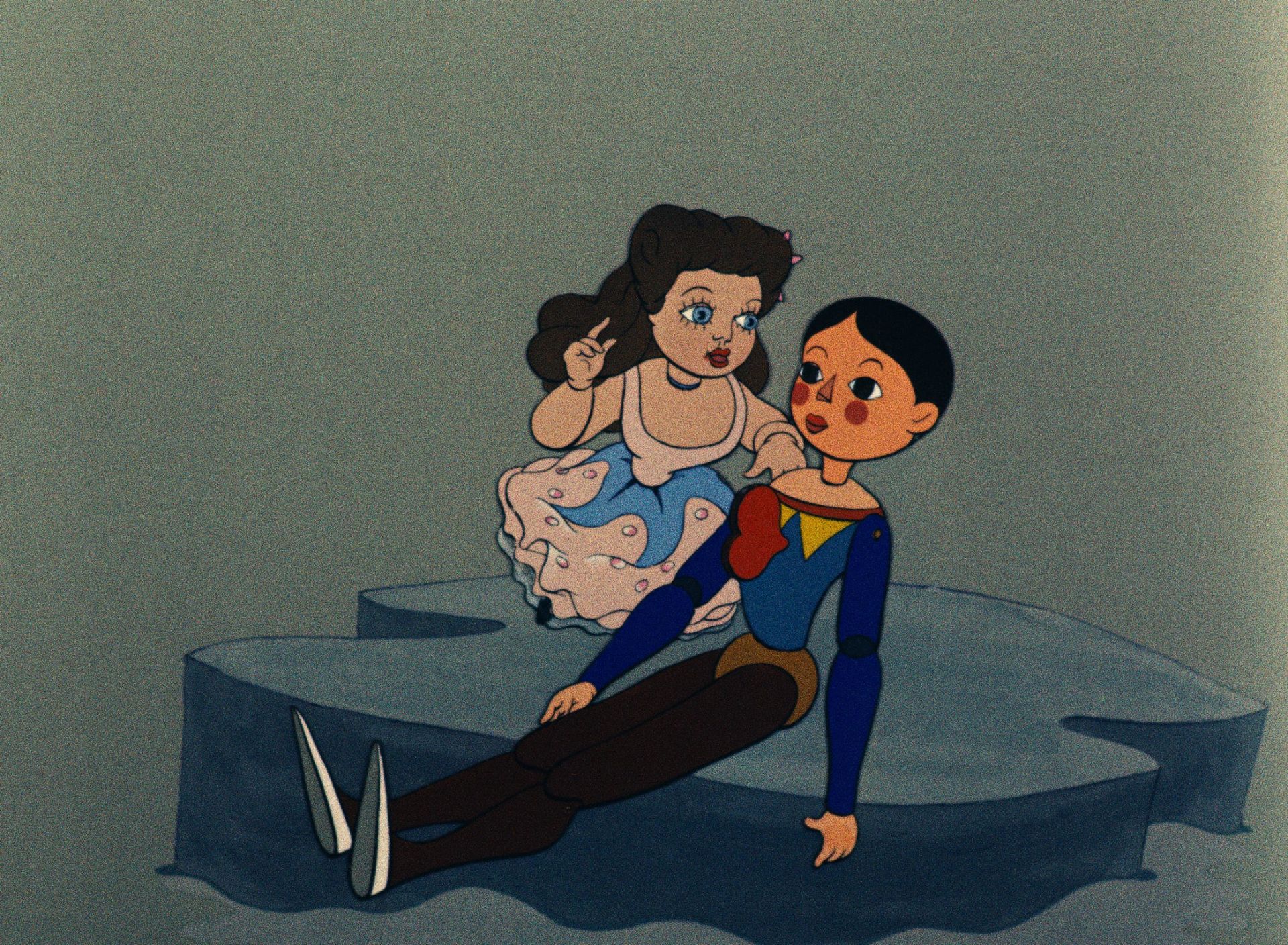 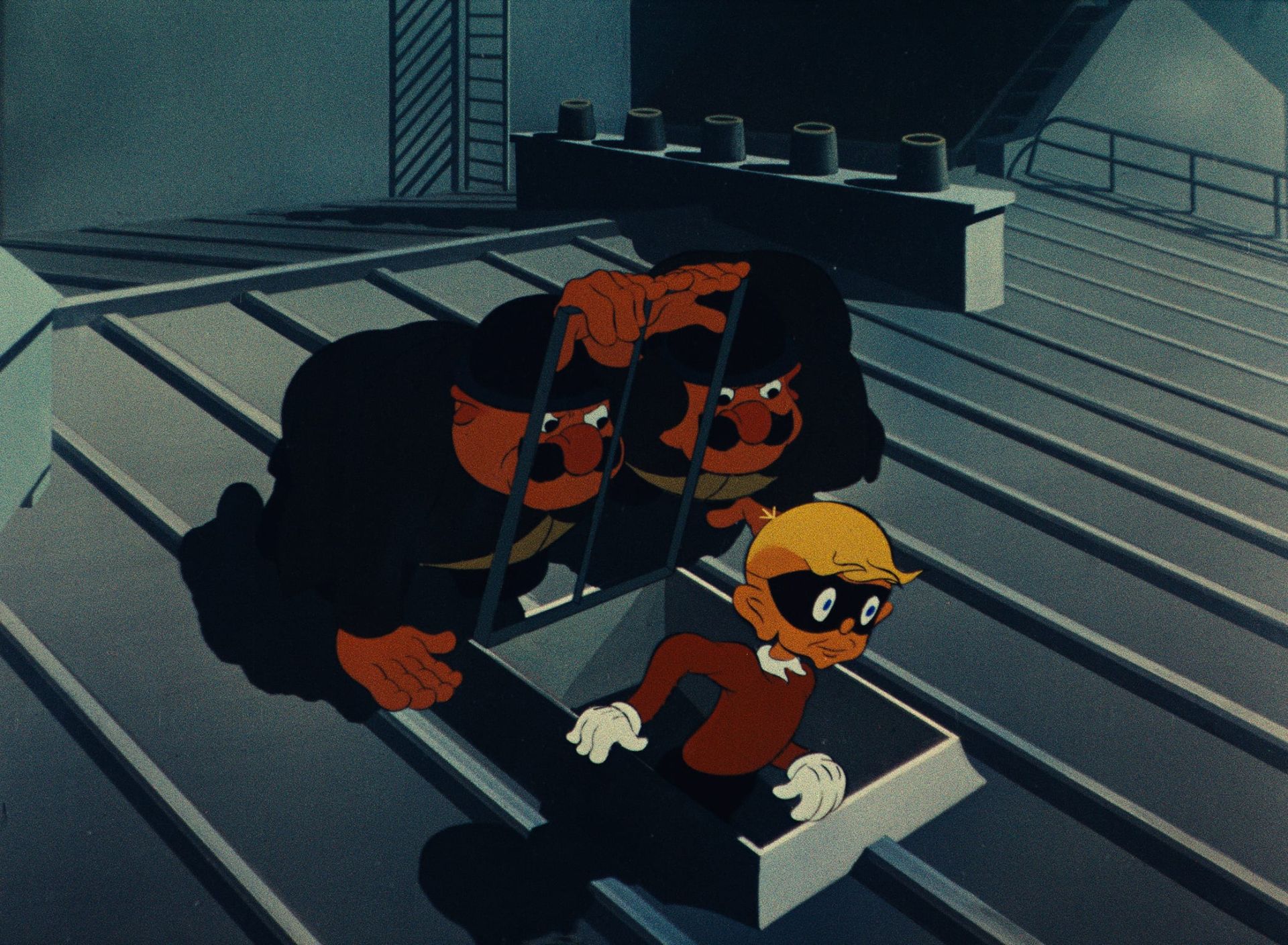 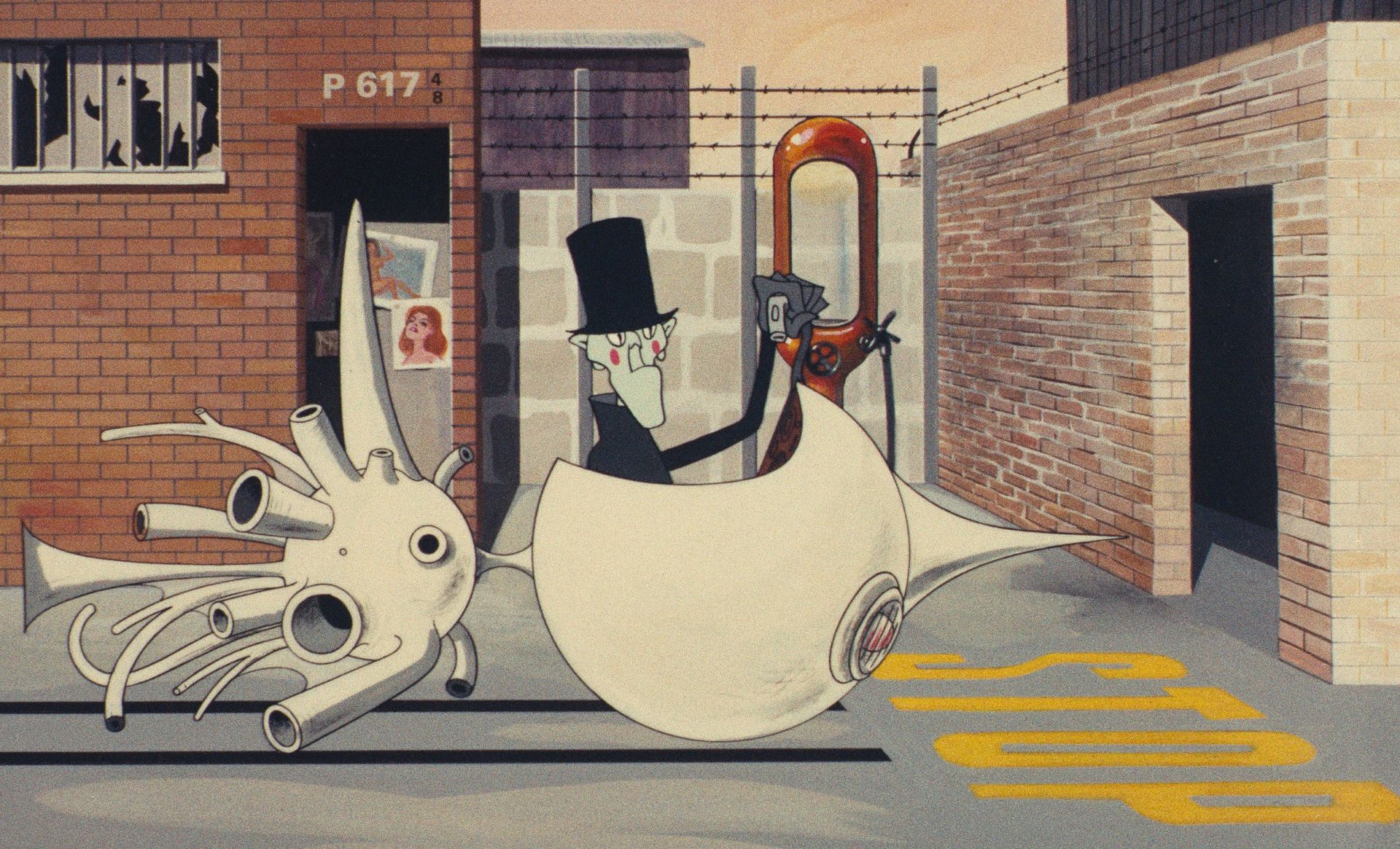 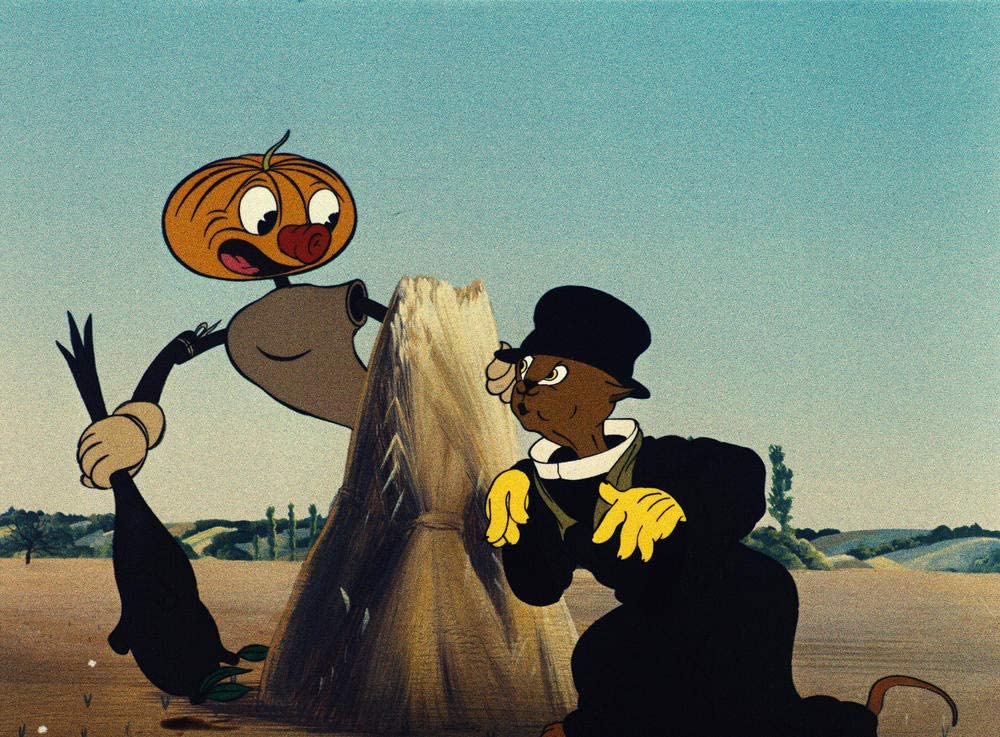 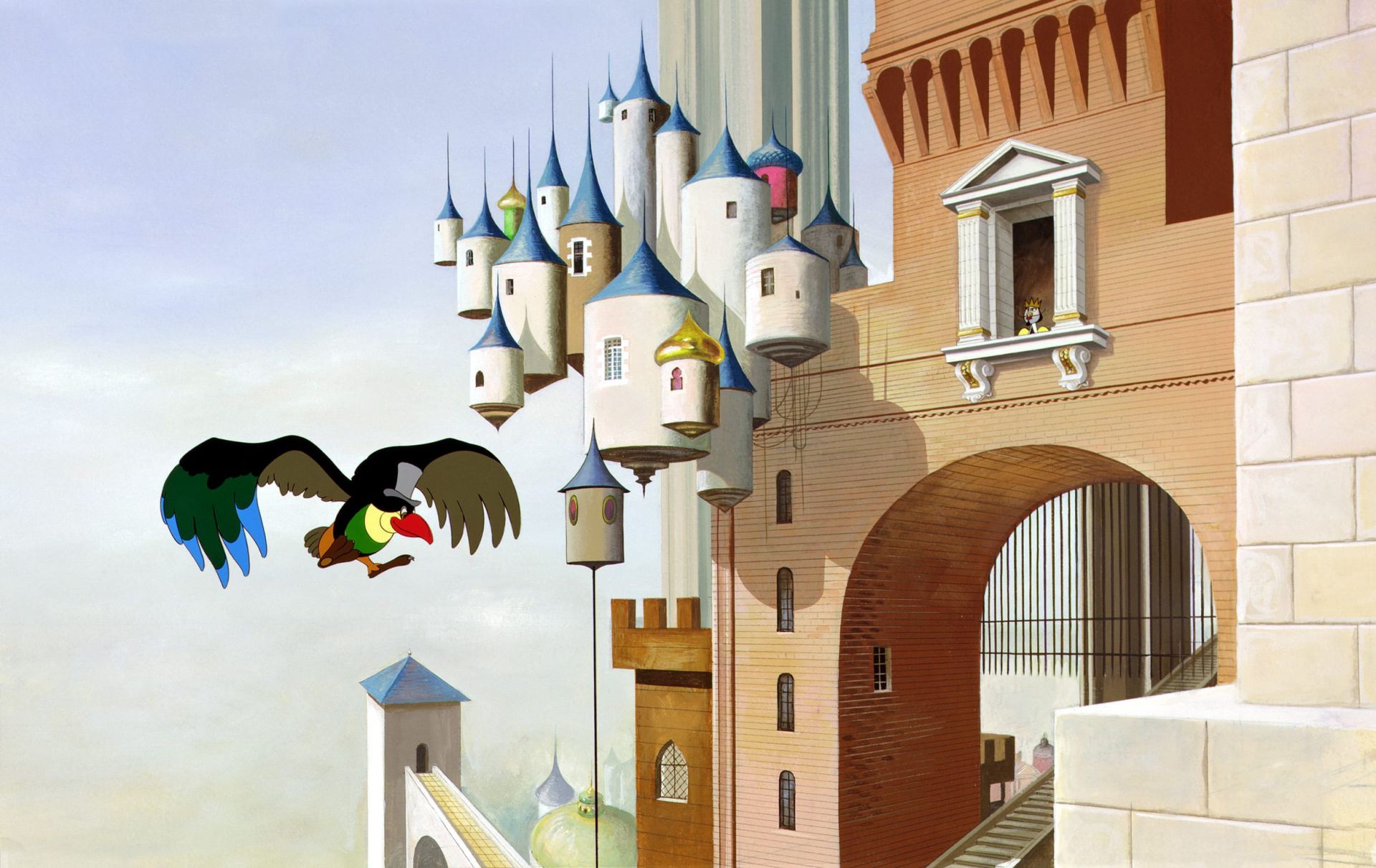 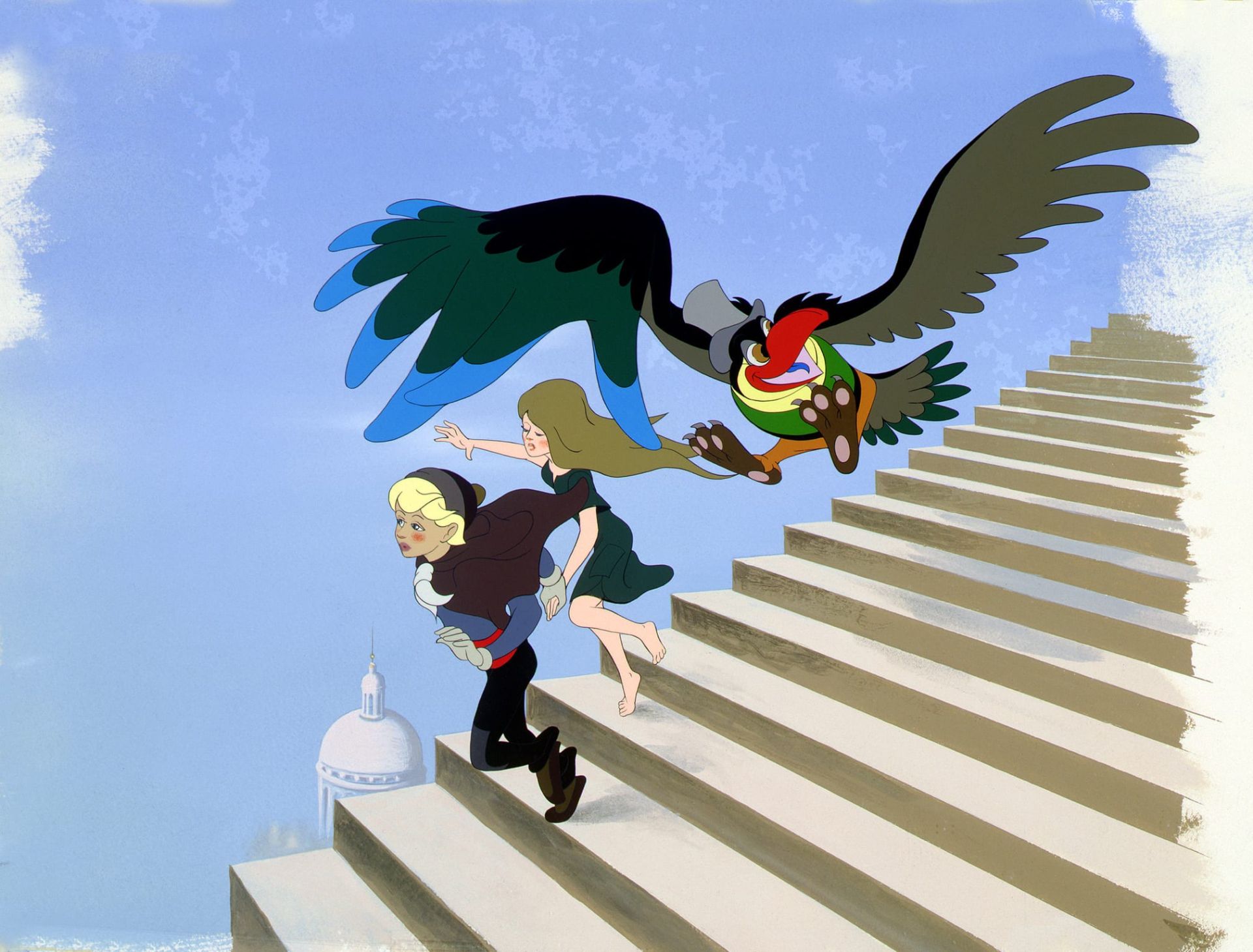 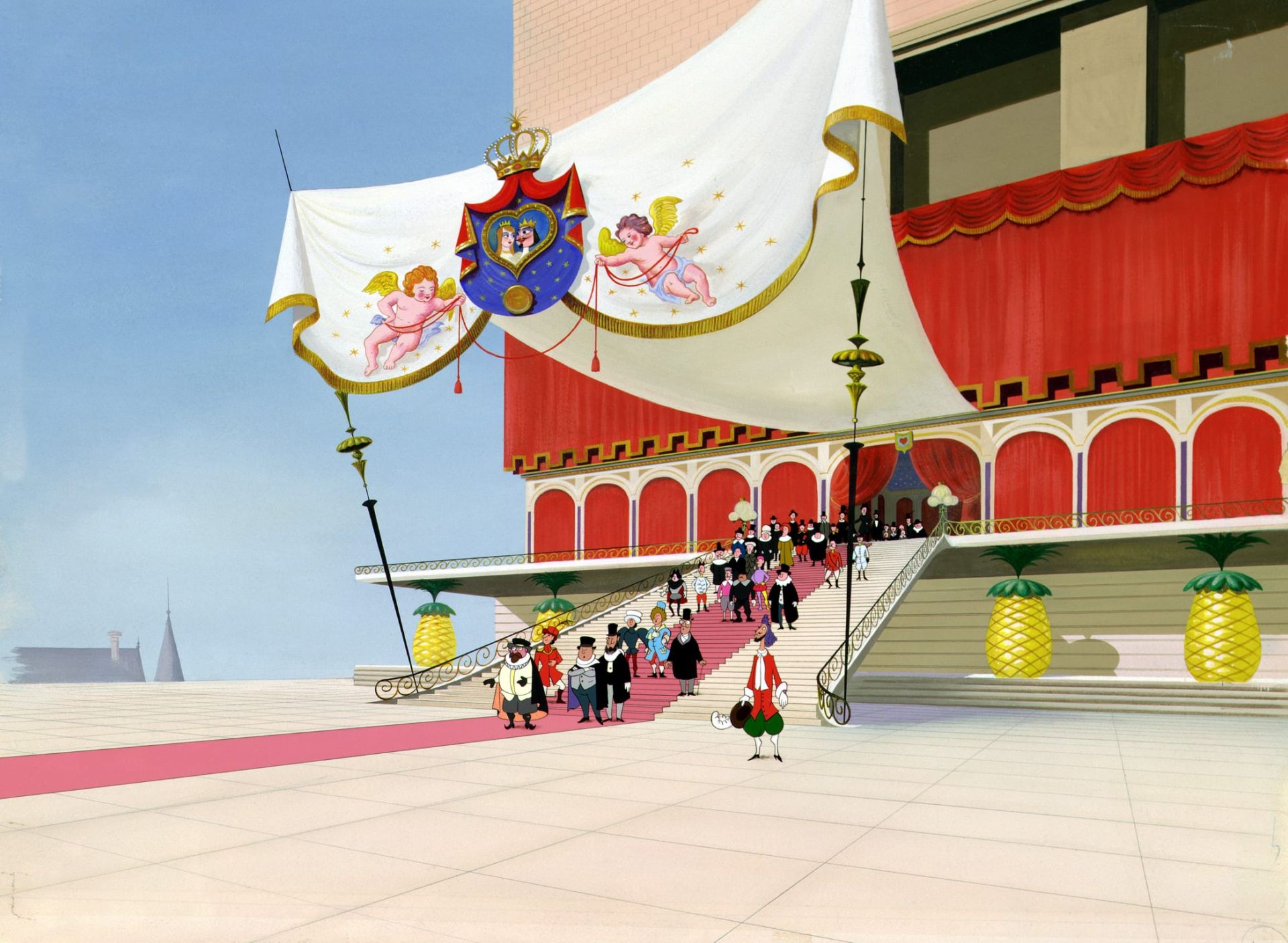 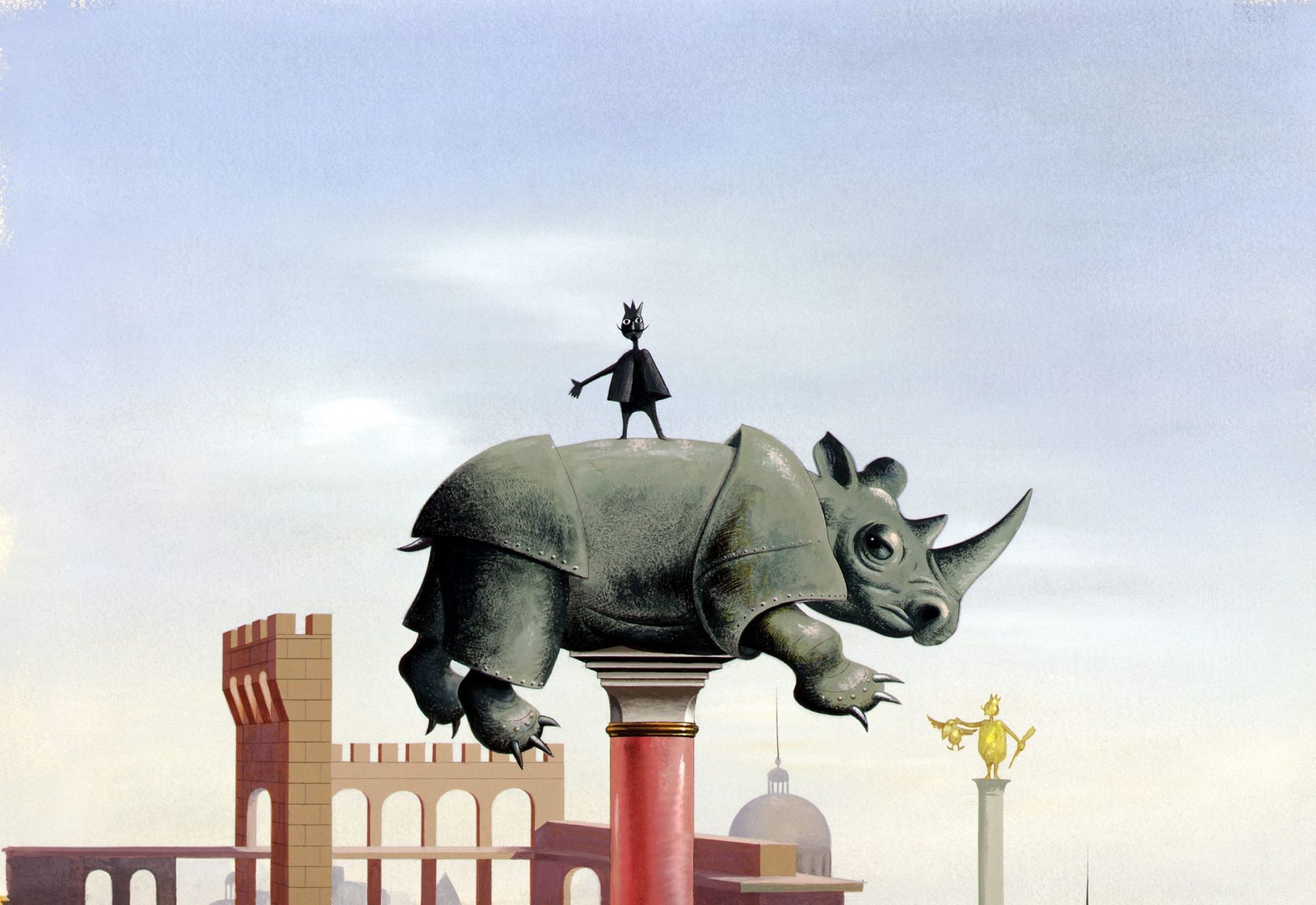 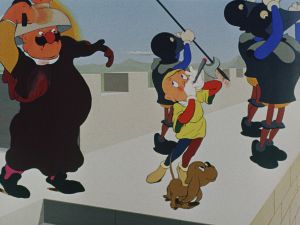 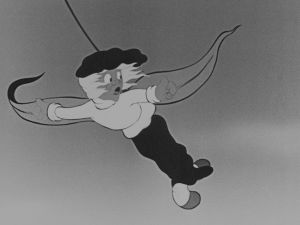 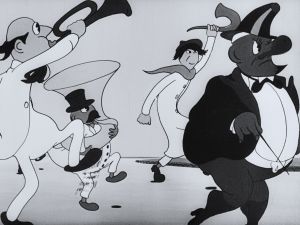 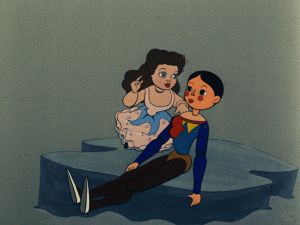 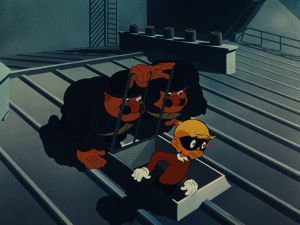 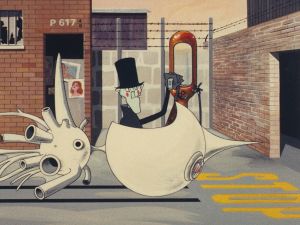 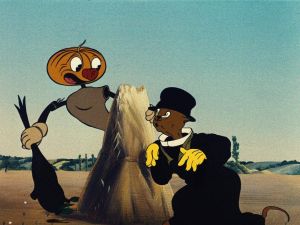 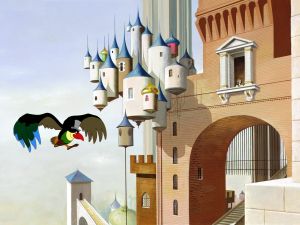 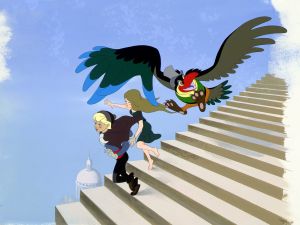 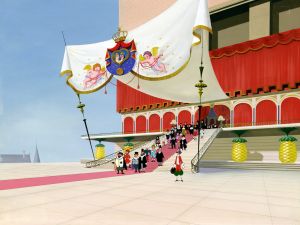 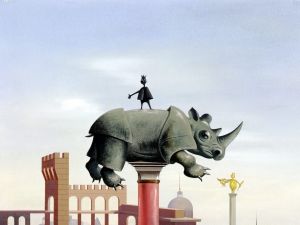 Here in the United States of America, where we once renamed French fries “Freedom Fries,” we like our cartoons the same way we like our cars: made in America (or Japan). It’s a shame, though, that the cartoons of France get so little love from American audiences. French animation is inarguably the oldest of the three aforementioned traditions, and arguably the most instrumental to the development of the medium as we know it. Plus, without the work of one mid-century French animator, the acclaimed works of Studio Ghibli might have never come to be.

That animator was Paul Grimault, a titan of French animated cinema. His masterpiece, Le Roi et l’Oiseau (The King and the Mockingbird, although it has gone by several titles over the course of its lengthy and difficult development history), was long inaccessible to American audiences, but Ghibli co-founders Hayao Miyazaki and Isao Takahata have regularly singled out as an inspiration.

That film and eight newly restored shorts together comprise a centerpiece of the programming at the upcoming Animation First festival, to be held virtually by the New York–based French Institute Alliance Française (FIAF) on February 5-15. And the short films, which are listed as a U.S. premiere under the banner “The Animated World of Paul Grimault,” in particular, have something for everyone.

These short films of Grimault’s, all made between 1942 and 1973 and to be screened chronologically (and on demand for ticket-holders for the duration of the festival), were restored by France’s Centre national du cinéma et de l’image animée (CNC) over the course of roughly three years. Six of the eight are from the 1940s, made with Grimault’s first major creative partner, André Sarrut. The final two both date back to the early 1970s and were collaborations between Grimault and Jacques Prévert, the French poet and screenwriter whose final hours were spent working on the last scene of Le Roi et l’Oiseau. The later works, The Diamond and The Dog Who Loved Music, are more adult-oriented and political, skewering colonialist plunder and the arms trade respectively with a touch of the science-fictional and dystopian. Both fit in neatly with other French animation from the period, including René Laloux’s bizarre 1973 masterwork La Planète sauvage (Fantastic Planet).

The early shorts, on the other hand, would delight audiences of any age, and are nothing short of wondrous. Stylistically, Grimault’s early work feels like a bridge between the finest Walt Disney Company, Metro-Goldwyn-Meyer and Warner Bros. theatrical shorts and the works of Studio Ghibli. Many of the tropes are shared with Grimault’s American contemporaries, from cat and mouse games—with a slower, subtler pacing here than in Tom and Jerry or Road Runner and Wile E. Coyote shorts, allowed for in part by longer runtimes—to reimagined fairy tales to toys coming alive in a toy shop. The emphasis here is on visuals: the snatches of dialogue, while subtitled in English when appropriate, are few and far between, just as they are in many of the earlier American shorts. Animation geeks will be pleased to see how Grimault seems to combine the traditional squash-and-stretch technique with the earlier rubber hose style favored by Fleischer Studios and the earliest Disney cartoons.

While much of the character design feels distinctly Euro-American, informed by France’s bandes dessinées (comics) and the works of American rivals, occasionally a character or setting will come along that feels plucked directly from a Ghibli film. The two gendarmes (police) in Le voleur de paratonnerres (The Lightning Rod Thief) evoke, for instance, the three heads from Spirited Away both in design and in movement, while the flying ship from Les passagers de la Grande Ourse (The Passengers of the Great Bear) would fit just as neatly in Castle in the Sky. And in terms of use of perspective and fluidity of motion, Ghibli’s techniques find a clear forebear here as well.

Still, there is something distinctly French about the sensibilities. Grimault’s humor, in particular, is strange and compelling, blending wry undertones with pure silliness and an almost dadaist sense of satire. My favorite of the films, a black-and-white short Le marchand de notes (The Note Seller), features a merchant with a store like a music box and a face like a crescent moon who sells musical notes. His nemesis, and the short’s hero, is a foolish boy with a Seussian face and a smiley face design on the seat of his pants whose expressions change as the boy wiggles his ass tauntingly at the music man. Musicians wander about throughout the short, tooting on horns that make no noise unless the man sells them notes or driving pianos like they are out-of-control limousines. There is a goose with a bonnet and, for some reason, a dog tied around its neck like a scarf, who eats musical notes and shits them out in an egg from an asshole drawn precisely like an asterisk.

If this all sounds a bit too risqué for the whole family, be assured that it isn’t. Still, The Band Concert this ain’t. But it doesn’t need to be. Like all of Grimault’s shorts offered here, it straddles a few worlds while remaining precisely of its own. Magnifique.

FIAF’s Animation First 2021 runs February 5-15. Tickets can be purchased through fiaf.org for $20.