After directing 10 episodes of the critically acclaimed political drama House of Cards, a show that also earned her eight acting nominations at the Primetime Emmy Awards, Robin Wright was in search of a timely and moving story to make her feature directorial début. Much to her surprise, Wright found exactly what she was looking for in Land, which recently premiered at the Sundance Film Festival.

Written by Jesse Chatham, the survival drama follows the journey of Edee Mathis (Wright), a woman who searches for a new way to live in the wake of a life-altering loss. Unable to come to terms with her new reality, Edee decides to embark on a solitary experience in the remote mountains of Wyoming, where she finds herself unprepared for the harsh realities of wild nature.

Living off the grid, Edee’s struggles seem to compound as the seasons change, but a chance encounter with a local man named Miguel Borras (A Better Life’s Demián Bichir) saves her from certain death in a deserted cabin. Miguel patiently teaches Edee the skills that she needs to survive, and over time, the two kindred and wounded spirits develop a deep friendship that brings grace and healing to them both.

The word “challenging” comes to mind a lot.

“There are so many stories of loss and pain in movies and in our daily lives,” Wright writes in her director’s statement. “Frequently, there is a fundamental question asked: How do we get through it? That journey is never going to be the same for everyone – yet too often we, and those closest to us, have expectations about how we manage our grief and when we will be ‘better.’ The time and space you need isn’t individualized.

“I loved this script right away because that idea is a central theme. After experiencing a life-altering event, our character, Edee, wants to erase herself and her past life in an attempt to deal with her pain. The road Edee takes is fraught with life-threatening difficulty, and she chooses—every single day—to do the most basic human thing: to fight to survive.”

In a recent conversation over Zoom, Wright talks to Observer about the decision to act in her feature-directing debut, the logistical challenges of shooting all four seasons in less than a month, and the opportunity to star opposite Bichir in a film that really captures the power of friendship and the resilience of the human spirit.

Observer: One of the biggest things that your fellow cast and crew members remarked during the shoot was how you always managed to switch between acting and directing seamlessly. Did you always know that you wanted to play both roles?

Robin Wright: Well, first of all, I was never intending to be in it. (Laughs.) That just sort of had to happen because we had this very slim window in which we got financed and we had to start shooting right away to catch the weather that we needed. We couldn’t take the risk. What if we don’t cast it in time? And then we might lose our window.

Anyway, the producers were just like, “Well, Robin, I think you’re just gonna have to do it because you’re gonna be there anyway.” I was like, “Okay.” (Laughs.) It’s all about having an incredible, experienced team around you—and boy, did I ever have one. Just seasoned veterans, three female producers had my back every day. They were in the tent watching playbacks, and they were, in essence, my co-directors when I was in front of the camera.

You got to film this project in just 29 days on a mountain in Alberta, Canada, and you managed to capture pretty much all four seasons. Can you talk about the incredible weather challenges that you faced while filming?

Yeah, the word “challenging” comes to mind a lot. (Laughs.) We did make the executive decision to build the cabin and put it on the top of a mountain, 8,000 feet up, and shoot in the elements, so that you really, as a viewer, felt like you were there. It was the most authentic way to go, obviously, and nature is such a character in this movie.

Did you have to quickly readjust your plans to fit with the weather patterns?

Yeah, that would happen every couple of hours sometimes. (Laughs.) We’d be set-up and scheduled to shoot x amount of scenes in sunny weather and green grass, and then we’d get some message saying: “Beware! The Chinook winds are coming! We’re gonna have to lock down equipment or it’ll go flying like [The] Wizard of Oz. (Laughs.) And then we would have to jump in other wardrobe if the snow suddenly and unexpectedly dumped on us. [There were] very unpredictable weather patterns up there, but we got all four seasons in 29 days. That’s how blessed we were by the weather angels.

It was still dark out, freezing cold. All of a sudden, a bear just walks up to that trailer and starts trying to open the door.

I heard you couldn’t bring a trained bear onto the set because there were so many wild bears roaming around and a wild one even tried to get into the craft services trailer. Do you have any particularly memorable encounters with wildlife from this film?

Oh, on a daily basis. One bear, he found the craft service table one day and grabbed a hamburger and he wanted to come back every day for McDonald’s. (Laughs.) He was like, “I’m coming back here!” We did have our bear whisperer on set all the time, and there were certain moments where we had to stop shooting and be very still because the bear was in the front yard of the cabin, in the trees. We were in the wild.

I also heard that one of your crew members had a particularly close encounter with a bear early one morning, which is a moment that none of you will ever forget.

That was actually one of the scariest moments. The poor gal, she was preparing to get food ready in the trailer and it was 5 in the morning. It was still dark out, freezing cold. All of a sudden, a bear just walks up to that trailer and starts trying to open the door. And as we all know, they can open doors. She was, of course, frightened out of her mind, but man, was she strong-willed. She screamed at the top of her lungs and banged pots and pans together until the bear ran away. But it’s scary being out there. That’s not our natural habitat. (Laughs.) We were kind of stepping into the grounds of somebody else’s home.

This was definitely both an emotionally and physically draining project because you had to do a lot of the tasks that Edee did to survive. Has this film really given you a new appreciation for the beauty and harshness of nature?

You put it very succinctly, yes. It’s majestic and beautiful and treacherous at the same time.

Do you think you would be self-sufficient enough to live in the woods like she did?

I think I could do a weekend. (Laughs.) I don’t know if I could do two-and-a-half years without my mountain friend, Miguel. I would definitely need him if I was up there longer.

Speaking of Miguel, we can’t talk about this movie without talking about the man who played him, Demián Bichir, whom you described as a “priest” in one of your past interviews. What was your favorite part of working with him and how do you think you were able to connect with each other on an emotional level in this film?

Let’s just talk about Demián Bichir. He’s just one of the most soulful people I’ve ever come across. He was born to play this part. He came for a meeting and he was the first actor I met because it was calling for a Hispanic actor in the script, and in the original script, it was not. You have these meetings with actors, and he walked in and it was as if we had known each other our whole lives. We instantly had the chemistry that we have in this movie, like we were old friends forever, and he understood this story so deeply.

He understood the character of Miguel, of how frugal he is with his words. He only speaks when it’s necessary. He’s very patient; he’s very respectful of Edee’s wishes to be private. They don’t have to know everything about each other and they still form this incredible bond in this movie, which is rarely seen, I think, in movies—this beautiful, platonic friendship.

I particularly enjoyed you and Demián’s renditions of “Everybody Wants to Rule the World” in the film. Why did you decide to use that song and how were you able to maintain some levity together in an otherwise very dark film?

Well, the levity was actually implemented later. We just felt that this character that is so quiet and such a man of nature has such a sweet, ironic sense of humor. They get each other, they get each other in this silence, if you know what I mean. That is what we were really trying to achieve, so we trimmed a lot of the dialogue that was originally written, which happens a lot of the time in movies. You trim or you add as you start to form by doing the scenes. You start to form this dynamic with the other character, and we just kept finding that less was more. You didn’t need to say so much. Just being together and experiencing him guiding her through a difficult time and giving her the faith that she’s gonna come out on the other side and see the light. So, it’s about human connection and human kindness and human resilience.

Finally, as someone who has been part of the business for so long, what do you think has to be done for Hollywood to finally appreciate the outstanding contributions of female directors?

Well, I think it’s definitely necessary to continue amplifying the voice and that means doing it on your own as a female director. You do have to push harder and you do have to speak louder, and I think it’s the perseverance that’s going to be necessary. It’s that you don’t give up and you have conviction and commitment to whatever your vision is of that project. If you’re competing with someone else for a movie, it’s definitely more work for us. But it’s changing and it’s going to continue to grow because that crack in the glass ceiling happened, and it’s only going to get wider.

Land premiered on January 31 at the 2021 Sundance Film Festival and will be available in theaters February 12. 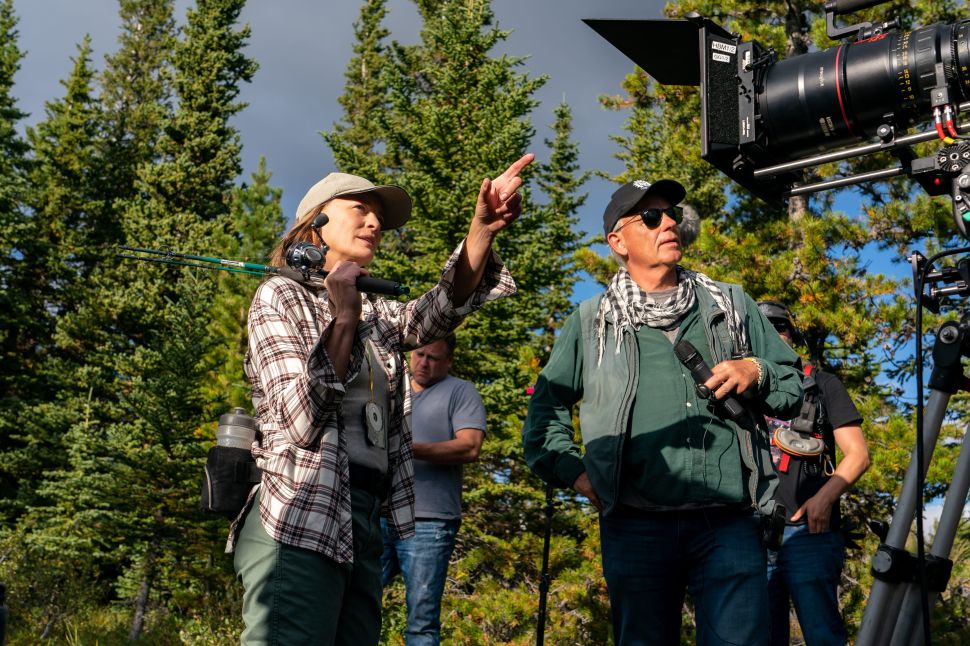