Salman Toor’s first solo show at the Whitney Museum, “How Will I Know”, is really something to see. The Pakistan-born artist’s exhibition considers the role of the queer diaspora through the lens of the Middle East and South East Asia. Drawing on domestic spaces interspersed with deeply intimate moments, Toor’s canvases excite and pique interest with every stroke. Many of the works consist of a mashup of modern references such as Vans sneakers, Apple computers, cell phones, and charging cords with a nod to art history. The show also shares the same name with the 1985 Whitney Houston single. The 16 works featured in “How Will I Know“, were painted in the span of one year from 2019-2020 with the exception of one piece from 2018, which is an impressive feat given the level of detail in each painting.

Toor’s paintings are deeply personal and depict isolation in very intimate ways. His brush strokes are lush and create pockets of social movements that are illuminated by light, color, and social circumstances which call into attention larger sociocultural circumstances. With references being made to social issues such as the Muslim Ban put forth by the Trump administration in 2017, issues of surveillance and security as it relates to people of color, queerness and more, Toor interweaves these with  historical art references. Similar to the social scenes that French Impressionist masters such as Renoir and Manet would create, Toor paints work that have social scenes that fold into one another adding another layer of complexity to the art.

There is a level of meta-ness to Toor’s work that exists within the way he situates people in relationship to themselves and the social contexts they are within. Like Renoir’s Luncheon of the Boating Party (1880-81), there are many things happening within the space that the canvas lets us peer into – a woman leans on a railing while watching other tables, another woman plays with her dog. A man sits backwards on his chair while another female diner looks longingly at him while another man looks at her in a similar fashion. Toor captures these same kinds of moments that are both collectivity and isolation and leads you to think about what a furtive state of being is like for them.

With Bar Boy, Toor takes the viewer through an intimate portrait of a bar and all its inner workings. A modern bar scene reveals many of the interpersonal relationships that happen within this space, and now in the era of COVID-19, this seems very far off. A recurring male subject is at the center of the canvas, clad in a purple hat, his face is lit by a cell phone. Other bar goers are awash in vibrant green hues that fade from a vivid emerald, to sea foam to shades of citron and chartreuse that finds its way into many of Toor’s paintings.

His play with light in this work specifically, and also within the others on view, is exceptional. Some bar patrons’ faces are lit from Christmas lights that decorate the shelves, another lit by an exit sign. Some people are dancing, others mid kiss. There are details in this painting that are meant to get lost in. One person is sleeping, another is in an embrace with their friend or lover, and others are in deep conversation. Bar Boy has all the makings of what an average weekend night used to be like in any bar across the globe, but today it feels like a suspended moment in time, a thing of the past.

There is an accessibility to Toor’s work that makes it instantly recognizable and also removed. There is an intimacy that pulls you into the gravitational force that Toor wields into the inner worlds his paintings create. In The Star, the same male subject appears again but this time is the center of attention in another very recognizable scene. Behind an oval mirror, a man sits in an oversized pink furry jacket in black jeans and a brown shirt, while a stylist applies hair spray only inches from his face, and a makeup artist can be seen touching him up. A fourth person with long dark hair and bangs can be seen in the far left hand corner looking at as the star is being primped and preened on as we can see him looking at himself looking at the viewer. This is putting the spotlight on the elements used to help create the persona of the star.

Sleeping Boy and Bedroom Boy are two small portraits of the male subject in bed. In both small scale works the subject is depicted naked and sprawled out. In Bedroom Boy, the man can be seen propped up against his pillow, with a mischievous look on his face as his camera is again lit by a cell phone. This painting in particular seems to be in direct conversation with Manet’s Olympia.  While Manet famously has explored the female nude in his work, Olympia is arguably his most well known work. In it, a woman is depicted laying on a bed surrounded by white pillows and covers. Her hand strategically covers her genitals as she looks straight ahead defiantly. Her hair is an updo with a flower in her right ear and there is a black ribbon tied in a bow like a necklace around her neck, as another woman, a maid, can be seen in the frame of the painting bringing in more flowers. Like Manet’s Olympia, Toor has created his own 21st-century queer version.

With a phone in his hand, as he leans into his pillow, the man seems to be taking a nude selfie, or perhaps is on a video call or streaming a show. These domestic scenes add a level of voyeurism given the way the scene is constructed and how the use of screens are intimately a part of it. You are viewing the subject of the painting in the unselfconscious way they are inhabiting their private spaces and the paintings become about this tension between public and private, how people reveal themselves both personally and digitally.

In Sleeping Boy, the same man can be seen laying on the same comforter but perhaps it is another bed. A bookcase decorated with Christmas lights can be seen in the corner against a lavender wall backdrop. He is laying down, genitals exposed with an arm lazily draped on his nightstand table, with his eyes half closed looking at his MacBook.

There is a refined elegance to the shaggy haired, lanky men Toor depicts in his paintings. They tap into the banality of every day life but go far beyond that. They situate brown, queer men at the focal point and are considering both the lived and the imagined existence of who they are with the realities of the world today. Toor’s cultural fluency, play with art history, and ability to offer a nuanced critique of queerness and the world today is setting the stage for a long career ahead of himself. 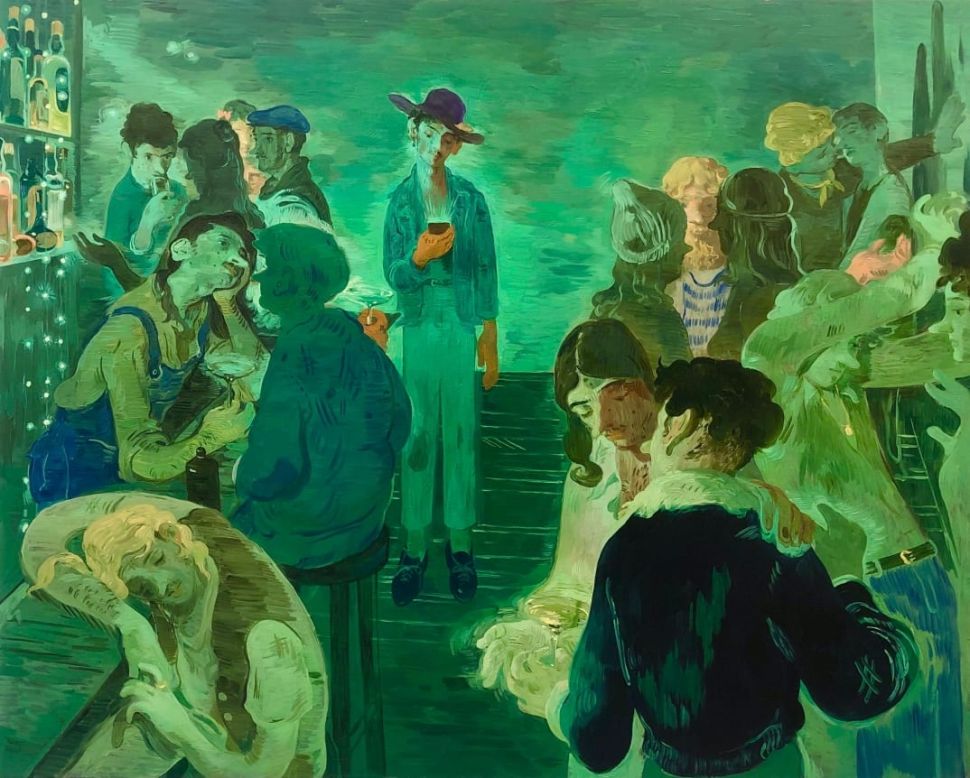