Last summer only has exacerbated what can be described as the hyper-visibility and invisibility of Black people and culture. The Black Lives Matter movement and the catalysts of radical change have reminded Black communities that we are constantly being surveilled while also being ignored. The historical look on Black art is no exception. Sam Pollard’s newest documentary, Black Art: In the Absence of Light highlights the late David Driskell’s legacy as an artist and curator, particularly for the monumental 1976 “Two Centuries of Black Art,” exhibition shown at the LA County Museum of Art.

In the film’s opening scene David Driskell is in an interview with Tom Brokaw, introducing this exhibition that drew a large attendance and continues to leave its handprint on artists to come. Driskell says “it more or less isolates the black artist from the mainstream of American art” when Black art is set apart and that Black art in the Western canon is only set aside because it is not witnessed by the “majority” audience. For Black artists like Kerry James Marshall who got to see the exhibition in person, and younger artists who owned the book of the exhibit like Sanford Biggers and Jordan Casteel, saying it gave her a “sense of belonging,” it becomes clear how important visibility is when it is in the hands of the right people.

Preceding this landmark exhibition was the “Harlem On My Mind” exhibition at the Metropolitan Museum of Art of 1969 which raised protest from the community who did not have authorship of their own stories and culture. The film shows then-Met curator Thomas Hoving saying that he found the exhibition to be “true” and an “honest portrayal of a very difficult subject.” But museums should belong to the community. The backlash proved the point that Blackness is not to be generalized by those who have never experienced it, nor should it be observed and cherry-picked for the aforementioned “majority” audience that David Driskell described.

For Black people, white Western art has continued to put the Black subject in the background or in a position of servitude. Black artists benefit from having the material and emotional means to support their work. This means transforming the conversation on who depicts us even in our everyday life and who curates the collections of Black art. This is necessary for Black people to have autonomy over our own narratives in art and depict the Black lives that we know.

From Driskell, bleeds down a love and dedication to the movement of Black art that we see in the film from artists such as Lyle Ashton Harris, Carrie Mae Weems, Kara Walker, Kehinde Wiley, Amy Sherald and more who have benefited from Driskell’s work. And other early movement starters such as Faith Ringgold who has hammered away to elongate the conversation on Black women and radical voices. It culminates as a stern, supporting love letter that reminds us that in order for Black art to persist, we have to commit to understanding it, put people like us behind displaying it and recognize that Black artistic voices have an indelible mark on American cultural history and it will remain that way.

For Observer, I had the chance to speak with artist Lyle Ashton Harris, who was featured in the film particularly for his work in the “Black Male” exhibit shown at the Whitney Museum from 1994-1995, and with director Sam Pollard, about what nuanced Black art is and what this film means in looking towards the direction of Black art in the future.

Observer: David Driskell talks about taking issue with Black art being referred to as such and discusses Black art being in the mainstream. So, what is nuanced Black art to you?
Lyle Ashton Harris: It’s complicated. The idea of Black art is an American art form. It’s complicated because historically people have referred to Black art to keep it from the mainstream. That said, he [Driskell] found it necessary to create a voice to challenge a canon. To present two centuries of African American art and culture and design, is the foundation to influence any sphere of American life.

So, based on that, how do you feel about museums today attempting to remedy their racist pasts? Do you think it’s being approached effectively and how does that impact your work being shown?
Ashton Harris: I think a lot of institutions are doing the work, maybe some more than others, but it’s important to give credit where it’s due. But I think it’s also important to see this did not just begin a couple of years ago. I think what the film does quite poetically under the direction of Sam Pollard is to historicize that this is something that is not faddish and new but that curators have been working tirelessly to bring art created by African Americans to a wider audience. It has been driven by artists to bring pressure to institutions but we also have to credit for example Black Lives Matter. Around those current protests, in context of artists [such as] Faith Ringgold who have historically challenged institutions such as the Met and the MoMa etc, it’s important to see it in a legacy of protest and not somehow isolated. I think all this stuff is cumulative and that this is an extraordinary time.

You mentioned “cumulative.” Do you find that Black art is cumulative?
Ashton Harris: I do feel that we have radically diverse experiences and communities that exist within the term Black culture period but I feel because of the experience of what it means to be a Black American in the confines of America of the last 400 years, despite all the differences and plurality of that I think there are certain repeated formations of white supremacy [etc.] It’s interesting how artists have responded to that in terms of literature but also visual culture over the last centuries and decades.

Do you feel a responsibility to be a voice as a Black, queer, artist within the Black art realm?
Ashton Harris: For better or for worse my work was taken up at a very young age. The work that is in the film that was in Thelma Golden’s landmark exhibition “Black Male” of 1994, so imagine me being in the second semester of grad school making a work that was at that time there was an early formation of queer identity and also a period of ACT UP [AIDS Coalition to Unleash Power] in terms of civil disobedience against the lack of attention to people affected by HIV. I [also] remember at that time there had been a cross burning not far from the campus. So, I think in a way it’s a confluence of the multiplicity of those types of experiences that I felt as a young African American who had lived in Africa as a child, also someone who is queer, also someone whose parents were involved in ANC [African National Congress], there was a reaction to that.

I wanted you to speak a bit on David Driskell’s legacy and what that means to you and what it means for you to be included in this film?
Ashton Harris: David was a friend of mine. I’m deeply grateful to have met him. As Carrie Mae Weems has spoken about, at any cultural event or opening, etc., you looked and David would be there with his nephew Rodney suited up. In [2014] I was awarded the Driskell Award which was a big honor for me because I had received at that point the Guggenheim [Fellowship] and several other awards but there was something about being brought into that particular canon, particularly as a young, Black queer [person] with a radical vision. In a way, I felt outside of the community and there was something about getting his anointing considering his legacy and his gentleness. So, for me he represents that level of openness that goes back generations.

What moved you to make this documentary and choose the collection of artists and figures that you did?
Sam Pollard: We initially thought we should frame the documentary around Thelma’s [Golden] 1994 “Black Male” exhibit. But we thought that was too narrow and she came back and said, “why don’t you look at David Driskell’s exhibit that he curated in 1976.” Right before the New Year in January 2019 I went to his [Driskell’s] apartment, we met, we had a nice dinner, he told me how the exhibit came out and how he became a curator, the challenges he faced, and so he was on board. After that first meeting with David, I sat down with the producer and we talked about who were some of the artists that we wanted to put into the film, because we felt it should not only be about “Two Centuries” but to look at the influence and the impact [it] had on contemporary African American art.

I loved your film MLK/FBI, how does this sit in conversation with that discussion on public perception of Black people and culture and how we perceive ourselves?
Pollard: MLK/FBI and this film, it’s basically me as Sam Pollard, the filmmaker, documenting the African American experience, politically, culturally and socially. I think that’s something I learned many years ago from St. Clair Bourne who is a major influence and mentor of mine, that we have to tell our stories. For me the challenge is always how to tell them in a different way and give them a different perspective. Now, I grew up in the 60s and 70s and I was familiar with some of the older artists from “Two Centuries” like Elizabeth Catlett, Romare Bearden, Jacob Lawrence [etc.] so this was giving me an opportunity to dig into some of the contemporary artists who I was also familiar with. It was an opportunity to meld both these generations from my perspective.

How do you feel about museums today and their efforts to be more “diverse” and “inclusionary”?
Pollard: It means that they’re recognizing the importance of some of these artists. The question is will it sustain itself. America has this tendency to say “Ah, look at all these wonderful Black artists and dancers and filmmakers and painters and sculptors. They should be front and center.” There’s this rush to represent and present them all. Then all of a sudden, a few years later it dies down. We also should have the ability to exhibit our own stuff, our own galleries, our own museums. I feel like we have to wait for the mainstream institutions to recognize this. 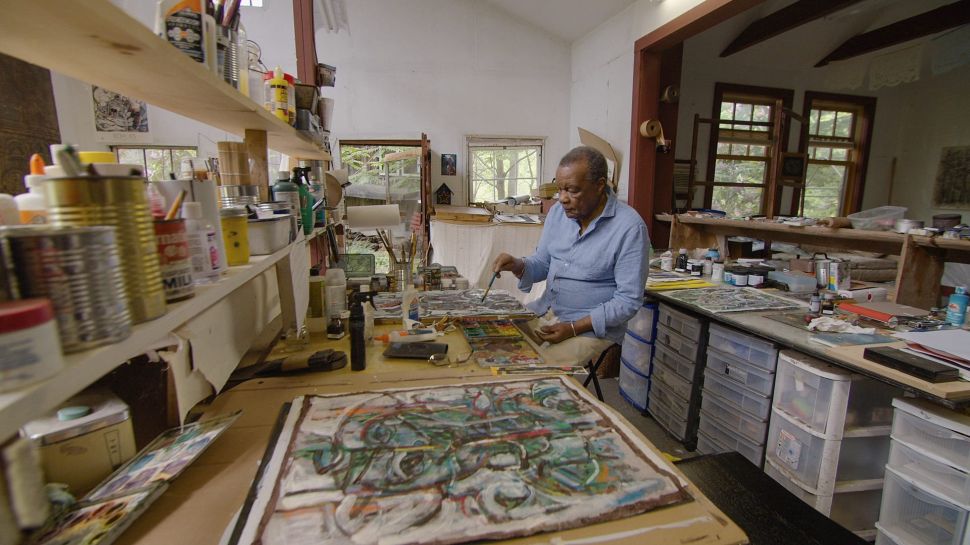