Social media platforms have a moderation problem. It’s not a secret and marginalized people have been begging them to do something about it for years. Ham-fisted algorithms have been implemented alongside community reporting options, but it’s nowhere near enough. The damage has been done.

Forced to reckon with their role in hosting the likes of QAnon conspiracy theorists, neo-Nazis, and politicians pandering to white supremacist separatists, top social media platforms—especially Twitter—have opted for a scorched-earth policy of mass deletion. Millions of accounts disappeared overnight while Amazon Web Services (AWS), the Apple App Store, and the Google Play Store have clamped down on Parler, the app favored by right-wing extremists for its role in planning the Capitol insurrection.

And now, proponents of the First Amendment are worried.

For a lot of people, the fire that former President, Donald Trump lit under the Communications Decency Act (1996), commonly referred to as Section 230, is burning brighter than ever. Many legal experts, however, believe that the attacks on Section 230 is indicative of a larger attack on the first amendment itself.

“Section 230 embodies First Amendment rights in the Digital Age,” says Lawrence Walters, a First Amendment attorney and the managing partner at Walters Law Group. “The immunities and content moderation rights granted by Section 230 are arguably required by the constitution. However, Section 230 allows online platforms to operate without the constant threat of litigation that would exist if the statute was repealed or changed.”

For many sex workers, the handwringing and talk of censorship is nothing new. Sex workers have been waging a silent war against suppression and censorship tactics like moralizing arguments, shadowbanning, algorithmic bias, and intentionally vague Terms of Service for even longer than these platforms have existed.

California’s Prop 60, which would have put pornography in the crosshairs of all “moralist” citizen crusaders, came dangerously close to passing in 2016. The seizure and subsequent closure of Backpage was foreshadowed by the demise of the physical back pages of The Village Voice. In the wake of Twitter’s mass purge of extremists, the National Center on Sexual Exploitation (NCOSE), has seized on this rare display of contrition to further chip away at Section 230 in the courts.

The NCOSE lawsuit seems harmless on its face and no one wants to be seen arguing that protecting children is a bad thing. But it is dangerously short-sighted, much like the legislation that informs it. The Stop Enabling Sex Traffickers and Fight Online Sex Trafficking Acts (SESTA/FOSTA), passed in April 2018, purported to combat sex trafficking while contributing to a rise in trafficking, increased violence against sex workers, and greater suppression and de-platforming of adult content creators. Further delegitimization and stigmatization is a genuine concern and not just for sex workers.

Sex educators, LGBT+ people, fat/plus-sized people, and Black people have all expressed concerns about the response of “Big Tech” to attacks on Section 230 and online expression. Certainly, corporations are permitted to establish Terms of Use that align with their own ethics, but the worry is that moderation changes and crackdowns on vaguely defined “explicit” content are exclusively targeted at the already marginalized.

Both Salty Magazine and Hacking//Hustling have conducted studies on the impacts of increasingly limiting content moderation policies on social media, and both have come to the same conclusion: legislative policy, no matter how well-intentioned, has contributed to the de-platforming and erasure of marginalized voices on social media.

It may feel tedious to rehash what most of us have accepted as true. We know SESTA/FOSTA was a failure. We know that decriminalization is the best way forward. But we haven’t reached a critical mass of what should be common sense knowledge. The Stop Internet Sexual Exploitation act (SISEA), introduced by Sen. Jeff Merkley (D-Ore.), is more of the same conflation of consensual sex work and already criminalized trafficking of non-consenting adults and minors. And so unfortunately, that historical context is necessary to understand exactly how bleak the future looks.

We haven’t survived SESTA/FOSTA. The attacks on free expression, which some—like Lorelei Lee (they/them), a sex worker, organizer, and writer—say is miscategorized as an attack on the first amendment, have only worsened.

“Shadowbanning, account closures, refusals to serve by platforms that control access to everything from housing listings to financial services—this is much more than censorship, this is exclusion from social membership,” Lee tells Observer. “And it is clear that exclusion happens not based on a statement a person makes on their account, but based on how they’ve been profiled, using numerous data points, by platforms that person is trying to access.”

Yes, SISEA failed to pass the committee vote, but only because it was indefensible from a constitutional standpoint, according to Walters. The political will to further marginalize and suppress sex workers is pervasive and ever-present. Backpage was dismantled under the guise of protecting trafficking victims, despite Backpage’s leadership working alongside federal law enforcement to root out traffickers on the site. SESTA/FOSTA passed with an overwhelming bipartisan majority, despite warnings from sex workers, medical professionals, human rights advocates, and politicians that it would cause undue harm to the victims it purported to serve. Knowing that, it shouldn’t surprise anyone that Sen. Merkley fully intends to reintroduce SISEA.

In Lee’s opinion, the current conversation on Section 230 isn’t even the biggest problem. “We could probably use some reimagining of how the internet that has come to exist should interact with legal mechanisms and with human rights paradigms,” she says, but it is a distraction from the actual outcomes of continued legislative overreach. “It’s about demonizing, delegitimizing, and stigmatizing people in the sex trades while glorifying empty Congressional actions that actually harm the people they claim to be helping.”

While the creators of hashtags like #TraffickingHub and #cancelporn claim to speak for those voices, they contribute to the conflation of consent and victimhood, erasing both in the process and encouraging both practice and policy that pits disenfranchised groups against each other for survival. Walters notes that current legislative efforts like SISEA puts the onus of ethical distribution on performers and independent creators rather than multi-billion dollar corporations like MindGeek, Facebook, Twitter, and Alphabet (Google), while doing little to address actual problems with verifying consent.

To be clear, sex workers are not opposed to more robust protections for trafficking victims or a change in the way that platforms moderate hateful, dangerous content. Sex workers are not opposed to a future where marginalized people are able to exist peacefully online alongside efforts to root out those who prey on vulnerable people. Rather, we would simply like to be considered and included in conversations and legislative planning sessions.

“We need to challenge the dominant narratives about people in the sex trades (which includes sex workers, survivors, and sex working survivors), so that both Congress and the general public understand our real needs and stop making gestures that are just symbolic and harmful,” Lee says. “And we need to ensure that impacted people are comprehensively (not just in a tokenizing or cherry-picked way) involved in creating legislation that impacts them.”

The outlook is not completely bleak. If the current socio-political climate is to be believed, changing attitudes about sex work will prevail. Washtenaw County, Michigan, home of Ann Arbor and the University of Michigan, has a new prosecutor, Eli Savit, who has announced that he will not prosecute sex workers. Eliza Orlins, a Manhattan District Attorney candidate, has outlined a comprehensive plan for incremental steps towards decriminalization of sex work. In Allegheny County, NY, Lisa Middleman challenged longtime District Attorney, Stephen Zappala, on his history of prosecuting sex workers for possessing cellphones.

It’s not just local, either. Former presidential candidate and current New York City mayoral candidate Andrew Yang has announced his support for the full decriminalization of sex work, a pivot from his earlier endorsement of the Nordic model. And Sen. Merkley says that he is not interested in harming sex workers in his quest to protect trafficking victims, but it is difficult to envision an idyllic future when these claims have been made in the past but sex workers continue to be denied a seat at the proverbial table.

Still, while talk represents some progress, it’s the laws themselves that have to be changed. “Sex workers and activists who are paying attention at all are already living in a pretty traumatized state of survival,” Lee says. “Folks know intimately how lawmakers are capable of harming them.” 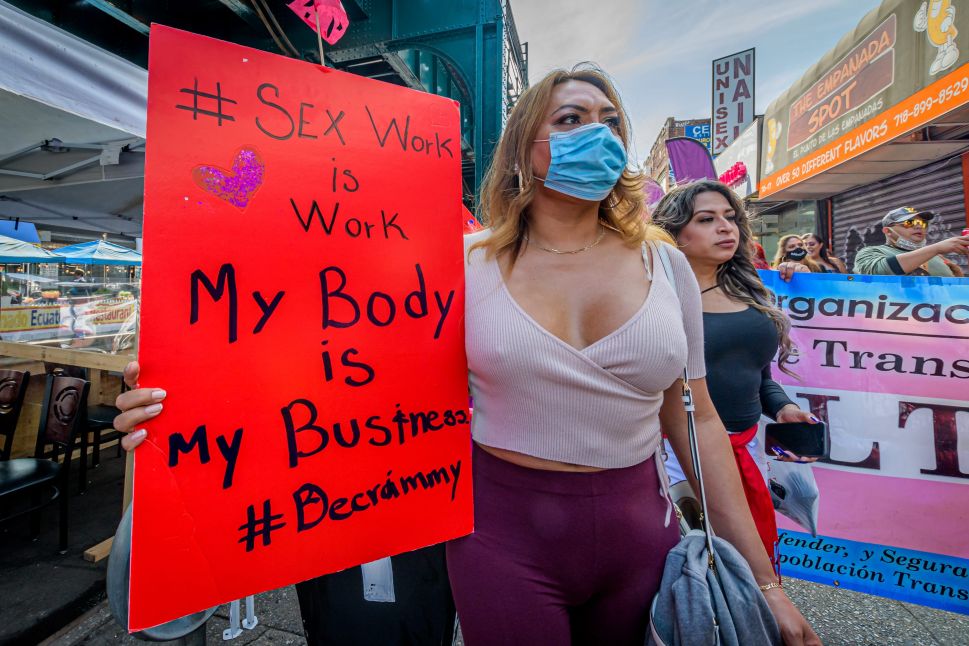