With The United States vs. Billie Holiday, director Lee Daniels and screenwriter Suzan-Lori Parks are trying to make a point; star Andra Day, meanwhile, is trying cast a spell.

Both may be largely successful, but for large chunks of the new film—which becomes available for streaming on Hulu starting Feb. 26— the filmmakers and lead actor seem at cross-purposes. The Precious director’s heavy-handed choices—most notably his cartoonish depiction of the snide and racist feds—are every bit as blunt and obvious as Day’s almost mystical evocation of Holiday’s impossible to categorize mix of fragility and defiance is subtle and enchanting.

The argument Daniels keeps hammering home like an overzealous prosecutor—namely that Holiday was an early casualty of the United State’s failed war on drugs—is convincing, even important. But he harps on it so relentlessly, returning to it again and again to the point that he squeezes the life from the margins of the film.

Major characters drift in and out. Rather than fully materialize, relationships become footnotes and trivia question answers.

If you had not known going in that one of Holiday’s greatest artistic partnerships was with the cool-toned tenor saxophonist Lester Young (played by Everybody Hates Chris star Tyler James Williams in the ultimate “do-you-feel-old-yet” bit of casting), you’d never guess it from what is on display here. The great actor Rob Morgan is criminally underused, showing up late to the party as the abusive mob enforcer Louis McKay, whom Holiday married in 1957. Played by Natasha Lyonne, Holiday’s rumored lover Tallulah Bankhead shows up for a few puffs of a cigarette and some wafts of indignation, but you get no sense of their relationship and what sustained it.

Even Holiday’s storied pitbull Mister gets barely an ear scratch.

Instead, the central connection that Holiday makes in the film centers more on Daniels’ argument than on the singer’s actual life. It is with Jimmy Fletcher, an increasingly conflicted federal agent sent by his dastardly bosses to bust the heroin-addicted Holiday. Played by Trevante Rhodes, even he disappears for a large swath of the film.

As he proved in the final third of Moonlight, few actors on screen can stare at another character with as much smolder as Rhodes; but while he brings some badly needed heat to the proceedings, this plot point sheds little light on our understanding of Holiday.

Frustrating as all of this might be, almost none of it matters: Andra Day is just that good. You feel the late genius through the way Day carries her body, so lissome yet creaking with the weight of both her talent and addiction. The “Rise Up” singer not only matches our imagination’s version of Holiday, but somehow beats it: she seems so present yet ethereally sozzled in a manner that suggests she may be operating on another plane.

And my goodness, the songs.

“Strange Fruit” and Holiday’s insistence on performing Abel Meeropol’s anti-lynching anthem despite the increasingly draconian demands of both the U.S. government and her handlers is a central focus of the film’s story. While Day sings it wonderfully, equally moving are her “Lover Man (Oh, Where Can You Be),” “Ain’t Nobody’s Business If I Do” and especially “All of Me.”

There are times when you wish The United States vs. Billie Holiday were a musical revue and not a drama. (I was crossing my fingers for “Body and Soul” but, alas, no dice.) Then again, that may have robbed us of those harrowing moments when Day bores into Holiday’s pain and vulnerability, which are every bit as moving and memorable as when she takes the stage at Cafe Society.

In The Devil Finds Work, a book-length rumination on a lifetime watching movies, James Baldwin wrote that Lady Sings the Blues, the 1972 Holiday biopic starring Diana Ross, was “related to the Black American experience in about the same way, and to the same extent, that Princess Grace Kelly is related to the Irish potato famine: by courtesy.”

If anything, Daniels errs in the opposite direction. By focusing so much on the feds and the heroin, it feels like the equivalent of making a Grace Kelly biopic and focusing entirely on cars and speed limits.

Fortunately, he has his lead actor, and her full-bodied yet delicate performance that never lets you forget where the soul of the film lies, even when her director’s agenda is elsewhere.

For that, we thank you, Lady Day—both of you.

The United States vs. Billie Holiday streams on Hulu February 26. 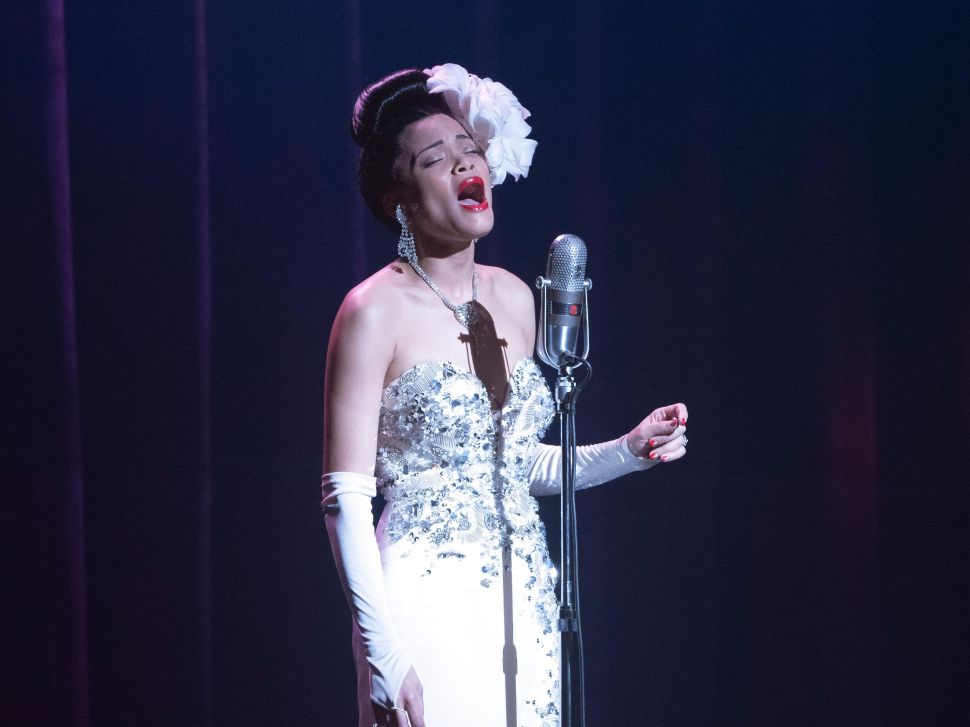