At the 2020 Consumer Electronics Show (CES) in Las Vegas, Japanese company Pocketalk showcased a phone-sized device that can automatically translate voice, text and even images between 80 different languages, all at the touch of a button. It was seen as a perfect pocket gadget for world travelers, businesspeople and students, and the company was in full gear to enter the U.S. market.

“We were standing at our booth, really excited to be part of the travel industry,” Joe Miller, Pocketalk’s general manager of Americas, told Observer in an interview last week. “Our story was very much around a wonderful piece of innovation that was all the rage in Japan and was now coming to the U.S.”

But the travel boom Miller anticipated never arrived. Two weeks after CES, the first case of a mysterious coronavirus, which later became known as COVID-19, was reported out of Japan. A few days later, on February 3, a Diamond Princess cruise ship with 3,711 passengers and crew members on board was ordered to quarantine at Yokohama Port in Japan after an 80-year-old passenger who’d disembarked in Hong Kong eight days earlier had tested positive for COVID-19.

“We received a call from the Japanese government asking for help because there were 35, 40 different languages speaking on that cruise,” said Pocketalk founder and CEO Noriyuki Matsuda.

On February 13, Pocketalk donated 13 voice translators to health care workers on the stranded Diamond Princess. In the following weeks, the company donated over 1,000 units to hospitals and emergency rooms in Japan as the coronavirus took over the Asian country by surprise.

By mid-March, the viral outbreak had hit the U.S. On March 19, Pocketalk’s U.S. office in Palo Alto, Calif. received a message from local authorities about a two-week shelter-in-place order. “We thought, okay, this thing will be over in two weeks,” Miller recalled. “But it was clear by late March and early April that this was going to be a long-term event.”

Quick to respond to the unusual situation like in Japan, Pocketalk donated 600 devices to medical facilities and testing sites in the U.S. to help combat language barriers between patients and first responders.

“We received a lot of thank-you notes on Instagram from doctors, police and first responders,” Miller said. “As time went on, we begin to see teachers use it as well.”

“And they are coming from places that you would not necessarily imagine,” he added. “It’s not New York or San Francisco or Los Angeles; they came from Wenatchee, Washington, Skagit Valley (Washington), Ohio and Illinois. We began to realize that there’s really deep ethnic populations in the U.S. who are in need.”

Miller estimates that several thousand Pocketalk translators are currently being used in the U.S. Globally, the company has sold over 800,000 units since the product debuted in 2018.

Pocketalk executives avoid talking in-depth about how the pandemic has affected the company’s sales forecast and financial planning. CEO Matsuda said its core value proposition on facilitating communication has stayed the same. “It’s just that our customer base has become a lot more diversified,” he said.

Translation: Pocketalk doesn’t expect normal travel to return anytime soon, so it is anchoring its next-generation product very much around post-pandemic life needs.

At this year’s virtual CES, Pocketalk unveiled Pocketalk Plus, a bigger version of last year’s device. It has longer battery life to support extended use in medical or educational settings. The 85 percent larger screen is specifically designed to be seen at six feet. It also has a back camera that can instantly recognize and translate written information—a potentially handy feature for the disabled. On the software side, Matsuda said the company is working on subtitle features to facilitate multilingual video calls such as Zoom meetings. 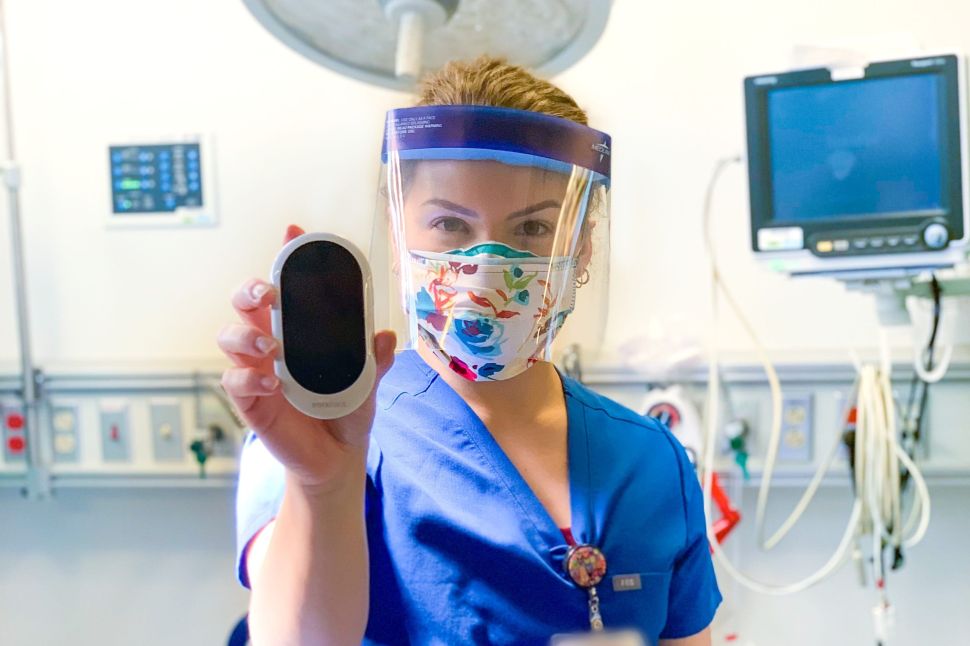