The first time Viggo Mortensen planned to direct a script he’d written was 25 years ago. The screenplay, a silent film set in Scandinavia, failed to get off the ground and the actor continued writing movies behind the scenes while starring in everything from Lord of the Rings to The Road to Green Book. In 2015, shortly after the death of his mother, who suffered from dementia, Mortensen began writing a new screenplay — one that would eventually become his directorial debut, Falling.

“I was just trying to remember things about her and I started writing a story about some things I remembered, mostly feelings rather than facts,” the actor tells Observer. “And it just became a fictional story. Falling was the first time I was able to find the financing and shoot [a film I’d written]. It took me a few tries, about four years, before we did actually find just enough money to make it.”

The film stars Mortensen as John, a middle-aged gay man living with his husband and adopted daughter, who is forced to confront his past when his conservative father Willis (Lance Henriksen) begins to show signs of dementia. It’s not an autobiographical piece, although Mortensen did bring aspects of his own life and experiences into the script. Willis is a confrontational, abrasive character, often uncomfortably so, and Mortensen wanted to explore the tension in a parent-child relationship, as well as how we can often struggle to communicate with those who don’t share our personal views.

“I’m not so big on messages. I wanted to pose questions rather than give answers.”

“I’m not so big on messages,” Mortensen says. “And I’m not at all interested in giving answers to people or telling them what to think or feel. But I did want to explore some things. I wanted to pose questions rather than give answers. I wanted to ask myself, among other things, ‘Are there limits to communication? Are there people you can’t communicate with or who don’t deserve to be communicated with?’”

He adds, “I personally think you can always make an effort and that’s worthwhile. I find now that it’s more timely than ever, that question about communication. Because communication in our society and amongst families is at an all-time low. The absence of communication is another pandemic, just as serious as COVID, and it’s probably going to last even longer and you’re not going to cure it with a vaccine. You’re going to cure it by making a conscious effort to listen. Not listen to respond or attack, but listen to understand people who don’t agree with you about anything, or maybe don’t even want to talk to you. It takes a lot more effort to try to understand a person than it does to condemn and dismiss them. I think it’s a timely story in that way.”

As he was writing the script, Mortensen began to veer further and further into fiction. His lead character, John, is a gay man and the actor added that aspect into the story only because it felt natural to what he was trying to say. In the end, it brings a new sense of tension into the father-son relationship and raises questions about how we define masculinity.

“As soon as I started writing it that way, I liked it,” he explains. “It added another layer of conflict and misunderstanding between the father and son. Another reason why the son did not turn out to be the man the father thought he was going to be when his son was a kid. I wanted it to be as ordinary as possible. I wanted it to be completely believable. It doesn’t have to be remarkable. There are lots and lots different kinds of relationships, and lots of good, working family models that are not the typical nuclear heterosexual model.”

Originally, Mortensen didn’t intend to play John in the film, which he also scored. But he quickly realized that attaching his name to the movie was a good way to ensure funding. Plus, he liked the idea of working with Henriksen again, whom he acted alongside in 2008’s Appaloosa.

“We were very short on money to shoot, edit and make this movie,” Mortensen explains. “As a producer, I could — and did — decide that the actor with some name value playing John would not have to be paid. And neither would the screenwriter or the composer or the director. That money could go into shooting the movie. But I would have never played if I thought I was in any way not right for it. The casting of this movie was, to me, crucial. I worked really hard on that. For this particular story, this was the ideal cast.”

That cast includes David Cronenberg, who directed Mortensen in Eastern Promises, A History of Violence and A Dangerous Method. The pair have recently confirmed plans to work together again and Mortensen liked the idea of taking advantage of Cronenberg’s acting abilities for a scene where Willis visits a doctor, played by Cronenberg.

“He’s great in the movie,” Mortensen says. “It wasn’t some inside joke or a gimmick. I really thought, having seen some of his acting already, Well, he’s perfect. He’s a great counterpart to Lance in that scene. I think their energy is interesting and they work well. I sent the script to David and said, ‘I’m not asking for a favor. It’s not some inside joke. I think you’d be great. If you don’t want to do it I can find someone else, but you’re my number one choice.’ And fortunately he liked it and he had time to do it and wanted to do it.”

Mortensen is aware that directing a movie as an established actor can also seem like a gimmick. He admits that many actor-directed films are “bad movies,” but he felt ready to get behind the camera after years of preparation.

“Just because you’re an actor doesn’t mean that you’re going to be good at being a director, or that you’re even going to be good at directing actors,” he explains. “It depends on what kind of actor you are and what kind of curiosity you’ve shown towards what other actors do and what everybody else does on a set to take that story from the page to the screen. If you’re curious, as I have been, you have maybe an advantage because I have some technical understanding.”

Mortensen has continued writing screenplays during the pandemic, one of which he hopes to direct next year. While Falling is not exactly about his mother, all of his work pays tribute to the woman who raised him and gave him his love for cinema.

“My mother got me into that very young,” Mortensen says. “The first time she took me to see a movie, just the two of us, I was 3-years-old. The first movie I remember seeing from start to finish was when I was 4-years-old with my mother and that was Lawrence of Arabia. We saw so many movies during my childhood and my adolescence. And then as an adult, when I would go to visit her, we’d go to the movies.”

She also made analysis and appreciation a part of that shared love. “Always, from the beginning to end of our movie-going history together, we talked about story as if it was two screenwriters talking about it. What was in the movie, what wasn’t in the movie, what was said, what wasn’t said,” he says. “I suppose that’s why I became an actor, because I wanted to become part of telling movie stories. And later a producer and now finally a director, where I was responsible for the end result of that story.”

Falling is in theaters and on demand today. 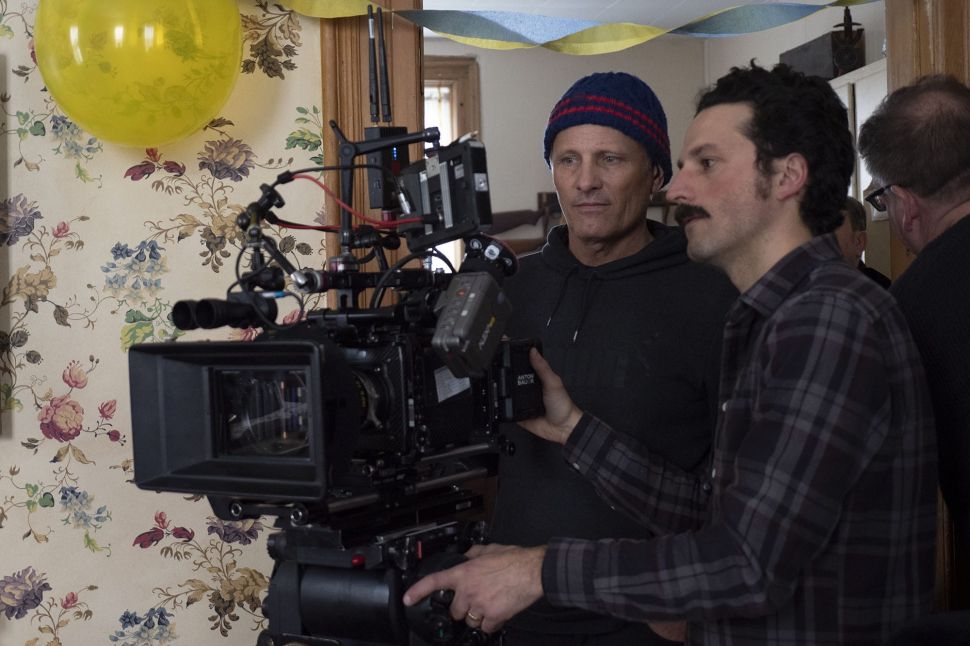