In classic sitcom fashion, Marvel’s WandaVision treats audiences to a familiar holiday special episode in “All-New Halloween Spooktacular” on its show within a show. But unlike its 1990s Malcolm in the Middle inspiration, this week’s installment leaves you feeling unsettled and anxious for the future of Westview and beyond.

The fictional show within WandaVision‘s alternate reality goes full seasonal special complete with an expanded cameo-of-the-week for last episode’s bombshell reveal: Pietro Maximoff, now played by Evan Peters of Fox’s X-Men fame. But before mutants officially start running amok in the Marvel Cinematic Universe, Wanda must confront her own reality while Vision attempts to escape his.

At the same time, our real-world protagonists Monica, Jimmy and Darcy are butting heads with Douchey Suit Guy AKA acting SWORD director Tyler Hayward, who is intent on treating Wanda as a terrorist threat. Despite our expectation that this sixth episode would be an explosive one following’s the show’s emphasis on the number “six,” “All-New Halloween Spooktacular” leans more into the humor and hi-jinx of its sitcom inspiration while positioning the plot for its final course.

The first mountain to climb this week is Pietro, who is inexplicably back from the dead and also a completely different person. Here, with a touch of Full House‘s Uncle Jesse, he’s playing the rambunctious man-child uncle who eats candy and plays video games with his nephews Billy and Tommy Maximoff, who have started to manifest powers of their own. But this Pietro is the most self-aware character in all of Westview, directly pointing out to Wanda that he’s simply playing the sitcom role of disruptive brother that is expected of him. Cheeky little speedster.

Pietro understands that Westview is Wanda’s creation; he even marvels (lame pun intended) at his sister’s newfound abilities. Interestingly, though, Peters’ Quicksilver retains memories of his death in Age of Ultron, where he was played by Aaron Taylor-Johnson).There’s even a harrowing quick-cut of his bullet-riddled corpse sitting next to Wanda, similar to how our heroine hallucinated dead Vision a few weeks back. This seems to suggest that he is still, in some way, the MCU version of the character originally cast as another actor.

“If I found Shangri-La, I wouldn’t want to be reminded of the past,” he tells Wanda when she asks why he looks different. And when Billy warns his mother of the danger Vision is in, Pietro casually tosses it aside. “Hey, don’t sweat it, Sis…not like your dead husband can die twice.” Curious and curiouser. (Gotta love that Kick-Ass reference, though. Both Taylor-Johnson and Peters starred in that one.)

While Wanda probes the truth of Pietro, Vision strikes out on his own after a subtly tense exchange with his wife earlier in the morning. The perfect marriage this is not. Going out to the edge of Westview’s simulated hexagonal borders, he discovers husks of citizens, empty shells either repeating menial tasks or frozen still. It’s a deeply unsettling picture and a wake-up call to the true cost of Wanda’s artificial Happy Ending. Real people are being hurt.

Vision comes across Agnes sitting in her car at the edge of town. He brings her true subconscious to the surface and Agnes recognizes Vision as an Avenger. She asks if she’s dead because, to Vision’s surprise, she knows he is. Red Flag No. 2,367.

From the jump, we’ve argued that Agnes is likely comic book character Agatha Harkness, who has abilities and knowledge all her own, and is more connected to the strange goings on of Westview than she lets on. Is this exchange a carefully manufactured red herring or is Agnes truly a prisoner like everyone else? Regardless, Vision has finally had enough and attempts to go beyond the Hex’s border. It, uhh, doesn’t go well.

It turns out that acting Director Hayward—who is blatantly evil in this episode—has somehow been tracking Vision through Westview. For what reason we don’t know but it’s clear that he’s up to something. Monica’s trip through the Hex has altered her molecules, watering the seeds of her future superpowers that earlier episodes planted. But when Vision exits the Hex, he begins to rapidly deteriorate (he is dead in the real world, after all). So Wanda freezes Westview and uses her powers to expand its borders. Not really helping your case in the eyes of the real world, Wanda.

Every SWORD agent, including Darcy Lewis, becomes a players in a carnival as Westview swallows up miles and miles of new ground, instantly transforming it to fit the existing production design. This sitcom has suddenly been given a heftier budget for its final episodes. Monica and Jimmy Woo manage to escape, as does Hayward. We presume Monica and Jimmy are off to meet the anonymous aerospace engineer mentioned earlier this season to help smuggle them into Westview. Is it Rhodey? Reed Richards? An unknown character? Hopefully, we’ll find out next week.

Even with a comparatively less explosive episode, this week’s entry managed to stoke our curiosity with the continued mystery surrounding Agnes and Pietro and the twins developing powers. With three episodes left, expect WandaVision‘s Endgame (lame pun intended, again) to come into clear focus. 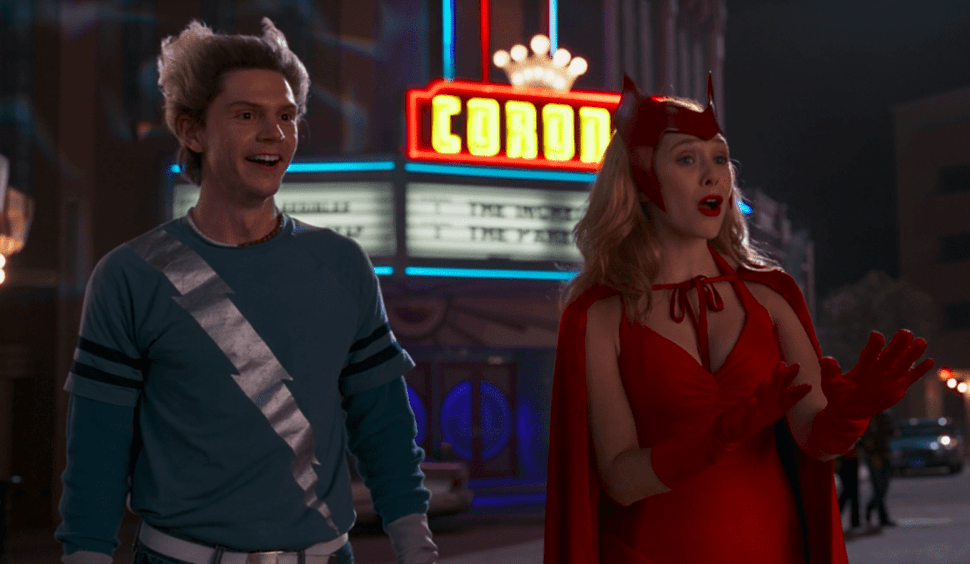