On Tuesday, the United Arab Emirates’ Mars probe, Hope, will arrive at its destination, making it the first of three new Mars visitors to reach the Red Planet this month.

The Hope probe is expected to start firing thrusters to slow itself down as it approaches Mars’ orbit at 10:31 a.m. Eastern Time (7:31 p.m. in the UAE). Controllers at the mission operations center in Dubai will receive signals from the spacecraft 11 minutes later to confirm whether everything has gone according to the plan. Orbit entry instructions have all been programmed into Hope’s computer. Since it takes 11 minutes for radio signals to travel between Earth and Mars, there isn’t much ground control can do if anything goes wrong during the mission.

You can watch the livestream of the event beginning 10:30 a.m. Eastern Time on the UAE Space Agency’s website or the link embedded below.

Hope’s thrusters will shut off 27 minutes after deceleration begins. Five minutes after that, the spacecraft is expected to pass behind Mars and be out of contact for 15 minutes. When it re-emerges, controllers will be able to confirm whether the orbit entry is successful.

Over the weekend, several landmark buildings in Dubai, including the world’s tallest building, Burj Khalifa, were lit up in red in honor of the Middle Eastern country’s first-ever Mars mission.

Burj Khalifa lights up in red, in preparation for the arrival of the Hope Probe to the Red Planet..

The Hope probe was launched into space on July 19 atop a Japanese rocket (H-IIA) from Japan’s Tanegashima Space Center. The probe is designed to study the Red Planet from its orbit for at least one Mars year, roughly equivalent to two Earth years.

On Wednesday, China’s Tianwen-1 Mars probe, which includes an orbiter and a lander/rover duo, will also arrive at orbit. Tianwen-1 is China’s first fully homegrown interplanetary exploration effort. It’s also the first attempt by any country to achieve orbiting, landing and roving all in one go. But unlike NASA’s new Mars rover, Perseverance, which will attempt landing as soon as it arrives, Tianwen-1’s orbiter will study Mars surface for several months to identify a potential landing spot for the rover. The landing site is expected to be somewhere in an impact basin called Utopia Planitia, located near NASA’s Viking 2 landing site. 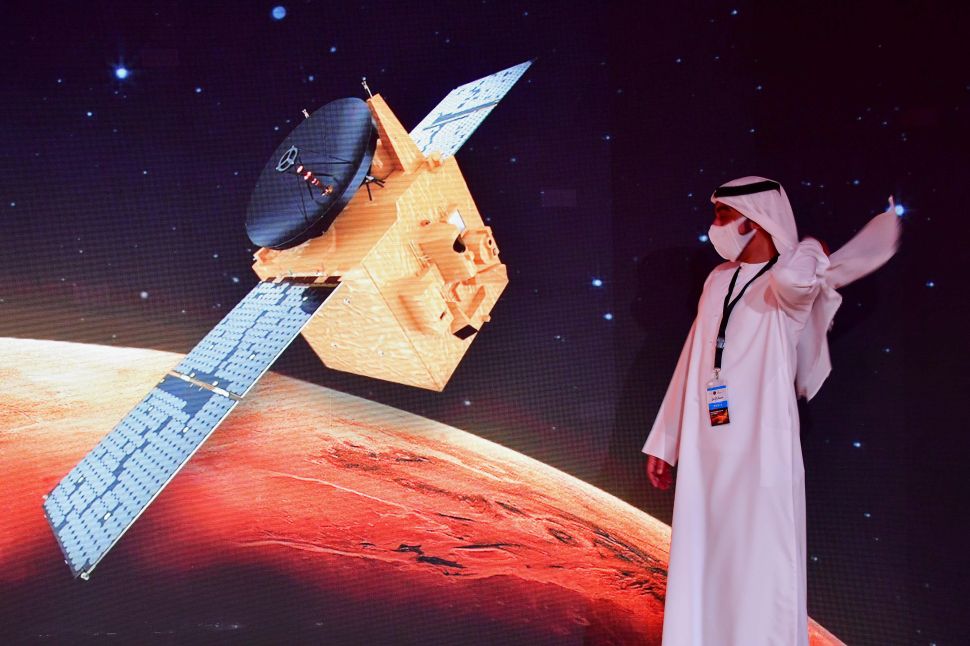