If Thomas Cole’s painting The View from Mount Holyoke (1836), with its survey of a land divided between untamed sublimity and encroaching settlement, encapsulated the grand romanticism of the ascendant Hudson River School— widely considered to be the first coherent artistic movement to emerge in the U.S.— the work also carried within it a host of elisions and omissions that would come to define much of the American landscape painting to follow. The plein-air reveries of Cole and his disciples distinctly omitted Native presence from most works, portraying the land as an untouched paradise and, in doing so, painted American expansionism as a noble push into the sublime rather than an invasion. Like much art before it, American landscape painting ended up an engine of colonialism, serving to reinforce the will of white capitalist hegemony as it clawed its way westward, providing ready-made founding myths of heroism and untouched beauty.

This context is useful in viewing the paintings of Alexander Richard Wilson, whose debut solo show, “burning butte,” is on view at Housing Gallery until March 21st. The works on display represent a politically cogent reimagination of the American landscape painting, one that speaks to the inherent connection between racist and ecological violence. Richard Wilson painted these works in the summer of 2020 after moving from Chicago to Denver amidst the continuing protests against a still-violent white hegemony. In Denver, he found a different sort of devastation: the Rocky Mountains, consumed by forest fires. “I was transfixed by the derogatory way the landscape is framed, treated, and attacked in the United States, much like the black body in space,” Richard Wilson writes in an accompanying statement. “The landscape burned and we were inundated.”

“Inundation” is an apt word for the experience of “burning butte”. The paintings in the frontmost gallery immediately confront the viewer with Richard Wilson’s thickly-impastoed brushwork, his wide, looping line work hanging over angular mountainscapes or coursing through their valleys. Some paintings, like The East Troublesome Fire, Smoke, just barely register as landscapes at all, its planes of grey and red teetering between abstraction and representation, only the jagged outline of its mountains providing a sense of field. A current of red runs through many of the works in this first room— Loss of Fire Containment and Barn Fire, a pair of painted photo transparencies, feature both looping crimson cloud shapes and angular red lines that trace ghosts of landscapes past, photo-negative picket fences and the transparent skeletons of trees. Elsewhere, as in the pair of paintings named after The East Troublesome Fire, red runs amok through wintry vales, or encircles the edge of a painting, framing it in bright scarlet. Connotations abound: fire, obviously, and blood, but also redlining, the violence of withholding habitation, how ecological disaster will only result in more people without homes.

The works in this initial gallery feel like repudiations— of the U.S., of its landscape tradition, and of a romance about the state of its environment. The paintings here are miles away from the airy pastoralism and wide-open expanses of Cole and the Hudson River School, and their moral is just as far removed: the land is not open to us, it is dying by our hand. Violence runs slipshod over the surface of the land in these works, which boil with unnatural red, turning our precious tradition of scenic vistas into jagged abstract planes. They are not altogether pleasant to behold, which is perhaps the point.

It’s the gallery’s back vestibule, however, that feels like the show’s linchpin. In this smaller gallery, behind a veil of red, are two paintings that connect the initial gallery’s focus on ecological violence to a more specific, granular bodily harm that the country inflicts upon its people every day.

The viewer is first accosted by a vision of two disembodied arms floating in a cream-colored room, connected through a divine touch of fingers. One arm is violently torn, its ragged edge open to the viewer to reveal viscera, a core of bone. The painting is titled Alexander’s Arm by the Door, in reference to the artist himself. The painting’s only neighbor in the room is a wintry landscape titled Clear Creek and the head of Alexander, Golden, a geometric puzzle of a scene focusing on a frozen river and what appears to be smoke winding through a dead forest, while at its center, laying on a pedestal and trickling blood, is a decapitated head— the artist’s own, it would seem, a literalization of the violence that soaks Richard Wilson’s landscapes. The titles of these paintings, along with their clear central figuration, lend them a moral weight: this is the artist’s head, his arms and hands— the tools he used to make this show— and here they are dismembered, disembodied figures adrift in a field. In this back room, the Black body and the landscape become analogues, the broad-level harm against one echoed in the specific harm against the other, the two fellow victims of a hegemonic impulse that continues to rumble beneath and across the country at large.

The show’s success, ultimately, comes as a form of record-keeping, ensuring that representations of the American landscape do not fall into scenic fantasies or sins of omitted violence. There can be no romanticism about the state of the country or its wide-open vistas, the works seem to posit, only clear-eyed reckoning. 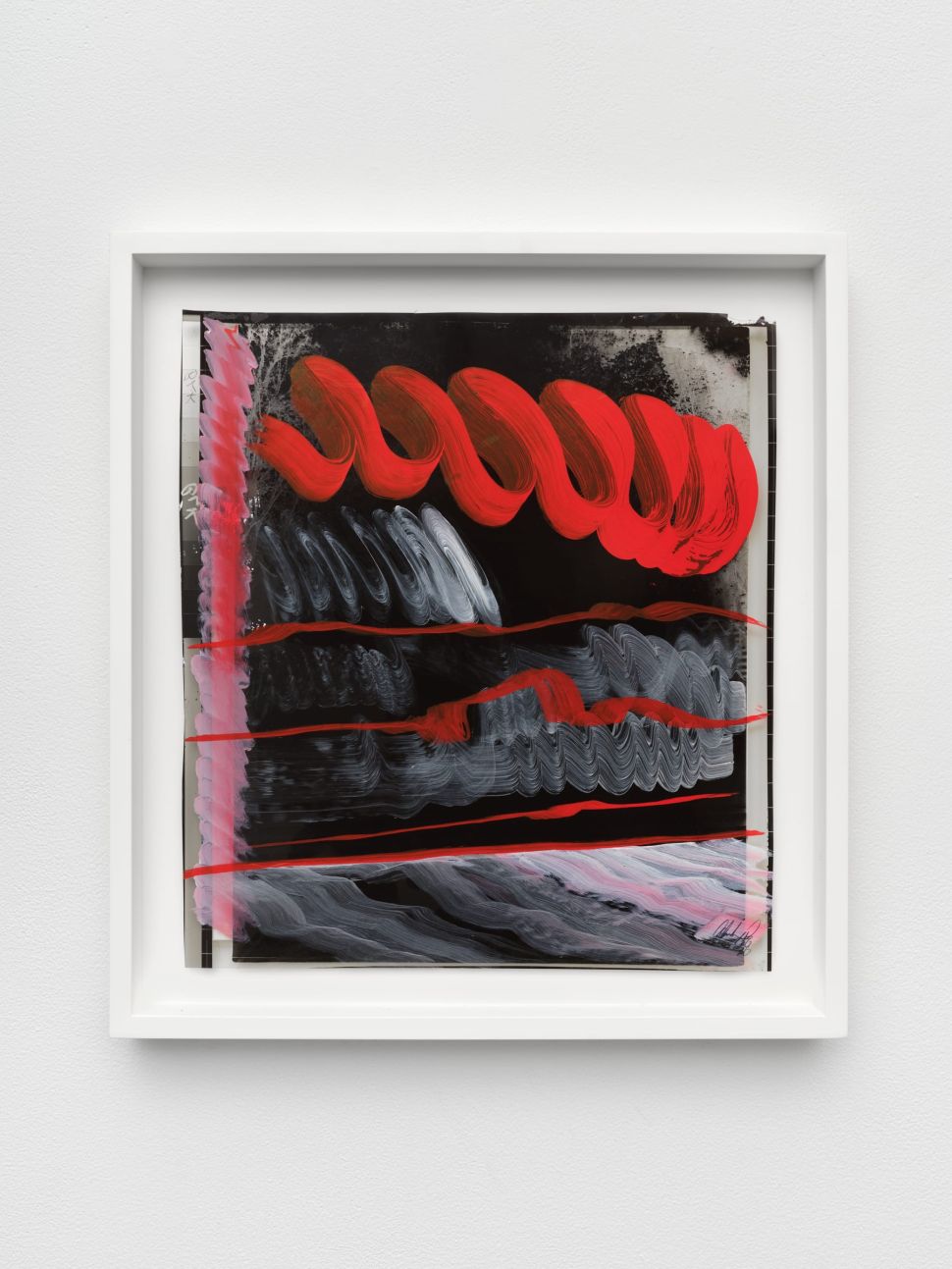