Amaryllis DeJesus Moleski’s The Trouble With Us (tropical storm) centers several Black and brown femme figures, lying down with their mouths agape— their eyes shoot upwards, as if is pulled by an attraction beyond the paper’s rectangular confines. On her arm sits a smaller brown femme figure with a javelin in her lap, and on her armpit, a duplicated one throws a javelin in motion, as she tries to kill the ghost that haunts her. Her legs are entangled with another figure of similar shape and stature, lying directly across from her. A multiplicity of colorful ears, eyes, ghosts, and bones are playfully stamped throughout and amongst the hues of purples, blues, pinks, and whites are shimmering rainbows — giving the collage a holographic effect. These juxtapositions — femme figures laying atop one another in a fantastical galaxy, symbols that exist at the intersection of life and death, colors that remind you of fruit-flavored candy — all contribute to the 35-year-old interdisciplinary artist’s vision of using art to portray what she perceives as in-betweeness.

And what does Moleski mean by in-betweenness, exactly? It’s a question that the recent Yale M.F.A. grad herself even struggles to answer. But that’s the point — and is why Moleski uses what she calls “graphic language” to express gray areas that are otherwise inexplicable. Much like The Trouble With Us (tropical storm), her drawing The One Time I Dreamed It, It Came True places three humanistic, femme bodies in a cosmic and fantasy world — but this time, they are swallowed by potent shades of bright blue. A solid, femme figure grounds the middle of the page and is surrounded on both sides by two, more transparent duplicates. The repetitive figures are meant to emulate detachment from one’s physical self — referencing a phenomenon that occurs when engaging in activities such as lucid dreaming. By integrating fantasy and reality, Moleski does not intend to highlight the oppositional nature of the two spatial concepts, but rather aims to question their intersectionality. “Just because something is a fantasy, doesn’t mean it’s not real and doesn’t have teeth in this world,” Moleski says to Observer. “I mean, money is a fantasy, but it influences absolutely every aspect of our living, waking, and sleeping lives. So does race. Fantasy and reality — the two are intrinsically intertwined with each other.”

Moleski’s confrontation with existential questions are intentional, and perhaps most apparent through recognizable symbols that repeatedly come up in her work — ears, bones, ghosts, and roses are just a few that she uses to explore themes of regeneration and spiritual hauntings in the body. However, nothing about Moleski’s work is linear — not even the process of understanding the stories behind the symbols she becomes obsessed with using. “I don’t just decide what a symbol means and then replicate it multiple times,” Moleski says. “I’ll make it, then I’ll sit with it, and through the process of just being alive in the world, it begins to make sense.”

However, a symbol that Moleski has recently been particularly drawn to is the rainbow, as she believes it represents a ghost the body is haunted by. The element is also rooted in her identity as a queer, Puerto Rican femme — a description she jokes is akin to “being like an awkward mixed kid from the House of Ravenclaw.” Moleski says that she thinks about Puerto Rican-ness as being in a psychic state of battling and becoming the rainbow — which, like her intersectional identity, exists at neither end of any spectrum.

“We’re [Puerto Ricans] called ‘The Rainbow Island’ or ‘The Rainbow People’ — and mostly it feels like a way to erase and bury the legacy of slavery, colonialism, genocide, forced miscegenation, colorism, economies of sexual violence and erasure that we carry in our DNA,” Moleski says. “The rainbow is a symbol of pride, and we are asked to perform that a lot, even when our mouths are full of blood.”

But even when Moleski isn’t using colorful rainbow stamps, the rest of her bright and bubbly color palette seeks to ask the same questions the spectrums of color do, as well as attempts to shift the historical narratives of what we often hold to be ultimate truths. The Guardians pops with bright pinks and deep blues, while The Taker Takes, the Flamer Flames is grounded by a magnetic yellow as warm as the sun. “A lot of my color choices have to do with queerness and femme subjectivity,” Moleski says. “Intelligence is often perceived as more tech, masculine, white, and cis-gender — all of these things are ways that we are expected to experience reality. Color is a way for me to apply cultural signifiers of femme, foolish, too much, flamboyant, disposable, and cute to narratives of larger, existential questions.”

These colors are represented not only on paper, but also projected through light refractions in Moleski’s physical installations. In Moleski’s What Big Homie Said to Little Homie (Haunted Bridge) installation, she hangs up her drawing What Big Homie Said to Little Homie and projects a rainbow onto its surface. On an adjacent wall, light is rendered onto a bridge-like structure, creating shadows and patterns that are reflected throughout the installation space. “I think about drawings as a language, composed of symbols and characters,” Moleski says. “I aspire for the drawings to be read like vocabulary, and I intend for the installations to feel like the experience of language as meaning.”

Whether its physical installations, interdisciplinary pieces, or collaging, Moleski doesn’t aim to use her art to answer questions, but rather just sit with them. “Is it even possible to describe in-betweeness and the multiplicity of all these things at once?” Moleski asks. “I don’t know. But at least it’s a question that I’m obsessed enough with to keep doing it and to keep trying.” 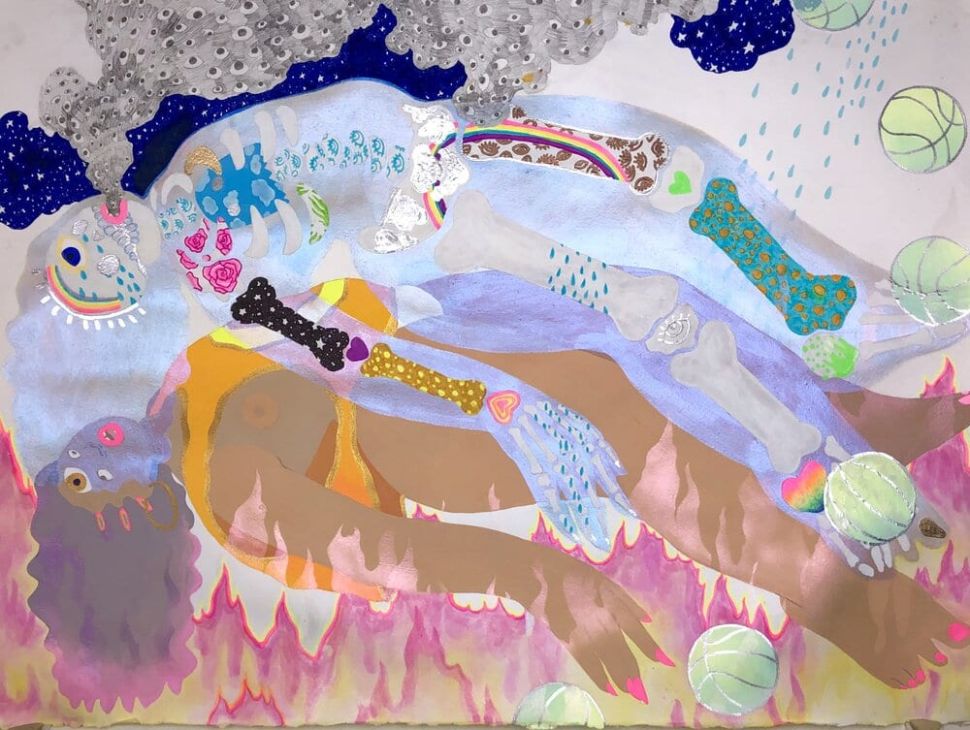