Imagine all the Brooklyn white boys and Patti Smith are gripping the new Roberto Bolaño outside the bookstore. Some are taking off their masks to smoke cigarettes, some are eagerly chatting up a girl dressed in all black who chose the wrong day to accompany her boyfriend out in public. These men have asked you to give Hemingway or Bukowski one more try, please. They have a coffee-stained copy of Infinite Jest. Maybe they enjoy Vonnegut and Murakami. They ask if you’ve read the newest one. No, not that one. Many of these authors may be very good, but you’d never know it from their veneer of coolness extolled by men. These white male hipsters offer a ‘softer’ misogyny. They’ll talk over you as you mention the women you’re reading and they certainly believe women are props, not characters.

Bolaño has become one of those authors men use as a signifier for literary intelligence. Like Vonnegut and Murakami, he offers that another world is just out there. A final frontier, a mystery of human existence solved by sleuthing. Bolaño concocts a mix of conspiracies and fictional literary movements mixed in with the tapestry of encroaching fascism. This is perhaps why the archives have decided now is a perfect time to publish some lost Bolaño novellas.

2666 is considered Bolaño’s masterpiece. It’s a brick of a novel. Lugging it around on the subway is not easy. Each section follows a different character in a kaleidoscopic manner chronicling abuses of the government, sexism, even homophobia. It’s a violent, curious labyrinth of a novel. Many of Bolaño’s novels overlap, featuring similar or the same narrators, often in the form of Bolaño’s alter ego Arturo Belano, who is himself a poet. Bolaño was a poet who grew up in Chile, moved to Mexico, moved back to Chile and was detained under the Pinochet regime, before eventually settling in Spain. After having a family and turning forty, he turned from poetry to fiction in order to make more money to support his family. Belano follows a similar path, blurring ideas of political engagement, autofiction, and biography into a mythic Bolañoverse. A world where revolutionaries are disguised as “prophets, seers, sages, sorcerers, necromancers, mediums.” And of course, as poets.

These novels often have the feeling of a giant unending book project. More and more fragments leading to fake hallways and dark cities. The answer is out there somewhere. Maybe in an alley, maybe in the glimmering lights of Santiago, in that empty ringing phone booth. Bolaño is a master of writing these kinds of portals, worlds within worlds. His metafictional texts are similar in this way to Vonnegut, Murakami, or Borges, but Bolaño’s work has a decidedly political bend. Many of his characters are poets or lost writers facing the consequences of their own or their writing group’s political choices. They move from Mexico to Chile and back, participate in anti-fascist literary movements, give up writing altogether, and try to raise arms against fascists and Nazis. This concept of citizenship, migration, and politics is at work in many of Bolaño’s stories. These are books about something, even if the atmosphere and plot are hazy. At times Bolaño writes about otherness in order to build this mood. Hovering in the background are queer people, Black people, and sex workers. These characters seem to be sprinkled in to display their fate amid fascist hellscapes. In Distant Star, Bolaño has an extended story-within-a-story about a gay poet with no arms. In Amulet, our narrator is the mother of Mexican poetry who discusses her place in patriarchy in opaque ways.

Fascism’s encroachment on daily life is a large part of the three ‘novellas’ compiled in this new posthumous collection hauntingly titled Cowboy Graves, translated by Natasha Wimmer. The works are, as many Bolaño pieces are, fragmentary. The first, and longest, is the title story following Arturo Belano as he winds his way from Chile to Mexico and back again to take arms against the government. He jokes about cowboys and death with his father, meets a man known as “The Grub” who carries a gun, writes a short story, and tries to join the revolution. The second, and most coherent, is about a man in French Guinea who after an eclipse receives a phone call from a political literary movement asking him to join them in Paris. The third and most fragmentary is a collection of twenty-something pieces revolving around numerous concepts and ideologies more than narratives: writers talking about Neruda and Whitman, Arturo Belano falling in love, descriptions of torture, a dying man’s last wish for .

Yet despite the twilight horror, Bolaño writes beautifully. His maze is full of terror and fear, focusing on the experience of young men and their driving anger. If Murakami is seeking a cure to the loneliness of globalization, Bolaño is more worried about the violence of globalization. Often his characters witness tremendous trauma inflicted by the Pinochet regime’s coup. His characters continually reckon with the use of poetry in a war-torn world.

Bolaño constantly builds a web of fragments for readers to collect and relish. In Distant Star, Arturo Belano goes on an obsessive hunt for a certain VHS. This fetishization seems fitting to the commodification of Bolaño. The back of Cowboy Graves features detailed descriptions of Word doc files and hard drives. Bolaño published a handful of books during his life-time, but since his death in 2003 at least six posthumous collections have come out.

In her essay “Last Words,” Joan Didion wrote about the release of Hemingway’s posthumous books. Didion questioned if a reader could even call such things ‘books.’ Who knows what the author intended or believed was finished? Bolaño’s scattered, winding style is quite different from Hemingway and does feel like he is always rewriting and adding to his body of work, yet one wonders if this is becoming the expanded Bolaño universe. Each piece further down the rabbit hole hoping for an answer or new character to tell us the meaning of life. Like Bolaño’s own stories-within-stories, the endless book projects toted out by his publishers lead us further into a video store with a basement and a secret tunnel leading us through the sewers to a secret library.

Ultimately, the appeal of Roberto Bolaño now may be his understanding of the quotidian alongside the oppressive. Similar to how Phoebe Bridgers has described her music as having a crush and working through trauma during the apocalypse, Bolaño’s characters keep going. They write their stories, ride steamboats, watch eclipses and Bergman films, and contemplate armed resistance. “The rest of the afternoon proceeded as usual: somebody wrote a sonnet to the eclipse; somebody compared the eclipse to the state of the arts in our country; somebody said that children conceived in the eclipse were born with birth defects or just flat-out evil; which meant that it wasn’t a good idea to make love during an eclipse, total or partial.” This world of collisions, mazes, hiding, and art is its own galaxy to explore. Cowboy Graves offers an intriguing and at times fragmentary detour into Bolaño’s world. 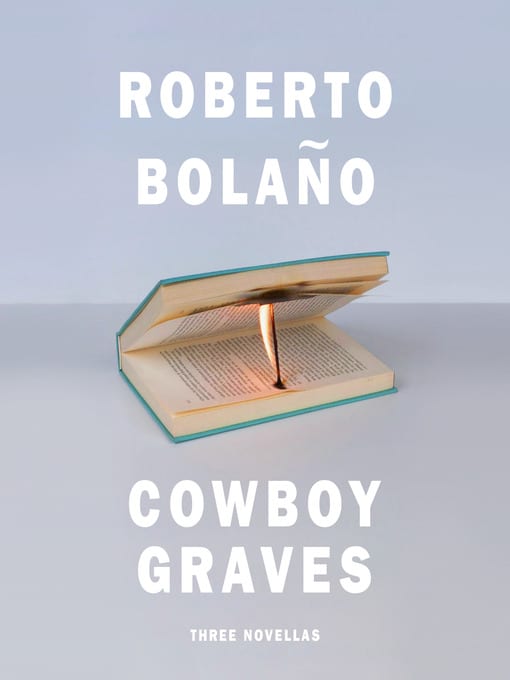