Earlier in March, it was announced that Christie’s would be auctioning off Game Changer, the painting made by the elusive street artist Banksy in order to pay homage to NHS healthcare workers in the United Kingdom. The painting, which depicts a young child ignoring his superhero toys in favor of playing with one representing a nurse, has reportedly just sold for £16.7 million (or approximately $22.9 million), which is by far the highest price Banksy has ever fetched at auction. It’s both a great victory for the mysterious artist and for healthcare workers, because the money generated by the sale will be going to UK health charities.

Previously, the highest price Banksy had generated at auction was £9.9 million, which was shelled out in 2019 for Devoted Parliament, the artist’s cheeky canvas depicting members of Britain’s parliament as chimpanzees. The higher price for the NHS-affiliated painting may have had something to do with the altruistic intent behind the sale; Banksy will donate the proceeds to “help support health organizations and charities across the UK that enhance the care and treatment provided by the NHS.” Additionally, in a statement regarding the sale of Game Changer, Christie’s said that the auction house will also “donate a significant portion of the Buyer’s Premium to these causes.”

It’s been a rough year or so for the art world, which has had to scramble to make all its auction processes work seamlessly online, but Bansky, whose aesthetic skews toward crowd-pleasingly political imagery, can essentially always be relied upon to drum up a high sticker price or a bit of controversy. Indeed, when Game Changer first appeared in Southampton General Hospital, it was almost stolen by a would-be thief brandishing a cordless drill. Fortunately, the saga of the painting appears to be ending quite well. 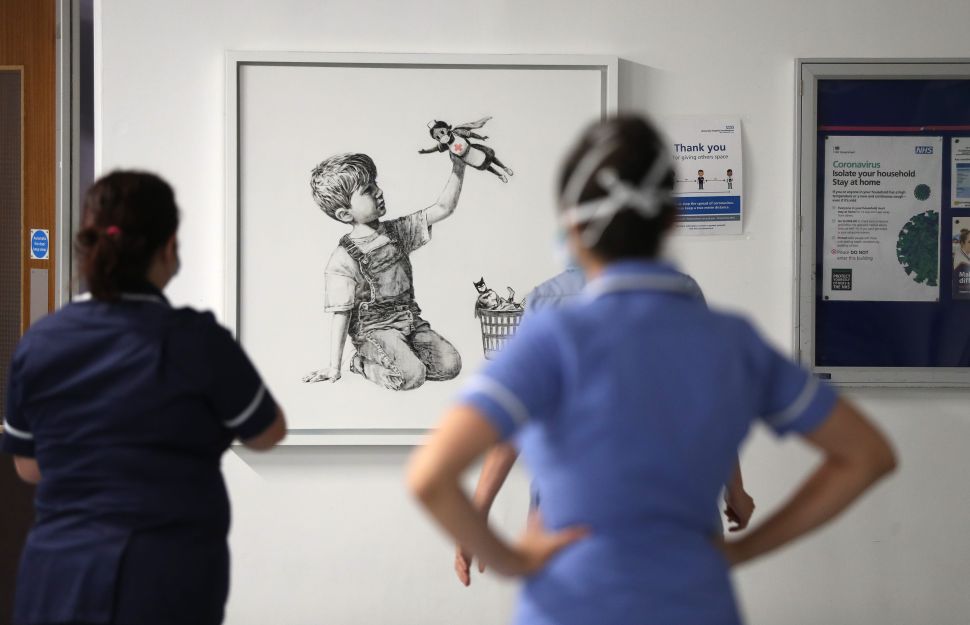