Back in May of 2020, during what was perhaps the height of fear and uncertainty regarding the coronavirus, the elusive street artist Banksy brought a bit of light to the foyer of the Southampton General Hospital in the United Kingdom, where he hung his latest painting: an ode to health care workers entitled Game Changer. In the work, a small child is shown playing with an action figure clad in a nurse’s uniform, paying homage to the fact that health care workers were viewed as heroes in the midst of a public health crisis. Now, according to new reports, Game Changer is going to be sold by Christie’s at auction to benefit the NHS.

Specifically, the painting will be offered at Christie’s 20th Century Art Evening Sale on March 23rd, and the artwork has been estimated to sell for between £2,500,000 and £3,500,000. Last year, Banksy also made sure to comment on topical issues with artwork related to the Black Lives Matter movement. “Game Changer is a universal tribute to all those fighting worldwide on the frontline of this crisis,” Katharine Arnold, the Co-Head of Post-War and Contemporary Art at Christie’s, said in a statement. “Banksy’s Game Changer was a beacon of light for the staff and patients at Southampton General Hospital and it was the artist’s wish to then auction it with proceeds benefitting the NHS. The work pays tribute to the strength and resilience of those who have demonstrated true leadership throughout the pandemic, the staff of our vital NHS, the nation’s true heroes.”

Additionally, like many other works by Banksy, Game Changer has already been the target of potential theft. Last May, a mysterious man brandishing a cordless drill was spotted hovering around the painting on hospital CCTV cameras, but security managed to intervene before the artwork could be pilfered. 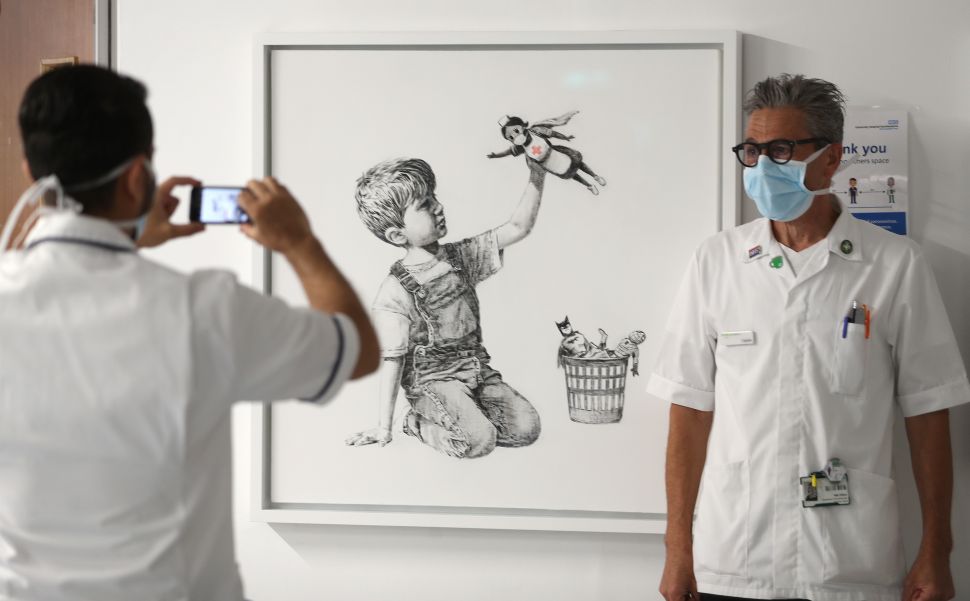