Five years ago the excessively titled Batman v Superman: Dawn of Justice lumbered onto cineplex screens for 150-odd hours of darkly lit fight scenes, ponderous blaring music, clenched jaws and Jesse Eisenberg manically chewing up as much scenery as possible. In 2016, as the Trump campaign ramped up, the movie read as a heartfelt but bumbling pro-immigrant declaration, with Henry Cavill’s Superman as the alien outsider who sacrifices himself for true American values. Nothing summed up the heartfelt bumbling more than the close-up of a battered Superman choking out a weak but impassioned, “You’re letting him kill Martha!”

As fans of the movie are aware, there’s not just one Martha in the movie, but two. With his typically dour over-carbonated fannishness, director Zack Snyder hinged his film on the fact that Superman’s mom and Batman’s mom in the comic book source material happened to have the same common and unexceptional first name. Snyder obviously seems extremely proud of himself for noticing both Martha and Martha at the same time, and he turns the coincidence into a supposedly uplifting, but actually depressing, parable about assimilation and the limits of solidarity.

Batman v Superman has, inevitably, a ton of plot. But to summarize, the evil billionaire Lex Luthor (that’s Eisenberg) has manipulated the media and the public into mistrusting Superman. Luthor convinces Batman (Ben Affleck) in particular that Superman’s enormous power and alienness makes him a threat to humanity. Batman, aka Bruce Wayne, calls Superman a “freak”, mocks his costume (derived from his ethnic Kryptonian heritage) and sneers at him for being an outsider. “You were never a god,” he spits. “You were never even a man.” Intentionally or not, Batman’s bile echoes anti-immigrant prejudices directed at so-called model minorities like Jews and Asians, who tend to be seen as both unhuman and as feminized weaklings.

Zack Snyder’s parable about acceptance and heroic courage is notably timid in most ways that matter.

Luthor allows Batman to get his hands on some kryptonite, which can weaken Superman. He then kidnaps Superman’s mother, Martha Kent, and demands that Superman kill Batman. So Batman and Superman bash each other around the screen for a while, until Batman’s kryptonite allows him to win. With his hand on Superman’s throat he prepares for the coup de grace with a kryptonite spear, but he pauses when Superman gasps, “You’re letting him kill Martha!”

Batman freezes. Then Lois Lane (Amy Adams) shows up and explains that Superman, aka Clark Kent, is talking about his mom. The film gives us some flashback images of Batman’s mother, also named Martha, being killed in an armed robbery in an alley when Bruce was a child. Chastened and suddenly recognizing his own irrational bigotry, Batman declares, “I’ll make you a promise. Martha won’t die tonight.”

The scene is intended to show Superman, or Clark’s humanity—and more, his normality. Clark Kent may have been born on Krypton, far away from the United States. But he’s not so different from hearty red-blooded American Bruce Wayne. Immigrants: they still love their moms.

The pro-immigrant message here, though, is predicated on similarity and on assimilation. If Superman’s mom was named Mxyzptlk rather than Martha, it’s likely that Bruce Wayne would not have suddenly recognized that they share a common humanity. Superman’s spaceship landed in a Kansas cornfield; he was adopted by small family farmers John and Martha Kent. While his origins are in the stars, his values and family and outlook are dead-center American heartland.

The magic word “Martha” doesn’t make Batman realize that outsiders have mothers, really. Instead, it makes him recognize that he and Superman have someone who could be the same mother. The film perhaps wants to condemn bigotry. But instead it validates it by suggesting that aliens are okay only when they’re exactly like us. Batman isn’t wrong for hating people who are different. He’s wrong for failing to realize that Superman—through heritage and choice—isn’t one of those different people.

In embracing assimilation, Snyder and Batman are arguably merely in comic book tradition. Much is made these days about Superman’s Jewish roots. Some critics have argued that Superman’s origin as an orphan has roots in the Moses story; that the destruction of the planet Krypton is based on the experience of the Holocaust; that Superman’s strength is based in Jewish Golem legends.

Scholar Martin Lund has thoroughly refuted these arguments.  Superman’s creators Jerry Siegel and Joe Shuster were not religious nor interested in Jewish lore. Their sources for Superman were pulp science-fiction and adventure narratives, not the Bible or Eastern European folklore.

If anything, Superman’s Jewishness isn’t in ethnic symbols or storylines, but in the very absence of those markers. Two Jewish kids from Cleveland imagined that Clark Kent—a nebbishy Jewish stereotype in many respects—was actually the most powerful icon of Americanness and masculine power on earth. The early stories barely mentioned Superman’s Kryptonian heritage. Instead, Superman, like many Jewish Americans, embraced New Deal progressivism, thumping corrupt mine owners and capitalists in the name of a red-blooded, multi-ethnic white working class.

Though it’s less discussed, Batman’s creators Bob Kane (born Robert Kahn) and Bill Finger (born Milton Finger) were also both Jewish. Like Superman, Batman would cast off his Jewish-stereotype-tinged foppish billionaire persona to become a virile law-and-order bruiser for justice. Batman and Superman both have moms named Martha because “Martha” is a typical, even bland, American name, with no particular ethnic connotations. It emphasizes the hero’s normality.

It’s a decidedly odd normality, though, that dresses up in colorful tights and wears bat ears. When Batman does rescue Martha Kent (Diane Lane), he tells her that he’s a friend of her son’s. “I figured,” she responds cheerfully. “The cape.” Batman and Superman aren’t just alike because they have mothers with the same unremarkable name. They’re alike because they dress in a decidedly remarkable way.

Clark Kent and Bruce Wayne aren’t Jewish in the film, of course. They aren’t immigrants and/or people of color either. The main non-Americans in the movie are portrayed as terrorists and thugs. Snyder’s parable about acceptance and heroic courage is notably timid in most ways that matter. The movie may be taking a mild stance against xenophobia. But it does it in a way that’s calculated not to draw ire from actual xenophobes. Superman flies to Mexico to save a girl from a fire. But Snyder never has him swoop down to protect an undocumented person in the US from police. No one ever actually compares the treatment of Superman to the treatment of immigrants. Clearly, Snyder and the suits at Warner Brother’s didn’t want to make the metaphor too pointed.

Still, given the character’s origins, there is some room in the movie to imagine that when Batman realizes he’s just like Superman, he’s not just seeing Superman as a fellow normal American guy. Maybe he’s also seeing himself as a fellow alien. Like American Jews who have organized to protest against ICE, solidarity can be built on marginalization rather than assimilation. Even in Batman v Superman, justice doesn’t necessarily need to be reserved for those whose mom’s are named Martha.

Batman v Superman: Dawn of Justice is available to stream on HBO Max. 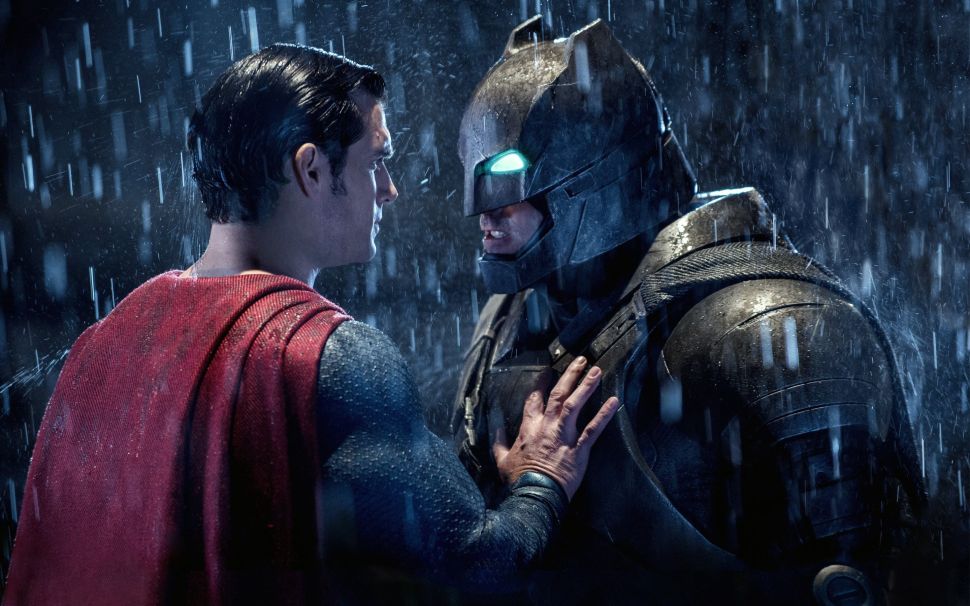