Los Angeles based artist Becky Kolsrud turns mourning into a metaphor for metamorphosis in her solo-show “Elegies”, on view until March 13th at JTT Gallery in Manhattan, New York. Conceived in the seclusion of her studio, the exhibition features twelve large-scale canvases tackling themes of mysticism, isolation, and introspection, interpreted through the context of the global pandemic. Ultimately, her work poses questions about how we can cope with grief constructively, even when communal displays of it continue to be lethal.

What does it mean to mourn in the age of COVID-19? A proper elegy would probably read hundreds of pages long. Mass death looms like an impenetrable fog, meanwhile millions face unemployment, declining mental health, and the exacerbated effects of disability or illness. Prolonged isolation from friends or family continues to leave us bereft, with nowhere to turn but our own solitude. Kolsrud explores this mutual melancholy in “Elegies” through a series of semi-abstract paintings, each of which plays with loss as a physical and psychological sensation. Her fourth solo-show with JTT, the exhibition demonstrates a maturation from fantasy to fully-realized surrealism. Sadness infuses her paintings down to Kolsrud’s primary color choice: a distinct, deep shade of blue. Her subjects are neither dead nor truly alive, obfuscated by the overpowering feeling of vacancy that lingers in every composition. Through this interplay of dream and reality, the artist’s requiem takes a visual form.

Kolsrud pulls from a wide aesthetic vocabulary to articulate her anguish. Consider her painting Inscape (Face/Figures), for example, which subverts the art-historical motif of bathers. Pioneered to naturalize the female form, previous iterations of the trope have typically reflected the male gaze. However, in Kolsrud’s disjointed version, she represents women attuned to their own tenderness. Three featureless figures wade through an opaque ocean, their bodies blurred, covered by an overlay of feminine facial features. It’s impossible to avoid locking eyes with this penetrating stare, forcing viewers to confront our innate voyeurism. As the title suggests, the painting doesn’t depict an ordinary bathing scene, but rather offers a glimpse at an “interior landscape.” Eschewing passivity, Kolsrud grants her subjects awareness, autonomy, and consequently, complete control of their grief. Implicit within the work is the idea of renewal, how it feels to finally reclaim your sense of self following a tragedy.

Multiple paintings allude to the Ancient Greek myth of Cyparissus; wherein a boy is so grief-stricken after losing his stag, he asks Apollo to transform him into a cypress tree. Immortalized through tears of sap, he laments his companion forever. Kolsrud cites this Western tradition in her work Inscape (Dryad), which shows a bushy cypress tree with two bare human legs. A hot pink sky severs the mountain landscape to signal the subject is drifting through space, consumed by woe. A similar cypress makes an appearance in Dryad (Cypress), this time standing beneath a collection of pale blue clouds. Reminiscent of Georgia O’Keeffe’s Sky Above Clouds, a series created shortly after O’Keeffe’s husband’s death, Kolsrud wields color as a method to set a somber mood. In her flat picture planes, despair isn’t just a fleeting emotion – it’s an all-encompassing, inescapable atmosphere.

Intense grief can feel like a total detachment from your body. It splits you open from the inside out, clawing at your subconscious until you’re subsumed in an abyss of nothingness. With communal rituals such as large funerals banned due to social distancing, we’ve learned to honor the dead however we can. Kolsrud captures this complexity in her installation Three Graces, comprising a canvas and an adjacent arrangement of dismembered feet. Featuring three headless figures huddled together, the painting’s subjects are naked, beautiful, and broken, echoing the delicacy of an ancient statue. The feet form a physical boundary in front of the canvas, as we’re left longing for a tangible touch, our past lives functioning like phantom limbs. Inscape (Three Graces), its companion piece, showcases what’s missing from the original installation: evocative eyes, disjointed lips, and misplaced noses. In a contemporary twist of fate, these two halves only harmonize in theory.

“Elegies” culminates with the exhibition’s centerpiece, a triptych titled The Chorus. Occupying fifteen-feet of the gallery’s largest wall, the panoramic painting portrays several cypress trees with lanky human legs, balancing on patches of land parted by a rippling sea. Different perspectives bonded in collective trauma overlook the same vanishing horizon. At the composition’s focal point, a corpse lies afloat in an open casket, uniting all in shared sorrow. An obvious comparison can be drawn between The Chorus and how helpless it feels to live through a global pandemic. To mutate permanently into a tree, enduring the organic recycling and rebirth of matter, symbolizes a cosmic connectedness. Likewise, going through the motions of grief together, virtually or distanced, has proven a tiny solace amid larger catastrophes. By cutting her subjects open, dissecting them to reveal their innermost vulnerabilities, fears, and anxieties, Kolrsud positions her paintings as blank vessels to project onto.

What renders “Elegies“ so potent is its characterization of bereavement through a broad spectrum. With a vast examination of death, the exhibition holds space for simultaneity, allowing us to take comfort in common circumstances. Memento mori in the shape of detached limbs, bulbous clouds, and crashing waves provoke a deep reflection on our own mortality, weighing loss of life against more fragmented forms of distress. Perhaps, like nature, grief will remain an omnipresent muse. If the last year has taught us anything, though, it’s to find poetry in these parallels. 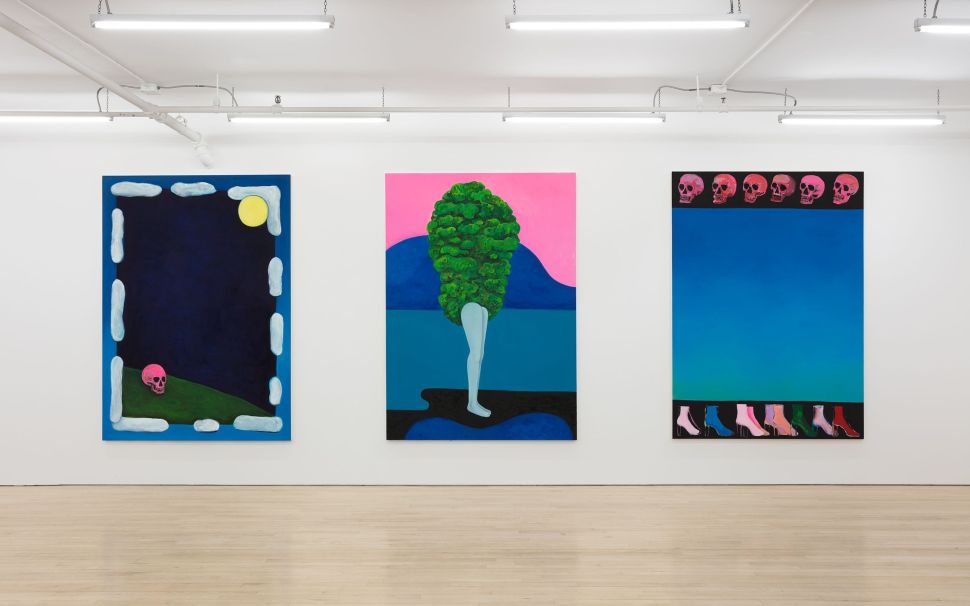