The second major film festival of the year, SXSW 2021, came and went this month, and with it another attempt at doing a completely virtual film festival. By now, it’s becoming clear what the flaws and benefits of an online film festival are, including the huge benefit of having closed captions on every film, but also how wrong it feels to not be able to easily talk to people after a screening.

SXSW was the first big event to get canceled last year due to the pandemic, and this year’s films sure reminded us of it, because there were a ton of movies set and made during the pandemic, perhaps a sign of things to come. Though the festival has been home to quite a few big premieres in recent years, including Jodan Peele’s Us, Ready Player One, A Quiet Place and Baby Driver, this year’s lineup focused more on providing a bigger and more diverse selection of movies rather than flashy premieres.

From terrifying and hyper-violent midnight movies, to tender dramas about connecting in these stranger times, to unexpected pregnancy comedies, poignant documentaries and plenty of musical moments, SXSW still felt like SXSW. Despite the circumstances, there were still plenty of great movies that could break big when they get released, so we’ve gathered some of the films we’re glad we saw during SXSW. Be sure to catch these titles if and when they get their wider releases later this year and beyond.

Natalie Morales makes her feature directorial debut with perhaps the best argument for movies shot over Zoom. A beautiful tale about the power of human connection that nevertheless recognizes the limitations and pitfalls of online-only relationships, the film follows a wealthy gay man played by Mark Duplass who strikes up a surprising friendship with his Costa Rican Spanish tutor (Morales). The film faithfully recreates all the online video chat frustrations like fuzzy connections, audio delays and at times even blank screens with audio-only. Language Lessons pretty much depends on the chemistry between its leads as well as its script, and it’s a relief to see it excel at both so effortlessly. If we’re to have more pandemic-made, “screen life” films, we’re off to a great start.

This movie won the SXSW grand jury prize for a reason. The Fallout features a career-defining performance from Jenna Ortega as a teen struggling to move on with her life in the aftermath of a school shooting. The Fallout is a melodramatic character study and a terrific directorial feature debut for Megan Park, a movie that is honest and bare about what it’s like to try and rebuild oneself after a tragedy while telling yourself it’s okay to feel pain in a manner not unlike how HBO’s Euphoria treated its teenage cast with the utmost respect and admiration. This movie marks the arrival of an exciting new voice in cinema, one that can and should open discussions about important and current problems.

The Spine of Night

Rotoscope animation is in need of a comeback, so having a hyper-violent throwback to epic fantasy animated films of the 1980s premiere as part of the midnight section of SXSW came as a pleasant surprise. The Spine of Night features an epic story spanning hundreds of years, with different heroes from different eras facing the same ancient magical source of power that corrupts everything it touches. The animation brings out the brutality of the action, and the cast features genre stars like a Lucy Lawless, Richard E. Grant, and Patton Oswalt. Despite some clear budget-issues, The Spine of Night will make you wish for the return of rotoscoped fantasy animation.

What if Knocked Up made Seth Rogen’s character the pregnant one? That’s the bare bones of Ninjababy, a delightful Norwegian comedy about a young woman who discovers she’s not only pregnant, but six months along. The film quickly goes from bleak, to quirky, to emotional in the blink of an eye, but it’s always grounded in Kristine Kujath Thorp’s character of Rakel. Ninjababy may have a well-worn story, but it manages to overcome its flaws with snappy dialogue, great chemistry between its leads, and some fun animation featuring the titular “ninja baby” who never stops criticizing Rake’s every move before it’s even born.

Justine Bateman makes her feature directorial debut with a drama that literally gives a voice to mental illness, with Olivia Munn playing an up-and-coming film executive struggling with impostor syndrome and microaggressions from her co-workers while Justine Theroux plays the domineering voice inside her head that criticizes everything she does. Violet pulls some clever visual and auditory tricks to get you inside the head of its protagonist and represent her thought-process, resulting in an intimate film that is both a poignant look at the many issues women face in the workplace, as well as a fascinating portrayal of self-doubt and anxiety.

SEE ALSO: Justine Bateman Made ‘Violet’ to Face the “Fear-Based Decisions” in Us

There’s a new trend of eco-horror films showing us the horrors we are committing against the Earth coming back to haunt us, and The Feast may be the best of the bunch. Lee Haven Jones’ West eco-thriller merges a bloodthirsty revenge thriller with woodland folk horror for a gruesome, darkly funny slow-burn that becomes even scarier in 2021. A wealthy family in the middle of an indulgent and gluttonous dinner party starts being terrorized by forces they don’t understand. The film boasts a deep and fascinating mythology, tons of twists and turns, and perfectly eerie atmosphere that results in the best midnight film of the festival.

The extremely meta, delightfully funny Fucking With Nobody is part romantic comedy, part director’s commentary on feminism, objectification, and creative labor in the film world, with hints of Waiting for Guffman and 8 1/2 amid the nonstop shenanigans. Hannaleena Hauru and Lasse Poser co-wrote the screenplay and star in this farce in which a talented female director—after having been passed over for a job—endeavors with her collaborators to create a parody Instagram romance. The ruse spirals increasingly out of control, and the resultant film is a Russian doll of winking self-referentiality.

I’m Fine (Thanks for Asking)

A hyper-specific portrait of American homelessness, I’m Fine (Thanks for Asking) might be my favorite “COVID film,” in the sense that it was clearly made in the middle of a pandemic with a concerted effort made to meaningfully weave its horrors into the story. I’m Fine is lean, charting the emotional and physical journey of a recently widowed mother (played by director Kelley Kali) and her daughter (Wesley Moss) across one day after they’ve lost her home and have resorted to camping. The mother, Dani, is one of the most sympathetic protagonists of the year, skating across town to customers who stiff her for her work, to apartment brokers who can only do so much to help her, and back to her tent, face the quotidian trials and injustices of a pandemic and inequality throughout the film.

A nuanced feature film debut from director Marion Hill, Ma Belle, My Beauty is a story of polyamorous love set in the south of France. Ma Belle, My Beauty is defined by the intimate conversations shared between the engaging leads Idella Johnson, Hannah Pepper and Lucien Guignard. The leads developed that under careful preparation on shared retreats. “The ability to be vulnerable, whether that’s emotionally vulnerable or physically vulnerable, doesn’t just happen,” Pepper told Observer earlier this month. “In any relationship, it takes a certain amount of continuous care, cultivation, attention.” The results are lovely narrative filmmaking.

Messy and intimate, See You Then is a lean 75-minute feature directed by Mari Walker and wracked with regret and longing. Its action plays out almost exclusively between two former lovers (played by Pooya Mohseni and Lynn Chen) who dated in college, one of whom has transitioned, as they reconnect and relive their struggles apart from each other in the intervening years. See You Then finds its drama in both dialogue and its quiet emptiness, with periods of silence underscoring the divide between them. As the film unfolds the conversation reveals how and why Kris abruptly left Naomi and the struggles both have dealt with in the intervening years. It’s a lot like the Before trilogy in construction—in its focus on two wholly sketched individuals with diverging experiences, its controlled length and its willingness to bruise its own knuckles as it fights to get at the heart of their pain.

WeWork: Or the Making and Breaking of a $47 Billion Unicorn

A striking indictment of one of the most catastrophic IPO failures in recent memory, director Jed Rothstein’s documentary is full of gloriously ruthless anecdotes that shed on a company defined by mismanagement on the part of its founder and CEO Adam Neumann and others in his orbit. One notable story from Alex Konrad, a senior editor at Forbes, feels characteristic of the larger effort and of WeWork’s failures. On assignment to interview Neumann, Konrad visited a WeWork location and ordered a cappuccino from one of WeWork’s in-house baristas, while Neumann ordered a latte. When the WeWork barista handed them the drinks, Neumann insisted that the drink labeled as a cappuccino was actually his. “Adam just looks really confused and upset,” Konrad recalls of the apparent flub. “And one of the staff is like ‘Oh I’m sorry, we actually call those lattes and those cappuccinos here,’ pointing at the opposite one. It stood out to me as a strange, gratuitous reality distortion moment around Adam because he was ordering lattes but wants cappuccinos. Rather than try to explain to him that he’s wrong, they’re just going to change the meaning of that word.” 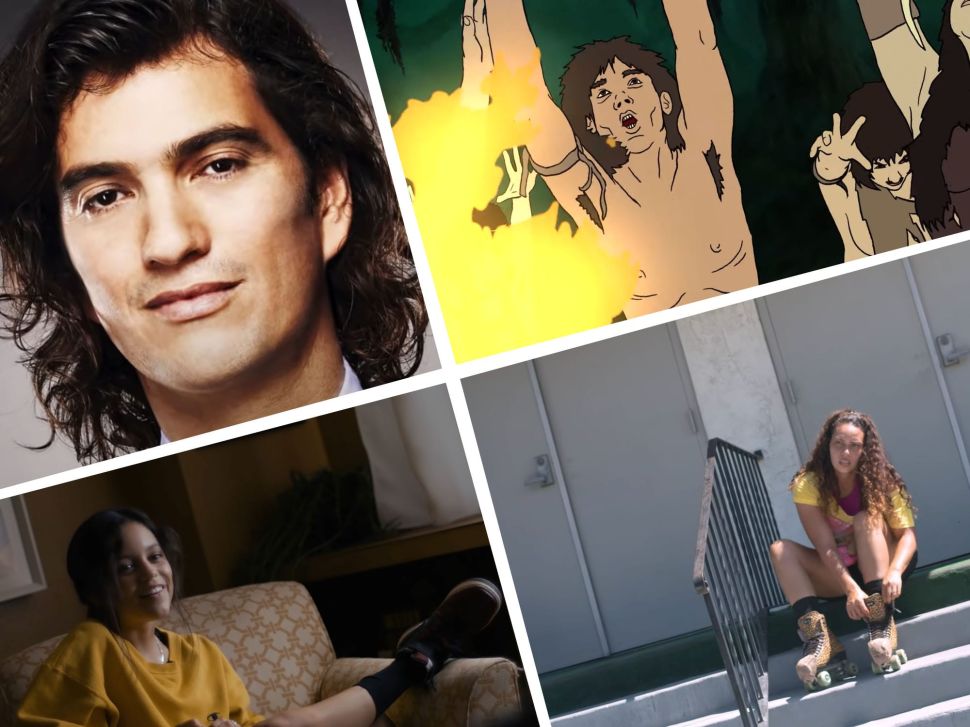 Filed Under: Movies, Entertainment, the feast, Violet, The Spine of Night