Canada’s most recent group exhibition, “Black Femme: Sovereign of WAP and the Virtual Realm,” reimagines a Black feminine temporality. Virtual and material realms collapse into each other, online existence bleeding into IRL representations of Black femininity, coagulating into a celebratory vision of the matrix in which blackness, femininity, and embodiment live. Black Femme does not dream of futurity as a utopic escape. It weaves and stitches together an abundantly colorful embodiment of the Black femme body through time and space, arriving at a future that is simultaneously present. “Black Femme: Sovereign of WAP and the Virtual Realm” is a celebration of the networked errors and glitches tied to the Black femme body.

The group show, which is open through April 10th, is curated by Christiana Ine-Kimba Boyle and features six Black women artists––Caitlin Cherry, Delphine Desane, Emily Manwaring, Kenya (Robinson), Sydney Vernon and Qualeasha Wood––whose work across digital and analog mediums “dismantle the restrictive societal confines imposed on the black femme body.” The title of the exhibition, both a reference to Cardi B’s sexually-charged “WAP” and Wireless Access Point (WAP), feels like an answer to miscalculations between race, gender and class often made by non-Black cyber feminists; Black femmes must navigate racialized embodiment both online and offline, despite cyberfeminists’ utopic vision of a virtual disembodiment that transcends race. Through a combination of paintings, videos, textiles and drawings, the artists explore this reality.

Qualeasha Wood’s pixelesque Jacquard tapestry, fore the day you die, you gon’ touch the sky, confidently weaves anachronistic religious and contemporary culture references with a wicked swagger. The tapestry presents a self portrait of Woods as Black messiah–the title being a reference to the chorus of Kanye West’s semi-religious “Touch The Sky,” wherein which he boasts of his predestined arrival at heaven’s gates. Left shoulder visibly outstretched to imply the presence of a phone, Wood’s is immortalized in selfie pose, adorned by glimmering glass bead halo and crimson crucifixion wound on her visible hand. Above her, decorative arched frames serve as symbolic screens, the blue woven sky appearing visibly pixelated while digital cursors point to Woods, prevailing on a medium they were never intended for–much like Black Jesus. A rendition of the hands from Michelangelo’s The Creation of Adam foregrounds this religiosity. In the world of this tapestry, Black femme as immaterial messiah is only a click away. Black Jesus is a woman and she’s online.

In a similar vein, Caitlin Cherry’s Her Burnout Tesseract, reimagines the way we see the bodies of celebrities, Insta baddies, and memed personalities alike. In her large scale painting, femme figures, including the infamous twin models Shannon and Shannade Clermont, the viral Nicole TV, and rapper Flo Milli, are rendered almost unrecognizable under seemingly lenticular iridescence–with the exception of Nicole, who noticeably retains realistic brown skin as the sole femme pictured whose online presence boils down to being entirely made a meme. Windows, or sections, of the pictorial space are disjointed, greyscale renderings bordering high-contrast chromatic swirls of color that mimic the digital screen under pressure when broken or pressed beyond its limits. This effect serves the Black femmes in the painting like camouflage, if what was being camouflaged was the metallic and delirious plumage of a peacock; for the Black women making a living through presentations of their bodies online, Cherry’s painting creates a hyper-saturated playground for them to seek refuge. These viral femmes who navigate self-representation in commodified online spaces become more inconvenient to appropriate, consume, and ultimately re-appropriate in light of this added dimensionality, asserting a Black feminine aesthetic that is coded by having some skin in the game. The glitched nature of the painting is delightful in so far as it creates space for an existence that transcends the skin of the body.

Emily Manwaring’s mixed media portrait also takes specific interest in a group of Black femmes. Swans Nwa pandan Matinée, which translates to “black swans during matinée” in Haitian Creole, imagines Black ballerinas free from any evidence of Eurocentric beauty standards. The black swans wear a uniform of large gold hoop earrings and acrylic nails, casually stretching, dancing, and talking in a familiar disorder. Manwaring affectionately adds texture through the addition of feathers, sequins, bobby pins, and a cheeky but ubiquitous price sticker on the painted Eco Style gel jar pictured next to the toothbrush intended for laying edges, baby hairs. In the midst of hair products, a small mirror of a makeup compact reflects a sweet self-portrait of Manwaring herself, who points a downward neutral gaze. Manwaring portrays a scene that despite not having much of a mainstream precedent, feels uniquely like a homecoming of sorts. This hybrid scene marries the world of ballet with intimate knowledge of Black feminine culture.

Delphine Desane’s paintings provide an intriguing corollary to this tone. I have a rendez-vous with Life displays a regal femme figure in a lush surreal landscape. Against the fluid backdrop of pastel blue skies and pink rolling hills, the femme figure’s dark complexion and stiffness are exaggerated, firmly planted with her visible fist tightly closed, while long and lacquered flowing strands of hair become entangled in tendrils of green that form the path ahead. The portrait takes its name from a Countee Cullen poem describing the tension inherent in having a lust for life in the face of anti-Black prejudice and hardship. Thus, the figure’s face lay stoic, cautious of the unseen path ahead, though her surroundings imply whimsy and a sense of playfulness. In To no longer think. Second act, Desane resolves this feeling of uncertainty. The same regal figure is seen up close, outfitted in a more extravagant dress against a more somber, and more teal backdrop, presumably hardened by the course she’s had to take.

Sydney Vernon’s deconstructed diptych, Untying Loose Ends, a mixed media portrait, and Tying Loose Ends, an almost six-minute video, pay homage to a familial matriarch. Lovingly, Vernon uses video, pastel, charcoal, paint, and X-ray imaging to conjure an intimate retrospective of one’s life, of what they sought to do and desired. Her mixed media portrait offers a farewell that seeks to remember rather than erase the unraveling of one’s interiority and inner life that often comes with passing.

Kenya (Robinson)’s work closes the show. Tucked away in a smaller viewing room, If I’d Known You Were Coming, I’d’ve Made You a Cake, a plastic resin sculpture, shares the space with (Robinson)’s video Patriot Games No 03052021. The video collages footage of Whitney Houston’s 1991 Super Bowl performance, an accompanying reaction video from Youtube vloggers Twinsthenewtrend, an instrumental from the viral “BeatBox” by teenage rapper SPOTEMGOTTEM, and visceral footage of (Robinson) sitting on what looks like red and blue Hostess CupCakes. The ensuing moving image opens a pandora’s box of grievances. Foremost, is the disreputation and destruction of late legend Whitney Houston in the public eye, but there is also much to be said for the broader implications of American policing and nationalism on the lives of Black American women. Footage of (Robinson)’s sitting on the cake becomes an erotic commentary on how the Black feminine body has been represented––wounds exploited, compressed, and fetishized as a sex object––when paired with cuts to Houston’s own powerful vocals and police presence at the Super Bowl. Throughout the video, the red of the cake, black of the skin, and the blue of (Robinson)’s strappy garments resound the violence that has become a fact of life for Black women. (Robinson)’s sculpture echoes these sentiments. We cannot have our cake and eat it too, so we might as well sit on it.

Though the works in this show felt vastly unique, “Black Femme: Sovereign of WAP and the Virtual Realm“ creates a discourse inclusive of all of Black femmes, influencers, models, memes, queens, and idols. Here, the Black femme reigns supreme. Here in this understanding of Blackness and femininity, glitch and failure invite the possibility for liberated expression and reflection. 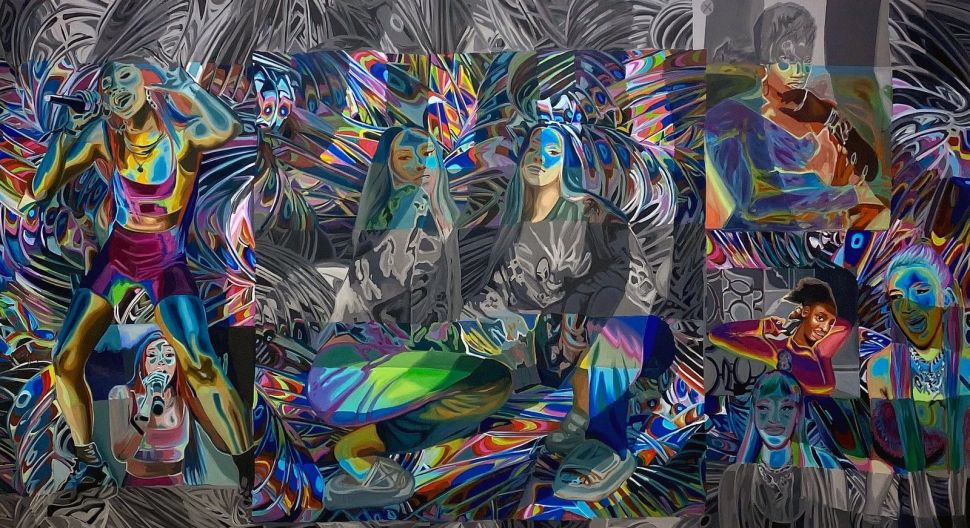