Buckingham Palace issued a statement today in response to Prince Harry and Meghan Markle’s explosive CBS interview with Oprah Winfrey. Among other shocking claims, the couple detailed Markle’s racist treatment within the family, including conversations over concerns of how dark son Archie’s skin would be and an unwarranted refusal of security and title to Archie. The racist conduct was not confined within the gates of Buckingham Palace, however. Markle recounted her difficult experience combating her treatment in the British and American press, comparing it to the “Wild West” in terms of its accumulation on social media and within tabloids.

The cumulative effect of media attacks and the lack of support from within the palace led Markle to contemplate suicide. “I just didn’t want to be alive anymore,” she said.

After retreating from royal life, Harry also revealed that the two have been completely financially cut off from the palace. They received no apologies from members of the family for their ongoing struggle. And Harry specifically noted strained relationships between himself and father Prince Charles and brother Prince William, hoping that “time heals all things.” The two had positive words for Queen Elizabeth II, however, describing her wonderful and understanding personality and the frequent Zoom calls she joins to see great-grandson Archie.

Buckingham Palace responded to the revealing two-hour interview. The statement is 61 words long.

The whole family is saddened to learn the full extent of how challenging the last few years have been for Harry and Meghan.

The issues raised, particularly that of race, are concerning.

While some recollections may vary, they are taken very seriously and will be addressed by the family privately.Harry, Meghan and Archie will always be much loved family members. 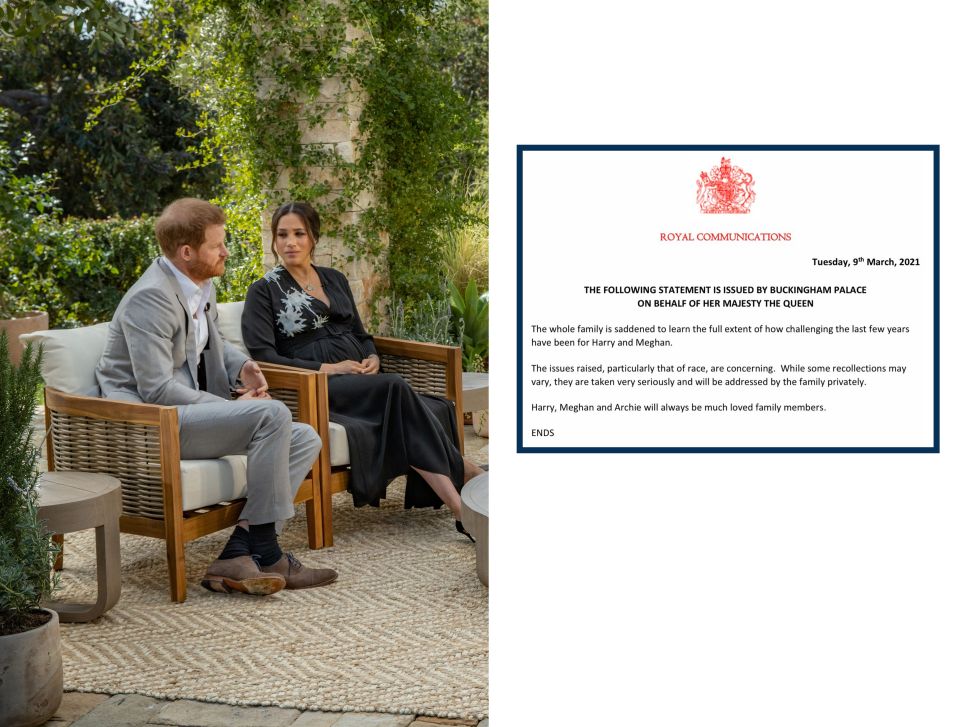