The once-popular notion that 2021 is going to be a breakout year for mass-market electric trucks looks increasingly bleak as more and more electric vehicle startup frauds are exposed and regulators close in. The good news, though, is that legitimate electric vehicle companies are making progress faster than ever, giving consumers more choices at affordable price points.

Right now, an average new car in the U.S. sells for around $40,000, according to Edmunds. To really crack the mass market, it’s critical for EV makers to lower the price of their battery-powered offerings to below that level. Resourceful industry giants are racing to introduce electric models that can compete with gasoline cars in both price and specs without the negative environmental impact, while some luxury automakers are also eyeing the mass market by offering low-range, city-friendly EVs.

Below we’ve rounded up six electric cars starting at below $40,000. Except for those made by Tesla and General Motors, which no longer qualify for federal tax rebates, all other cars are eligible for the $7,500 federal tax credit meant to spur sales of zero-emission vehicles.

Tesla has quietly raised the price of Model 3 and a few other popular models recently. The entry-level Tesla sedan now starts at $37,490 instead of $36,990, without tax incentives. The base option features a range of 263 miles, top speed 140 mph, and 0-60 mph acceleration in 5.3 seconds.

Ford debuted its flagship Mustang Mach-E in November 2019. The electric SUV starts at $42,895, featuring 230 miles of range for the rear-wheel-drive model and 211 miles for the all-wheel-drive version.

This vehicle is eligible for the $7,500 federal tax credit, bringing the real starting price to just over $35,000.

The ID.4 is Volkswagen’s first electric vehicle for the U.S. market. You can pre-order the vehicle on the VW website now, and delivery is expected to start in late March. The base version features 250 miles in range and top speed at just below 100 mph.

The 2022 Bolt EUV (Electric Utility Vehicle) is a roomier upgrade from GM’s popular Bolt EV. The new model boasts a range of 350 miles at a top speed of 93 mph. Like Tesla, GM has sold too many electric vehicles to qualify the federal tax incentive. So you’ll have to pay the full retail price for the new Bolt starting at $33,995.

The 2021 Hyundai Kona Electric boasts a long range comparable to Tesla’s Model 3 and Ford’s Mustang Mach-E and is cheaper than either model. The base version retails for $37,390. After the federal tax credit, the real cost falls just below $30,000.

BMW unveiled the Mini Electric in 2019 and began selling it last year. The urban-friendly car doesn’t quite match other mass-market EV in terms of size, driving range and speed. However, it’s also the cheapest in this roundup. After the $7,500 federal tax credit, Mini Electric starts just over $20,000. 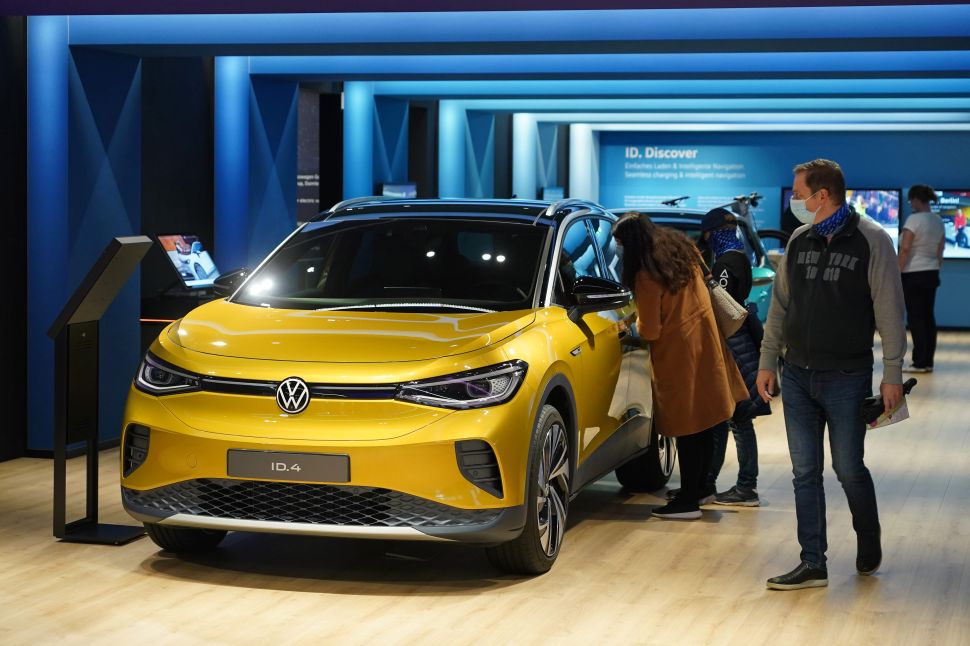