I saw Hannah Baer’s book, trans girl suicide museum, for the first time last January in a Los Angeles bookstore while walking aimlessly around hedges listening to love songs. I told myself: Not yet. Instead I thought the first month of lockdown would be a great time to investigate my gender, read Foucault, The Body Keeps the Score, and trans girl suicide museum. My biggest Virgo girl move to date.

Hannah Baer’s book was eye-opening for me. Baer’s book is a maze of thinking through “being a trap,” whiteness, memes, class, ketamine, and transitioning. It’s written in a frenzy of tender, diary-like entries that work through the complexities and paradoxes of trans womanhood.

As lockdown shifted, I continued to think about gender in public and private spaces. I returned to her book multiple times throughout the year asking many of the same questions. What did it mean to be a trap in public? What did I want to wear when I left the apartment? Why did I feel like people were staring at me all the time and all I could think about was my gender?

Baer’s book is incredibly deft in tackling a number of issues around gender with nuance, tenderness, and a humming drive forward through internet culture. It stands among many other recent memoirs about trans identity, from A Year Without a Name to Time is the Thing a Body Moves Through to I’m Afraid of Men. I wanted to talk to Baer about the book, its influences, and how perhaps things had changed for her since writing it. Originally, Baer was approached by Hesse Press about making a book of memes, but believed memes belonged on Instagram and in screenshot folders, so suggested instead what became trans girl suicide museum. Because of this, the book features memes captioned with the thought process behind them. We talked recently about think pieces versus feel pieces, ketamine, what the ‘suicide museum’ is, and memes.

Observer: Can you talk about the disclaimer at the beginning of the book?
Hannah Baer: I mean the disclaimer is funny, right, cause it on the surface appears to be serving the reader something like a trigger warning but in reality when we, we being creative people, generally put things like disclaimers or trigger warnings or statements of positionality, it’s exactly what you say we’re signalling in some way and I think I’m pretty literal about that but I also use the frame of that to be like, if you don’t want to encounter work by a white person with class privilege you can stop reading this. Which in a way is self protective. It’s a way of me being like don’t cancel me or something and I think part of that was, that feeling of self protectiveness, was about how vulnerable parts of the book are while still being accounts of someone with a lot of privilege suffering. Which is different, fundamentally I believe, than someone who doesn’t have a lot of privilege suffering… It was in earnest. I think it’s nice to cue people… I still wish that people who have class privilege and who are socialized and trained to make grand proclamations about things would realize that’s a socialized thing, that’s a positionality. And I think that transition was a good excuse for me to go all the way through the tunnel of my feelings about that as someone socialized to be a man with opinions.

It feels really tender, like what you say in the book of think pieces versus feeling pieces, the book feels like a feel piece.
I live in a perpetual treadmill of trying to avoid just being a hot take machine cause I think it’s just a waste of energy.

Can you talk about your relationship with ketamine? Or while you were writing the book?
Definitely for parts of the time I was writing I think my relationship was or would be categorized by a mental health professional as dependent. I think my relationship with it has changed a lot as my mental health has improved and getting FFS (facial feminization surgery) and getting a boob job and getting to walk around in the world in a way that feels less like freaky, in my own experience, but more so in the experience of people who see me. I think that ketamine is a great drug… It’s not indica/sativa yet. It hasn’t reached that level of cultural saturation… It speaks to something I say in the book about k, it was a drug that was a little unmapped. I think if I had been having really transformative experiences smoking weed it wouldn’t have felt as cool to be like ‘Hey everyone here’s my weed smoking memoir…’

Can you tell me about the ‘suicide museum’ and how you see that now?
I was talking to an acquaintance about going to museums and I was actually like I hate going to museums and I don’t miss that and that’s why that metaphor… Because museums are a reverse “I” statement. Impersonal. Hannah Arendt says this thing that architecture is the form of creative work that’s most like a thing and music is the least. But there’s a way in which making a museum as a way to organize knowledge is the least personal.

Part of what the museum was a metaphor for that a lot of people, a lot of trans people, especially trans women have written to me about and DMed me about is this feeling of when you’re transitioning of just being completely obsessed with being trans and not being able to stop thinking about it or talking about and not being able to relate to people who can’t hold you in that experience and the way that that is a constructed mental illness that comes from transphobia and not from trans people being crazy.

I feel in this part of my life like I have a more balanced relationship with thinking about being trans all the time which is still a big part of my life but I don’t feel so tortured by it. I don’t think that it’s universal. I meet and know people who are 10, 12, 15 years longer into their transition and are still really focused on how painful it is to be trans and how victimized they feel by their experiences.

One thing that’s been cool for me as someone who’s also studying to be a therapist is getting to sort of level up around the kinds of situations I can go into and the kinds of conversations I can have with people about it, whereas when I was “in the museum” or really, really in a ton of pain about gender stuff all the time it was really easy for me to get upset or not finish a conversation if someone said something kinda transphobic… I would just totally shut down or get upset. And it’s been cool to watch myself be able to do therapy with a transphobic parent who’s upset about their kid’s transition. And it’s not that it doesn’t upset me… but I feel my own resilience… Accepting myself being a mess and accepting that I might not ever feel better… that I might just be a messy bitch for a long time actually helped me be like I can actually set an alarm and wake up early and do my laundry, do all these basic mental health things.

What were some of the influences of the book- or things you think the book is in conversation with?
A lot of it was just the conversations I was having with my friends and that was part of what I wanted to give people or something that I felt in my internal struggle of: is it permissible to write a book of creative nonfiction, what a horrible phrase, or autotheory, also a bad phrase- or it embarrasses me to describe my work that way is what I mean when I say bad… I felt so lonely and I wanted to make something that would capture the power of some of the conversations I was having with some of my friends, such that someone else who was also really lonely could house some of that energy… I mean I read more now than I did then. Partly because of having a life where people relate to me as someone who writes in public. Cyrus and another friend and I started a press this year so I’ve been in a lowkey way also thinking more of myself as someone situated in the world in relation to literature… My feeling [is] that people shouldn’t work on stuff unless it’s actually gonna change someone’s life that day. And maybe that’s the real answer to the question part of what the book was in dialogue with is that feeling. You can make a book but it has to be so urgent that there’s no room in it for remoteness. It has to be like spending time with someone, it has to be able to move someone from one place to another. And hopefully writing like that, is what the press we started, Deluge, will proliferate. Something a friend said to me, they were like one thing that’s good about putting work out into the world is that it calls people to you. I think that’s one of my hopes for Deluge.

How did you get into making memes?
I was really depressed and addicted to Instagram. I got really addicted to notifications so I just started posting everyday. But before I was posting my own memes I was just looking at them all the time because I was depressed… I think there was a peak moment in 2016, I think a lot of the accounts that are big accounts like much bigger than me started around then and there was this moment where some people were trying to monetize their meme accounts and some people were trying to solve their mental illness… and it was funny to see that moment, we were all in group chats with each other. I obviously have a lot of neurosis about making, when I first started making memes I felt really neurotic about it, like maybe it’s taking up too much space, maybe some of the emotional stuff behind the disclaimer at the beginning of the book.  I think getting validated for making that work, helped me be like it’s ok. You can appear in public. You’re not harming anyone, per se. I think making memes, in the world I came of age people wanted to be famous writers or famous artists… and it was very clear to me that making memes wasn’t that, I knew I wasn’t risk of becoming a shitty downtown art person and that made it feel safe in a way that painting or even like writing a book weren’t… you might be on thin ice if you make this book and people like it because then you have to negotiate with stupid culture industry people. Because of my particular neurosis about cultural production spaces it was like a good fit for me. 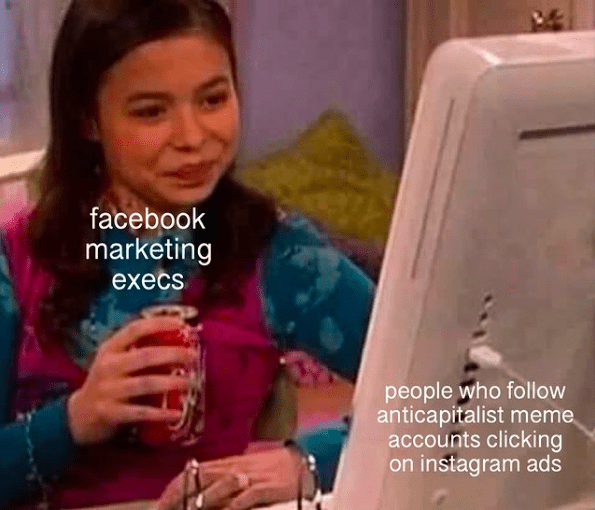