Helen Frankenthaler was an American painter who came into her own as an abstract expressionist in the 1950s. Her audacity and determination were matched by her talent. Endowed with incredible training at a young age, Frankenthaler wasted no time developing her career as a serious artist after graduating from Bennington College in 1949. Her privileged background helped in numerous respects, but in post-World War II New York City where the movement flourished, the field of artists was, predictably, masculine with Jackson Pollock as the leading figure. As a woman, it wasn’t enough to be gifted and financially stable. She needed to commit fully to her life as an artist in order to stay in the game.

Alexander Nemerov’s sharp and vibrant biography, Fierce Poise offers a distinctive portrait of the sustained challenges of a woman with considerable advantages. The biography concentrates on the first decade of Frankenthaler’s career, the 1950s. One of many reasons that Nemerov, a Stanford University art historian, grew up aware of Helen Frankenthaler was that she studied with his father during her senior year (1948-49) at Bennington College. Additionally, the last ten years of Frankenthaler’s life, Nemerov taught at Yale, roughly 45 minutes away from her Connecticut home. At no point during that time did Nemerov reach out to interview or simply speak with her despite these and other connections.

Nemerov’s lack of urgency or interest was in some part thanks to prevailing trends in art. During the last quarter of the 20th century, the art world gave greater merit to political power and discourse in contemporary art. Frankenthaler’s romantic approach to art fell out of fashion in the later part of her life and she found herself frustrated with artists such as Robert Mapplethorpe and Andres Serrano. Here was a woman of the Upper East Side in a pleated skirt telling a generation of artists ravaged by AIDS that their work was “mediocre,” calling upon them to “raise the level.”

It was only within recent years after having children, that Nemerov recognized that Frankenthaler approached her art with “the pleasure of someone who does not take life for granted.” He stresses, “A painting was for her the record of a personal experience exalted, transfigured, given staying power and enduring poise, so that the rest of us might be reminded of this special grace we often forget we, too, possess: namely, the feeling that we are alive.” She was no starving artist, but Frankenthaler did arrive at adulthood having lost her father when she was 11 and then her mother to suicide when she was but 25. Her privilege couldn’t shelter her from considerable personal grief. Nemerov seizes upon Frankenthaler’s ability to draw from private experience to articulate public feelings that create a more expansive and universal emotion rather than a personal narrative.

Frankenthaler had reason to deflect her attention from the details of her personal life. Beyond her wealth, Helen Frankenthaler’s personal history was of speculation from the start of her career. Her five-year relationship with the preeminent art critic of the time, Clement Greenberg has been labeled a deliberate and craven move. However, Nemerov persuades one to believe her relationship with Greenberg to be genuine. As a young woman keenly aware of the need to be at the center of the art world in order to succeed, Frankenthaler wanted to best understand the world around her. Frankenthaler wasn’t dabbling in art. She wanted to be with someone who shared her seriousness. She also understood the need to be well positioned to maximize exposure for her art.

When she posed for Life magazine in 1957, she knew that she could create a sensational portrait (it’s the arresting jacket image for Fierce Poise). Surrounded by her paintings in her studio, she blended her fashioned self-image into her work by sitting atop a painting (“Blue Territory”) to produce a powerful effect. What’s curious is that Gordon Parks, the photographer, is the only person of color mentioned in this book. His struggle as well as his vivid use of color photography to convey life and emotion is less abstract but no less pure or potent than Frankenthaler’s painting. Here were two radically different people who knew how to best package art and emotion. It’s an overlap that a longer book could explore at greater length and marks a rare moment where I was disappointed by Nemerov’s disciplined and narrow focus.

Keeping the biography tightly drawn to the 1950s gives Nemerov the space to speak at length about her work as well as the theory and motivation behind it. Frankenthaler read and was affected by the English translation of Simone de Beauvoir’s The Second Sex in 1953. De Beauvoir’s revelation that “women are not simply ‘women,’ but are, like men, in the fullest sense human beings” was second nature to Frankenthaler as was the perception that a “feminine character” was largely a performance constructed for and by the patriarchy. While Elizabeth Hardwick posited that women lack access to “experience” because of what she considered their more sheltered lives, Frankenthaler saw “opportunity, a deep artistic source unto itself, in which the feeling of life existed as fully as on the sweep of Napoleonic battlefields or in the scrum of intrigue among worldly cardinals beneath Michelangelo’s frescos.”

This limitless inspiration liberated Frankenthaler to see that “intimate private experience could itself be a kind of cosmos, a freedom of outer limits.” In her study of Old Masters, which was guided in some part by Greenberg, Frankenthaler recognized that the work of a great painter is to demonstrate to the viewer what it was like to be alive during a concrete point in time. Freed of financial constraints, she traveled widely (with companions and alone) and found within herself a considerable well of confidence. Nemerov remarks that “the beauty of Helen’s art, as she began to conceive of it, is that she, too, by looking deeply into the art of the past with an eye to her own moment, might still be a seeker, a religious figure; that she, too, could quest for a kindred feeling of ecstatic revelation, speaking a language of lovely and devastating sensation that was the parlance of her own time.”

Although she may have disputed this theory, her individual style of stain technique speaks to an innate understanding of the intimate experience of womanhood (menstruation, miscarriage, childbirth) which is quite fearless for its time. Likewise, her paintings’ atmospheric nature speaks to an awareness that completion or perfection is impossible. Rather, her works assert a deeper awareness of bodies and opportunity.

Praising her 1956 painting Eden as clumsy, Frankenthaler refutes a desire for intellect in painting. She was more focused on eliciting a charge from the viewer. Rather than set out to convey a specific message or master a precise technique with her art, Frankenthaler was drawn to uncovering unexpected ideas and feelings. She remarked, “If you always stick to style, manners, and what will work, and you’re never caught off guard, then some beautiful experiences never happen.” Nemerov expands on this thought, musing that, “Helen let the clumsiness stand, believing it opened out into richer worlds, more magical ones, than absolute control could ever portray.” Her ethos is a palate cleanser for perfectionist absolutists.

Interestingly, Frankenthaler’s coming of age is aligned with a messy moment of transition in American history. This slim biography touches upon considerable facets of history, art, and society in such a way that leaves you eager to read further and return to museum halls. It’s also a clear-eyed assessment. Based on a thumbnail biographical sketch, Frankenthaler possesses the potential of an Edith Wharton heroine. Yet Nemerov doesn’t slide into an easy narrative about an orphaned rich girl, striving to be an artist. Frankenthaler’s far too savvy and complicated for that. At the time of this biography’s publication, after years of waxing and waning interest in her work, the price for Frankenthaler’s work is rising as her auction sales climb dramatically. Yet, her life and legacy stands as a lesson that success, like fashion, comes and goes. What matters is the devotion you bring to your passion and your willingness to explore it. 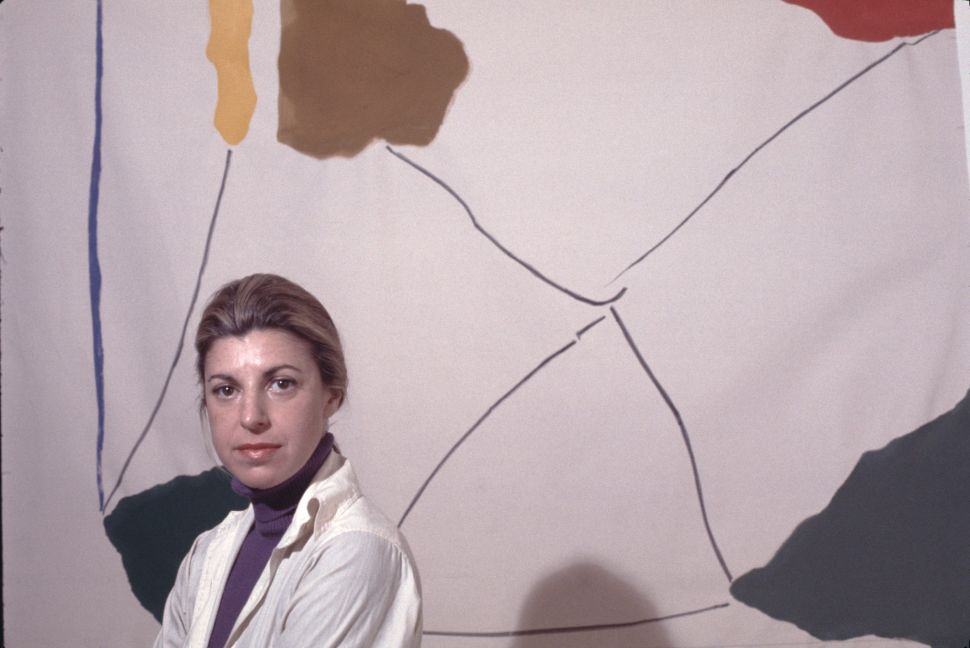