Two truths of the streaming revolution:

Tailoring content offerings to these two undeniable realities is smart business, but hardly ever guarantees quality. Just because you follow the instructions when assembling your IKEA furniture doesn’t mean your new bentwood armchair isn’t going to collapse the moment you sit in it. Fortunately for fans of both genre entertainment and animation, Amazon Prime Video’s Invincible is a great melding of good business sense and quality storytelling.

Based on the comic book character of the same name created by Robert Kirkman (The Walking Dead), Invincible follows Mark Grayson (Steven Yeun), a seemingly normal everyday teenager outside of the fact that his father Nolan (J.K. Simmons) moonlights as Omni-Man, the most powerful superhero on the planet. Shortly after Mark’s 17th birthday, he begins to develop powers of his own and is taken under his father’s wing to learn the ways of superhero-ing. The first three episodes, which were provided to critics, debut on Amazon March 26 with weekly releases to follow.

At the risk of invoking gluttonous hyperbole, Invincible is what you get when you mix the coming-of-age hormonal high school experience of Peter Parker with the excitement of Justice League Unlimited‘s many superhero team-ups and the sheer savagery of Amazon’s other hit comic book series The Boys.

What begins as yet another familiar father-son tale set in the crowded superhero space morphs into something else entirely by the end of the pilot. Without spoiling anything, this event completely re-writes the show you thought you were watching. Episode 1, “It’s About Time,” raises the concern that super powers may change who you are. Invulnerability and great strength on the outside can lead to dangerous developments on the inside. Who we are, and who we let our abilities turn us into, are the most dramatic unknowns in this world where the civilian public is as familiar with superheroes as they are celebrities and athletes.

Mark’s attempt to navigate the awkward pitfalls of high school—complete with romance, bullies, and friendships—give Invincible its Spider-Man vibes. Teenage years crank every emotion to 11 so that, good or bad, our feelings are always at the extreme ends of the spectrum. The show’s many superhero teams—Guardians of the Globe, Fight Force, Lizard League, etc.—is what helps build out this universe and its many big players à la Justice League Unlimited. Its brute force action is where the DNA of The Boys is present.

But what separates Invincible from its Amazon comic counterpart is how it doesn’t revel in its own gore. The Boys posits that power corrupts and that our capitalistic, mass-marketed and monetized consumer-driven society is the true enemy. That’s probably accurate. But The Boys is so gleeful in its violent depictions at times that its message can be drowned out by the gallons of blood that it spills. Perhaps because it’s animation or perhaps because showrunner Simon Racioppa modulates his restraint, Invincible doesn’t play with its food in the same way, despite heaping on the bone-crunching, gut-spewing action. With just three episodes, though, it also doesn’t have as defined a point of view as The Boys, which is likely by design.

Invincible plays well with the theme of duality. Heroes are meant to save us, and yet the callow capes and cowls make mistakes that get innocent people killed. Heroes are meant to represent the best of us, and yet their ability to compartmentalize is borderline sociopathic. In a world of super-powered beings, cataclysmic escalation is inevitable, yet they also still fight unsuccessfully for the luxury of private personal lives.

Omni-Man is the best vehicle for Invincible‘s pointed polarity. To the world, he presents himself as a model citizen of upstanding character and he does indeed save countless lives everyday. Yet he protects Earth not with the honor of a noble warrior but with the violent ferocity that would dissuade any future enemy from threatening us. He is the disproportional response masquerading as this world’s aspirational Superman. It’s not as transparent as Homelander in The Boys (another fascinating dichotomy), which makes it all the more terrifying and compelling.

If there’s one knock against Invincible thus far, it’s that Mark and his high-school set storylines fall in the shadow of the dark mysteries that ensnare his father. But there’s plenty of time in this eight-episode first season for the scales of intrigue to balance out. For now, we’ll simply say that Invincible is one of the best new shows for genre fans and a worthy addition to the oversaturated superhero market. 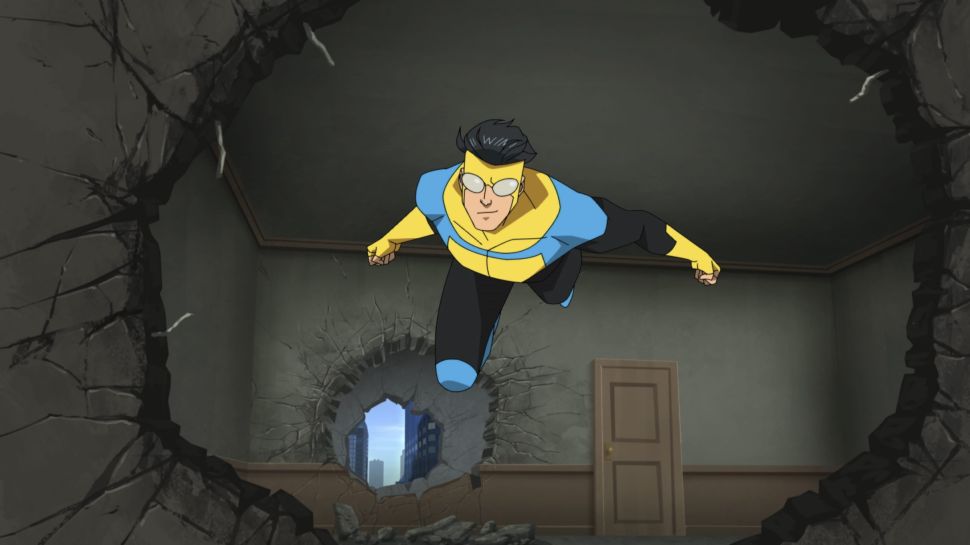