As a child living in Manhattan, the magic of Broadway was everything. But as an adult with an autoimmune disease living in California, I thought I’d never attend a Broadway play again. Sitting still for hours without the ability to prop my legs triggers pain and vasculitis, and even pre-COVID, flying was difficult due to my health.

In December, I was able to attend a Broadway performance (Jagged Little Pill’s live-streamed reunion concert) for the first time in over 20 years. It was so powerful that it felt like I was falling in love with music for the first time.

March 12th marked one year since Broadway went dark. The arrival of the COVID-19 vaccine brings hope that Broadway will reopen and theater will go back to “normal.” But this hope is tinged with fear for many members of the disability community.

The pandemic has paved the way for greater theater accessibility, allowing those physically unable to attend live theater the option to watch it from home. There is anxiety, however, particularly from people with chronic illnesses, that once digital accommodations are no longer needed for everyone, they will disappear.

These worries may be assuaged from Broadway producers who say virtual theater is not only necessary, but profitable.

Ken Davenport, Tony-award winning producer of Once On This Island, tells Observer that “virtual theater will serve as one of the greatest marketing tools that live theater will have in the next 10 to 20 years.”

Davenport, who made history in 2015 by becoming the first producer to livestream an Off Broadway performance, says that virtual theater reluctance comes from fear. The worry, he says, is that if performances are available digitally, people won’t fill Broadway seats.

“And I just have never believed that.” Using a baseball metaphor, he says that watching the Red Sox on television as a kid didn’t dim his desire to watch in-person batting practice at Fenway Park. If anything, he says, it increased his yearning to “see the Green Monster live.”

According to Playbill, Davenport’s 2015 virtual performance of Daddy Long Legs was viewed by over 150,000 people in 135 countries. To put that number in perspective, in 24 hours, Daddy Long Legs reached an audience it would have taken a sold-out Wicked 10.4 weeks to achieve.

This shows there’s a vast audience for virtual theater. A pandemic survey by Culture Track reveals that of those who watched virtual theater during the pandemic, 55% had not attended live theater the year prior.

Carla Sullivan, former VP of External Relations at the Shubert Theatre in New Haven, Connecticut, tells Observer that pivoting their performances digitally during the pandemic increased new-donor revenue by 75%.

Dr. Brett Ashley Crawford, an arts and entertainment faculty chair at Carnegie Mellon University, further explains to Observer: “Whether due to lifestyle, geography, disability or myriad other circumstances, many of these individuals will not magically attend in person because the pandemic recedes.”

There’s a market for virtual theater to continue in a post-pandemic world, but Crawford says contract and union issues may stand in the way. She says “the reason few Broadway shows are available is because of the contract differences between the ‘live performance rights’ and the ‘digital rights’.”

While this will need to be resolved for more Broadway shows to be livestreamed, Vivek J. Tiwary, the lead producer of Jagged Little Pill, tells Observer the future of theater accessibility is bright. When the lights return to Broadway, he says “I can definitely speak for Jagged Little Pill that you’re going to continue to see virtual offerings without question. And I believe that many of my colleagues’ shows are going to also do the same thing.”

Even pre-pandemic, the Alanis Morissette-inspired musical was a leader in accessibility. Its Grammy-winning Broadway album was released on opening night, which Tiwary admits was “very unusual”. He was steadfast that making the recording accessible was important. “We wanted people who aren’t in New York and don’t have access to Broadway to be able to hear what we were doing.”

Tiwary says that for Jagged Little Pill, accessibility “was always sort of baked into our DNA.”

The official behind-the-scenes book about the 15-time-Tony-nominated musical includes the entire script. Naysayers, Tiwary explains, “might have said, ‘don’t do that, because you’re giving away the story. And you want people to come and see it.’  And you know, we thought the exact opposite.”

Even before the pandemic existed, Tiwary believed that making Jagged Little Pill’s music and script accessible outside the stage doors would not minimize—but would in fact increase—its audience. Because accessibility was always top-of-mind, pivoting to digital during the pandemic was not a massive shift. Even though Broadway went dark, Tiwary says that Jagged Little Pill never really did.

The thinking was, “rather than go dark, let’s hold hands, stand tall and raise our voices. Do whatever we can do to keep delivering the Jagged Little Pill experience.”

And that’s exactly what they did. When producing the live-streamed reunion concert, Tiwary says the goal was “not to capture the show, but to capture the experience.” Vivek says the show was re-staged specifically for an at-home audience, and gives full credit to director, Diane Paulus and choreographer, Sidi Larbi Cherkaoui for re-creating the magic of in-person theater.

Tiwary’s pre-pandemic assumption that increased accessibility would mean increased popularity was correct. “Our fans have stuck with us and supported us. And also, to state a fact, our fan base grew over the pandemic.”

Dr. Leela Magavi, Hopkins-trained psychiatrist and Regional Medical Director for Community Psychiatry, California’s largest outpatient mental health organization, tells Observer this isn’t surprising. “My patients and friends with disabilities have confided in me and shared how much it means to them to be able to enjoy performances from the comfort of their own homes. Many of them have significant difficulty with daily functionality and would be unable to attend live theater.”

Watching theater from home, “they were so enchanted by the experience that for those few invaluable moments they did not feel the pain they endure each and every day.”

Holly Tedder, Director of the Center for Accessibility Resources & Disability Services at Barnard College of Columbia University, tells Observer that the ability to watch virtual theater “can be especially helpful for people with mobility differences, chronic pain, or other chronic medical conditions, who may be better able to attend performances from home.”

She says virtual theater “can also be helpful for folks who are Deaf or are hard of hearing and who would benefit from real-time captions or ASL interpretation being present directly on the screen.”

Lara Orriss, Artistic Director of UK theater company, Three Left Feet Productions, lives with a chronic illness. She says “As we consider the options for enjoying live performances in a post-pandemic world, it’s important to remember to provide meaningful access for all audiences,” herself included.

Art has the power to heal, and nothing has been more healing for me during this year of anxiety and dread than watching Jagged Little Pill live while snuggled up at home with my pit bull. Getting to viscerally feel Lauren Patten’s chest-banging roar as she demands to be seen and heard in her show-stopping rendition of “You Oughta Know” reminded me of the power of my voice.

So as I dream of the day I can safely watch Jagged Little Pill live at the Broadhurst Theatre in New York, I will keep using my voice to advocate for continued accessibility. Because magic should be readily available to all. 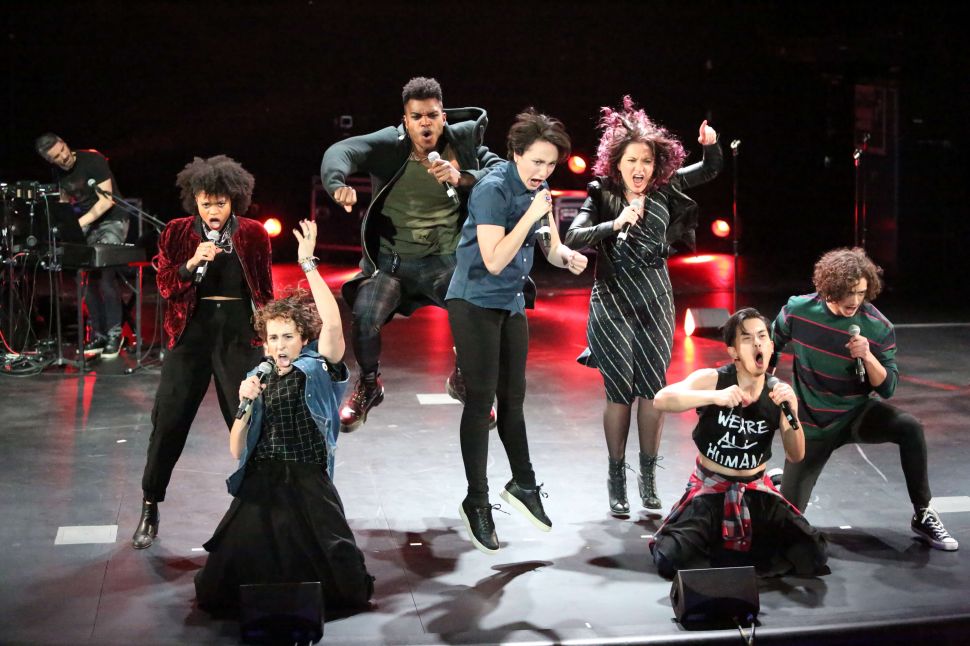