When one hears the term “celestial transits,” there’s usually an immediate implication of outer space and planetary movements. “Celestial Transits” is also the name of 25-year-old artist Kathia St. Hilaire and 36-year-old-artist Austin Martin White’s current exhibition, on view both in person and online at the Derek Eller Gallery in New York City. But for these two recent MFA grads, the concept of celestial transits is concerned with much more than just movement in space.

White told Observer the name “Celestial Transits” came to him when he was reading about Captain Cook, an 18th century British sailor and cartographer who, in Western literature, is often hailed for mapping previously uncharted lands, as well as the transit of Venus from the Pacific. However, the true nature of Cook’s charting was rooted in new “discovered” lands which eventually became exploited by the West. His death came after he attempted to kidnap the king of the Kanaka Maoli people when he was in Hawaii. This juxtaposition of science fiction and Cook’s limited purview of 18th century Europe is largely what spurred White to name the two-person exhibition “Celestial Transits,” as both his and St. Hilaire’s work re-examine race, post-colonization, and the land materials that have contributed to its history.

St. Hilaire and White met in the summer of 2020, when both were in a virtual group show at the Derek Eller Gallery, along with artists Melissa Brown, Jameson Green, and JJ Manford.

St. Hilaire, a recent Yale graduate with an MFA in painting and printmaking, grew up in a predominantly Caribbean and African American neighborhood in South Florida, while White recently graduated with an MFA in painting from The Milton Avery Graduate School of the Arts at Bard College. Eller suggested to White and St. Hilaire that they do an exhibition together, as both heavily utilize rubber as a textual and symbolic tool in their compositions. St. Hilaire, who often uses physical, everyday materials to explore her own narrative about the relationship between consumption and Haitian diaspora, says she was initially drawn to White’s piece, Untitled (Fragment of the Haitian Revolution), which depicts a migration of people, rendering orange and red etchings against a smokey, rubbery black backdrop. “I was very interested in the fact that Austin painted the Haitian revolution, because many say it’s still going on,” St. Hilaire told Observer. “The goal of being a free independent nation without having a European nation involved has not been achieved yet.”

While St. Hilaire used rubber tires during her last semester at Yale, she says that “Celestial Transits” influenced her to explore rubber as more of an aesthetic, textured material, rather than the narrative driver of her work. However, rubber has a colonial history too — specifically as it relates to necklacing, or the practice of throwing a rubber tire filled with gasoline over a victim’s neck and burning them alive. “The torture device was popular in places like South Africa and Haiti,” St. Hilaire says. “Rubber tires are bad for the environment, they never go away, and they have such a painful history. I felt like using rubber was a bold statement, and I loved the materiality of it.”

St. Hilaire’s multi-media work, Our Only Guide to Justice, centers a boy in blue swinging a rubber tire above his head in a seemingly circular motion. Limp figures lay on the ground around his feet, but many of their eyes remain open —they are not lifeless, just grieving. “I wanted the figures on the floor, because I wanted to show that they are still in power,” St. Hilaire says. “There’s still a future for them, even through grief.” However, the figures in St. Hilaire’s painting only become apparent when you step back, as a close examination renders the complex interweaving of canvas, tire skins, oil-based relief, and fabric. “I always want my paintings to bring questions about quality and how it’s made,” St. Hilaire explained. “It’s like when you first meet a person, the only thing you see is their skin. You don’t necessarily know where they’re coming from, their history, or anything about them.”

St. Hilaire’s connection to her Haitian identity can also be seen in her solid, immovable works — one of which is a set of drums. Their heads are wrapped with a deconstructed package of a particular skin lightening cream that has been passed down in St. Hilaire’s family for years. She says that drums hold cultural significance, as they were frequently used in the Haitian revolution to communicate with allies in different militaries. “I wanted to express the idea of consumption onto a drum to show that history, whether it’s through food, culture, or religion, still follows you and continues on,” St. Hilaire says. “However, these commodities often end up being used to hide yourself from society and assimilate instead.”

Like St. Hilaire, White’s paintings also meditate on the history of racial identities. His exhibition works come in three main sets: thedeathofacartographer, casta, and the dual pairing of moonmom with retrogradecaptive. While thedeathofacartographer series draws from Captain Cook and themes of Western arrogance, the remainder of White’s compositions aim to deconstruct the formative casta paintings that originated in 18th-century New Spain. These fictitious paintings depicted the outcomes of inter-ethnic mixing, as well as the social hierarchies to which the offspring and family would hypothetically belong. Much like the original casta paintings, White’s casta is divided into sixteen compartments, each consisting of a man, woman, and child. However, unlike the intentional racial depictions in casta paintings, the figures in White’s casta pull from a spectrum of colors, which become heavier as rubber is pushed through the painting. Growing up with an African-American father and English mother, White says he was originally drawn to casta paintings, because he wanted to find representations of people who exist in the in-betweens and to understand their relationships to history. “Historically, there have always been different attempts to categorize people by skin tone and castes,” Austin told Observer. “I wanted to abstract that by making my figures different colors in a way that was almost alien, in order to destroy the legacy of casta paintings and of categorizing people.”

“Celestial Transits” is on view until March 20th, but both St. Hilaire and White plan to continue exploring themes of post-colonialism and race in their art through the use of materials with traditional colonial ties. “We’re continuously dealing with the ramifications of the Western hierarchy today,” White says. “And with art, I want to go through images and history to try to explore who I am and how I relate to the world.” 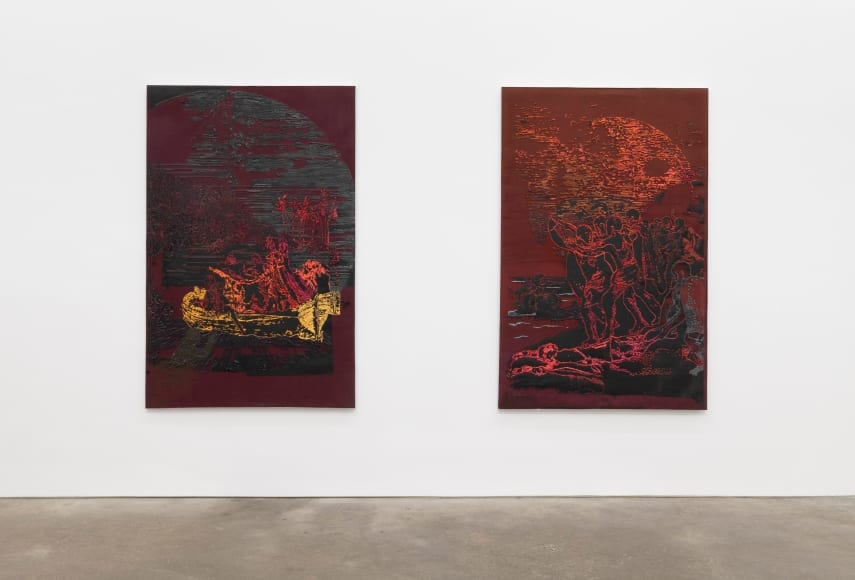