Conservative Christians are constantly telling us what is bad for children. They’re latest bad-for-children warning has been applied to Lil Nas X’s video for “Montero (Call Me By Your Name),” which features the queer singer and rapper being tempted into a slippery kiss with a male snake in the garden of Eden and then having anal sex with Satan himself. South Dakota Governor Kristi Noem had a typical full moral panic, complaining, “Our kids are being told that this kind of product is, not only okay, it’s ‘exclusive.’ But do you know what’s more exclusive? Their God-given eternal soul.” Rapper and singer Joyner Lucas couched the same critique in somewhat less incendiary language, complaining that kids love Lil Nas X’s earlier single “Old Town Road” and that many of them would have watched “Montero” with its “left field ish” before they were aware what they were getting into.

The extremely and delightfully online Lil Nas X has mostly responded to these criticisms by pointing out that his music is not for children—even “Old Town Road” has themes of adultery. “U decided to let your child listen, blame yourself,” he told Joyner Lucas on Twitter.

Lil Nas X is clearly right that he doesn’t have a responsibility to make his music child-proof or kid safe. But I think he could also have argued that the “Montero” video isn’t bad for kids. It’s good for them. We need more, not less, public acknowledgement of queer sexuality. As the parent of a queer teen, I firmly believe young queer people need to be told that they’re cool, inventive and awesome. They need to know that their fantasies are normal and that those who say otherwise are bigots and fools.

Over the last 20 years, our society has become a good bit more accepting of LGBTQ+ people. Gay marriage is legal; gay people are allowed to serve in the military. There are many more examples of openly queer people in public life, from Elliot Page to Lil Nas X himself.

Still, stigma remains powerful, and for many people, especially in evangelical Christian or right-wing communities, acceptance remains tenuous. Queer young people, in particular, are hugely dependent on the support of their parents—and that support is frequently not forthcoming. LGBTQ+ youth are 120% more likely to experience homelessness than their straight peers; 40% of homeless youth are LGBTQ+ even though queer people are only about 7% of all youth. Parents frequently toss their queer children out of their homes, or make home so miserable that the street seems like a better option.

Abuse doesn’t just come from parents. LGBTQ+ youth are twice as likely to be bullied as straight children, and that bullying is more likely to be a factor in suicide than in straight teens. And of course, politicians and public figures go out of their way to demonize and terrorize queer youth, and force them into the closet. Governor Noem, who attacked Lil Nas X for harming children, banned trans girls from sports teams in South Dakota by executive order this week. Arkansas also just passed a bill to ban gender-affirming care for trans youth. That goes against medical recommendations, and will likely increase depression and suicide among trans youth. These policies will kill queer youth. It’s hard to escape the conclusion that they are intended to do so.

“People will say I’m pushing an agenda. But the truth is, I am. The agenda to make people stay the fuck out of other people’s lives and stop dictating who they should be.” –Lil Nas X

In that context, it’s hugely important for young people to have access to pop culture that tells them it’s OK, or better than OK, to be queer. As the parent of a queer child (he/she/they), I’m very grateful we were able to watch Penny Dreadful when my daughter was in middle school.

Lil Nas X’s video “Montero”—the rapper’s real name—is even more forthright in its message to queer people, and yes, to queer youth in particular. Before the song came out, Lil Nas X introduced it on his Twitter account with a letter to his 14-year-old self. “I know we promised to die with the secret,” he wrote, “but this will open doors for many other queer people to simply exist.” He added “People will say I’m pushing an agenda. But the truth is, I am. The agenda to make people stay the fuck out of other people’s lives and stop dictating who they should be.”

The song starts with Lil Nas X performing a brief spoken recitation: “In life we hide the parts of ourselves we don’t want the world to see…but here, we don’t. Welcome to Montero.” The video then slides into a green screen fantasy of homosexualized Christian imagery, as Lil Nas X is seduced by (and/or seduces) snakes and devils while taking occasional time out to dress up in flouncy high-glam femme-wear. “I’m not faze, only here to sin,” he sings in gleeful Auto-Tune. “If Eve ain’t in your garden, you know that you can.”

The Satanic imagery has of course completely freaked out the Christian right, which thinks Lil Nas X is leading the children to Satan. And in their terms he is, since they’ve decided that queer people are a blasphemous stain on creation, who must be purged and erased. You want me to be the Devil? Lil Nas X’s video says. OK, than I’m the Devil—and I’m going to have Devil sex so weird and fun that your kids will want to run out and have that Devil sex, too.

“Montero” is supposed to be provocative. But it’s not (just) meant to provoke anger and outrage. It’s supposed to inspire, to amuse, and to comfort, too. It’s a love letter to Nas X’s younger self, and to all queer youth who have been told they’re evil, or wrong, or broken. Kristi Noem and her queerphobic, transphobic ilk don’t hate “Montero” because it’s a danger to kids. They hate it because it isn’t. Shame and stigma kill. Lil Nas X wants to give queer kids life. 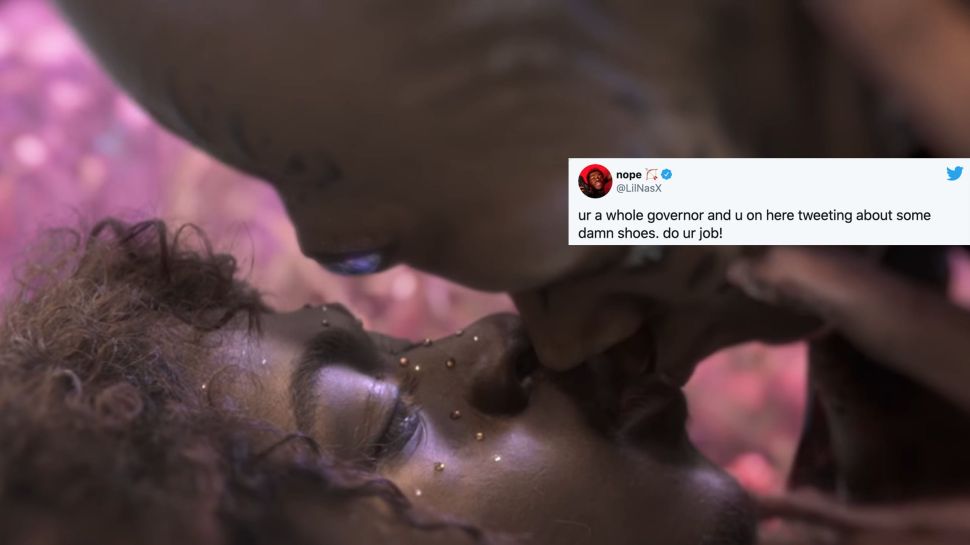