Lorraine O’Grady has spent the last four decades creating unparalleled art. And now her tremendous career has culminated in the first ever retrospective of the 86 year old artist’s work. “Lorraine O’Grady: Both/And” is currently on view at the Brooklyn Museum, is extremely overdue and could not come at a better time.

Born in 1934 in Boston, Massachusetts to Jamaican immigrant parents, O’Grady’s Afro-Caribbean heritage and personal history influences a lot of the art she creates. O’Grady attended Wellesley College and eventually found her way to New York City where she would become an integral part of its cultural milieu. An accomplished writer in her own right working as a music critic for The Village Voice and Rolling Stone, and even as an intelligence agent for the US government, and lecturer at the School of Visual Arts, these experiences laid the groundwork for the multimedia art practice she developed that influenced generations of artists.

After years of being entrenched in the art world she became increasingly aware of how insular it was and the larger issues of gender, racial, and class inequalities that have plagued it for decades. Now, nearly 40 years later, O’Grady accomplished what she set out to do and is finally getting the larger institutional recognition she deserves, with her work now being exposed to a more mainstream audience.

“Both/And” which spans multiple floors of the Brooklyn Museum is remarkable. It outlines O’Grady’s larger body of works which has been deeply invested in institutional critique as well as her larger efforts to challenge the art world, and center her experience as a Black woman. The pieces on display almost become absorbed into the permanent collection furthering the conversation O’Grady’s art has continued to have both inside and outside of the walls of the confines of art institutions. This exhibit is also part of the change that has been occurring within the art world when it comes to creating more inclusive practices and showcasing the work of artists who have been underrepresented.

In 1980, at the age of 45, O’Grady decided she wanted to become an artist. In her first ever public performance art piece, Untitled (Mlle Bourgeoise Noire), that same year she made a name for herself. This occurred through Mlle Bourgeoise Noire, O’Grady’s groundbreaking performance alter-ego, who has lived decades beyond the original staged performances. As Mlle Bourgeoise Noire, O’Grady created a costume which featured 180 pairs of white gloves and cat o’nine tails she found at thrift stores that she used to create a cape and dress accented with a whip made out of chrysanthemums. The now famous ensemble was created for an art opening she attended at Just Above Midtown (JAM), a groundbreaking art space in Manhattan that showcased work by African American artists and other artists of color. This performance was quite literally O’Grady’s way of bursting onto the art scene.

At JAM, O’Grady clad in her outfit and a tiara, used her whip to give herself 100 lashes, recited protest poems, and performed other actions to call attention to the kind of “white glove” treatment within the art world which excluded people of color, while also referencing the larger history of slavery. “Both/And” features the original costume O’Grady created as well as photographs from that now famous night.

Another performance from around the same time period that also had a lasting effect is Art Is… This piece, which is arguably one of her most well known, is joyous and triumphant in tone. The performance took place during Harlem’s African American Day Parade in September 1983, and was an interventionists act in which O’Grady and 15 participants entered their own float in the event. The float was topped with a 9’ x 15’ gold frame and a skirt along the bottom with the words “art is…” written on it making it a standout from the throng of others.

Dressed in white, O’Grady and the other performers jumped out along the parade route from the float holding gold frames inviting the crowd to pose in them and interact with them. The resulting photographs from it capture sheer excitement and document that day from multiple perspectives. In that moment the flip between performer and audience occurs and there is a breakdown between the two given the circumstances for participation she created. The photographs were taken by bystanders from that day and later collected by O’Grady furthering the larger collaborative spirit of this performance.

“And/Both” charts out a lot of territory in terms of the larger sociopolitical climate O’Grady was working within but also how her experience as a Black woman has been a source of the work she makes. Engaging with intersectional feminism, performance art, photography, installation, video, writing and other media, O’Grady’s conceptual practice has forced difficult conversations within the art world while also bringing light to systems of oppression. It is also trying to bridge the gap between some of these more famous performances, as well as the expansiveness and brilliance of O’Grady’s artistic practice.

Sometimes combining themes that seem to be at odds, O’Grady weaves them into a tapestry of complexity that bears further investigation. Through integrating her own personal history and personhood, the larger sociocultural history of race, gender, and class, and challenging notions of otherness, feminism, the role of museums and other themes, she has created works that live well beyond the time and context they were created under.

Within Miscegenated Family Album (Sisters I), L: Nerfnefruaten Nefertiti; R: Devonia Evageline O’Grady, O’Grady is further parsing the white narrative of history and is exploring her own personal history through family photographs alongside that of Egyptian royalty. This piece along with others from this series, features side by side images of O’Grady and Nefertiti. She is playing with the idea of how narratives are created both personally and historically, rewriting it as a conceptual project.

In “The Black and White Show” which O’Grady curated in 1983 consisted of 14 Black and 14 white artists shown alongside one another. The exhibition which was held at the Kenkeleba Gallery on East 2nd Street in Manhattan’s East Village, called into question how Black artists were being left out of mainstream museum and gallery spaces during this time. The show was a commentary on this larger practice while also creating an alternative context to showcase work.

Another work from this same time period is the Cutting Out The New York Times series. This installation is the first piece you encounter upon entering the show. In this work O’Grady literally cut up and reassembled lines of text from the newspaper to create a reconfiguration of the information. This action of cutting up the text and rearranging it fits squarely into O’Grady’s larger conceptual project and framing of challenging narratives to produce more radical states of being.

The retrospective is a testament to the sheer force of who O’Grady is and how far she has come. While the show features a number of her pivotal works from previous decades, there are also new pieces within it. These never before seen pieces reveal a new symbol that O’Grady is playing with ––the knight. The knight becomes a metaphor and is another way for O’Grady to reinvent herself and continue to challenge and push onward. The new works that are debuting as part of “Both/And” are also a sign that O’Grady has no intent to slow down anytime soon and nor should she. O’Grady is at the top of her game and many, myself included, can’t wait to see what she does next. 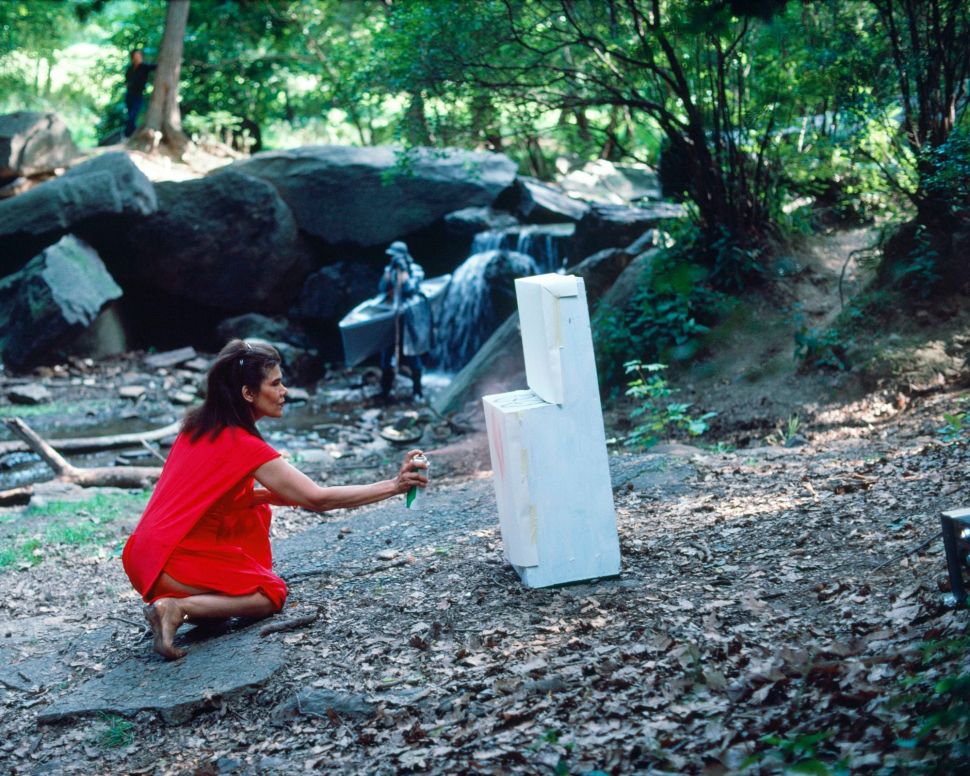