Transforming Viola Davis into 1920s blues singer Ma Rainey was no easy task, especially since her team of hair and makeup artists only had two weeks of preparation before production began on Ma Rainey’s Black Bottom. The actress’ dramatic, compelling look ultimately scored the film an Oscar nod for Best Makeup and Hairstyling — a nomination that has made history with the Academy Awards.

Hair department head Mia Neal and Davis’ personal hair stylist Jamika Wilson, who are nominated alongside makeup artist Sergio Lopez-Rivera, are the first Black women to be nominated in the makeup and hairstyling category at the Oscars. Wilson is still trying to wrap her head around the idea that she’s blazing a trail for other women to follow, but she’s aware of how important that representation ultimately is.

“Never in a million years did I ever think as a hair stylist, doing something that I absolutely love, that I would be nominated for this award,” Wilson tells Observer, speaking over Zoom with Lopez-Rivera. “And then to make history really just blows my mind. I’m just still trying to calm myself down and get used to saying this. People are like, ‘You know this is a really big deal!’ And I’m like, ‘Yeah it’s a big deal.’ But it should have been [history] a long time ago. I’m glad the doors are opening. It opens the door for so many other people who aspire to win the award or to get into the industry doing hair and makeup. You can achieve it.”

“I’m like, ‘Yeah it’s a big deal.’ But it should have been [history] a long time ago.” –Jamika Wilson

“It should have happened sooner, but it didn’t and it’s happening now,” Lopez-Rivera adds. “I think there’s a lot more value in acknowledging that this is happening now and this will not be the last time this will happen. The world is ever-evolving, so hopefully these things won’t take so long to happen anymore. Every artist, regardless of color, will have the chance to work — and do work that they’re proud of.”

Lopez-Rivera has been Davis’ personal makeup artist for years, and along with Wilson and Neal, he collaborated closely with the actress on how her character should look. They consulted with Davis on her feel for Rainey, as well as doing extensive research on the singer, the time period and what products would be available to Black women in that era. Because of the short preparation time, Lopez-Rivera quickly abandoned the idea of prosthetics, instead using makeup and gold teeth to create the aesthetic.

“There’s not very many images of Ma Rainey out there, so the pickings were very slim,” Wilson notes. “But there is a very iconic look of Ma Rainey with a beautiful headband on and the French bangs so we went from there. And we depended a lot on [costume designer] Ann Roth, who had all this information to pour into us.”

“I was shocked to find out there was really nothing available to Black women other than a couple of bleaching creams available for dark skin, which in and of itself is sending the wrong message, and then some terribly chalky powders,” Lopez-Rivera says. “Outside of that, Black women had to make do with whatever was available for white women or what they could make at home. So I took this idea that Ma couldn’t be bothered with shopping for Caucasian makeup and trying to make it work. She was a child performer and she joined vaudeville from an early age, so I imagined that was her training wheels. I wanted the makeup to reflect that theatricality, but also that homemade, jittery, vulnerable, badly applied but purposefully applied makeup.”

Davis’ wig in the film is made from horse hair, which is factually accurate to the 1920s. Neal researched and found the horse hair to build the wig, and everyone on the hair and makeup team wanted to be as authentic as possible. Throughout the film, especially during her performance scenes, Rainey’s makeup is smudged and dripping, her face covered in sweat. The idea that she wasn’t concerned with touching up her appearance came from several biographies Lopez-Rivera read, including one by one of her band members. Those visual descriptions were “gold” for the makeup artist, who notes that Rainey was considered to be the ugliest woman in show business, who also sweated profusely.

“Those two things are already building blocks for my design for a character’s makeup,” he says. “The very first time we see her, outside of the flashbacks of her performances, is when she’s coming out of the hotel. Her makeup is pretty well applied in that scene. It’s fresh, but it’s not perfect. It’s a little messy, but it’s appropriate. But as the day progress she has a bad day and it’s July in Chicago. She’s not one of these precious women who’s checking herself in her compact mirror. The story I told myself was that she did her makeup once and that was it. What you see is the result of heat, stress, struggle, claustrophobia in a visual way.”

Davis even referenced Bette Davis in Whatever Happened to Baby Jane when discussing the makeup design with Lopez-Rivera, encouraging him to allow her to be messy.

The work on Ma Rainey’s Black Bottom feels reflective on film and TV’s recent evolution where female characters don’t have to look pulled together or traditionally beautiful. 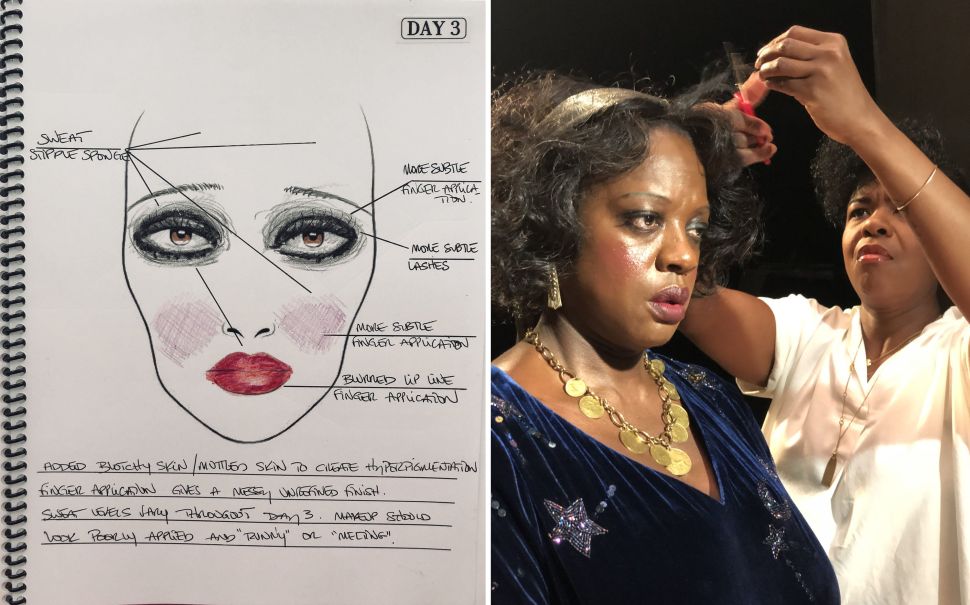