There was no shortage of shocking moments and revelations during Prince Harry and Meghan Markle’s big interview with Oprah Winfrey, which aired on CBS on March 7. The Duke and Duchess of Sussex addressed the rumors and lies spread over the past few years, and set the record straight about a number of false reports.

Early on during the Duchess of Sussex’s one-on-one conversation with Oprah, the media mogul asked about a tabloid story that claimed that Meghan made Kate Middleton cry in the days leading up to her wedding to Prince Harry. The story alleged that Meghan reduced the Duchess of Cambridge to tears due to a disagreement over the bridesmaids dresses at Prince Harry and Meghan’s nuptials.

It turns out that it was the other way around, as Meghan confirmed that Kate was actually the one who made the bride-to-be cry. “A few days before the wedding, she was upset about something pertaining—yes, the issue was correct about flower girl dresses, and it made me cry and it really hurt my feelings, and I thought in the context of everything else that was going on in those days leading to the wedding that it didn’t make sense to not be just doing what everyone else was doing, which was try to be supportive, knowing what was going on with my dad and whatnot,” Meghan said.

“I don’t say that to be disparaging to anyone, because it was a really hard week of the wedding, and she was upset about something, but she owned it, and she apologized, and she brought me flowers and a note apologizing and she did what I would do if I knew that I hurt someone. To just take accountability for it,” Meghan added.

Before going any further, it’s worth noting that this was definitely a high-stress situation and tensions were surely high all around, as Meghan was dealing with issues pertaining to her father, Thomas Markle, as well as planning her May 19 wedding, while Kate was just a few weeks postpartum, having given birth to Prince Louis on April 23.

The Duchess of Sussex didn’t go into detail on what was so controversial about the dresses, though it was previously reported that it might have been over whether or not the 10 little bridesmaids, including Princess Charlotte, should wear tights. Apparently, Meghan thought it would be too hot for the young girls to have to wear stockings (which any wedding guest who has had to attend nuptials in upsetting levels of heat can definitely relate to), while Kate preferred they don hosiery.

After a careful and entirely unofficial examination of these bridesmaids dresses, we can’t figure out what could be so upsetting about the frocks, though of course, emotions were running high.

The bride’s preference (rightfully) won out, and the girls looked truly adorable in their ivory silk frocks, which were created by Meghan’s wedding dress designer, then-Givenchy Artistic Director Clare Waight Keller. They looked very sweet in their puff-sleeved dresses, which featured silk ribbon bow details, pleated skirts and little white leather Aquazurra shoes, which were thoughtfully monogrammed with their initials and the wedding date—Meghan gifted each of the girls the shoes as a “keepsake of the special day.” They even wore influencer-approved flower crowns!

The 10 bridesmaids’ ensembles actually looked quite similar to the attire worn by the bridal party at Prince William and Kate’s 2011 wedding, right down to the flower hair wreaths, though the Cambridges’ bridesmaids were perhaps slightly more formal, which makes since considering their big day was at Westminster Abbey and had all the pomp and circumstance of the nuptials for a future king.

Anyway, Prince Harry and Meghan’s bridal party looked very appropriate and charming, sans tights and all, and Princess Charlotte *almost* stole the show when her sassy side came out and she stuck her tongue out at photographers.

Alas, things took a turn a few months later when the tabloid story came out that claimed Meghan made Kate cry over the dress dispute. Meghan told Oprah, “I would’ve never wanted that to come out about her, ever, even though it had happened. I protected that from ever being out in the world.”

Meghan explained, “What was hard to get over was being blamed for something that not only I didn’t do but that happened to me.” She added that people who were a part of her wedding did go to the comms team to try and clarify, and while they didn’t need to say exactly what had occurred, wanted to “at least go on the record saying ‘She didn’t make her cry.'”

The Duchess of Sussex explained that the most difficult part was that “Everyone in the institution knew it wasn’t true,” and that the media fed into it. “I would hope that she [Kate] would’ve wanted that corrected. And maybe in the same way that the Palace wouldn’t let anybody else negate it, they wouldn’t let her, because she’s a good person.” Despite the tabloid depictions of the “dueling duchesses,” Meghan said, “I think so much of what I have seen play out was this idea of polarity where if you love me you don’t have to hate her, and if you love her, you don’t need to hate me.”

Meghan did say during the interview that this was a “turning point,” and that this was around when the media coverage began to turn against her. If you missed out on watching Prince Harry and Meghan’s very revealing interview with Oprah, or if you just want to experience it all over again, you can still stream it on cbs.com now. 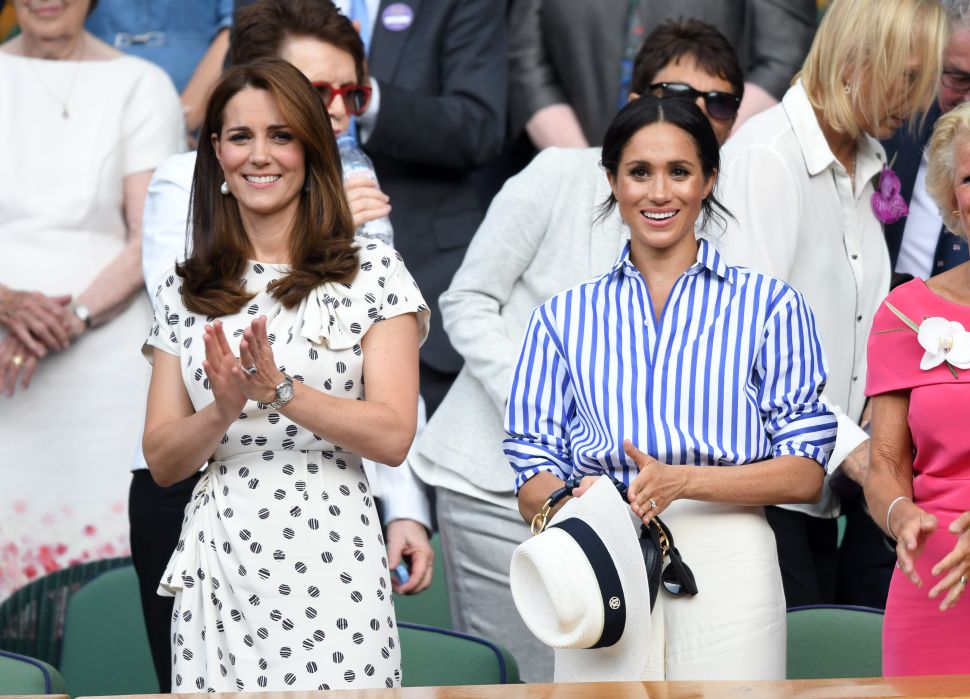