There was no shortage of truly jaw-dropping moments throughout Prince Harry and Meghan Markle’s interview with Oprah Winfrey, which finally aired last night. The CBS special marks the first time the Duke and Duchess of Sussex have participated in a joint interview since they stepped down from their senior royal roles.

Throughout the two-hour special, the Sussexes disclosed gasp-worthy (seriously, my neighbors probably heard me shrieking) tidbits like the fact that they actually got married three days prior to their royal wedding, that Kate Middleton is the one that made Meghan cry, that the royals cut Prince Harry off early last year and even their new baby’s gender. Meghan bravely revealed that she had thoughts of suicide during her pregnancy with Archie, and that the Palace wasn’t willing to let her seek outside help.

Even Oprah, interviewer extraordinaire, was left visibly shocked by some of what Prince Harry and Meghan laid bare during the conversation, and today, the media mogul made an appearance on CBS This Morning, where she chatted with hosts Gayle King, Anthony Mason and Tony Dokoupil and revealed what she thought were the most surprising bombshells during the interview.

Prince Harry and Meghan, Duke and Duchess of Sussex, sat down with @Oprah in their first major interview since stepping away from royal duties.@Oprah joins us exclusively with her reaction on that revealing interview. #OprahMeghanHarry pic.twitter.com/M4oqmbKGfR

After she was asked which of the many, many bombshells especially surprised her, Oprah said that she was shocked by the Sussexes’ revealing that there had been discussions among the Palace royals over their concerns about “how dark” the color of the Sussexes’ children’s skin might be. “I think the skin tone; the discussions about what color Archie’s skin tone would be, that surprised me,” Oprah said.

Like so many others watching, Oprah was also shocked when Meghan bravely disclosed that she contemplated suicide. “That’s why I clarified, ‘were you just feeling badly, were you feeling sad, of were there actual suicidal ideation thoughts of harming yourself,'” Oprah explained.

“I think that’s when the first jaw dropped for a lot of people,” Gayle King opined; Oprah agreed, and pointed out, “Even on the tape, you could hear me go like, ‘whoa.'” Also, same!

While the Duke and Duchess of Sussex were very open about much of what happened with the royal family and the Palace, they chose not to disclose who was behind the comments about the color their future children’s skin. Prince Harry told Oprah, “That conversation, I’m never going to share. It was awkward and I was a bit shocked.” Even though he declined to identify the people behind the horribly racist talk, he did later inform Oprah of who was *not* involved, and said that neither Queen Elizabeth nor Prince Philip was a part of the exchange. So, cue the guessing game of royal watchers all around the world. 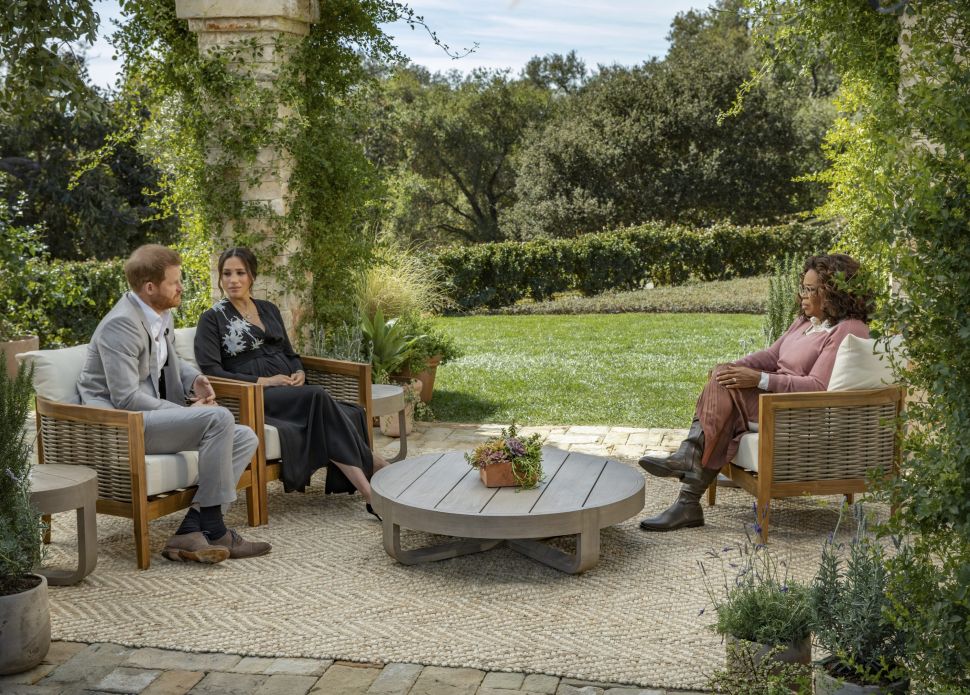