Mirka Madeleine Mora, or just “Mirka” to Melburnians, was a rare, radiant spirit. A leader in the development of contemporary art in Australia, she applied her vision across drawing, painting, sculpture and fabric craft. Born in France, Mirka lived through the Holocaust in her teenage years and it is that formative experience upon her as a human, a woman and an artist that explains her exhibition at the Jewish Museum of Australia, in Melbourne’s inner south suburb of St Kilda.

Across the spacious upstairs of the museum, various rooms provide wall space for Mirka’s paintings, letters, diary entries and manifestos in her gloriously romantic handwriting, and sketches. In corners and around the periphery of rooms, Mirka’s collections give a glimpse into her loving eye for vulnerable, precious things. Doll heads, a basket of magnifying glasses, teddy bears, porcelain people, paintbrushes and other ephemera abound.  Mirka’s works are so diverse in their colour schemes, sizes and media. Of all the glorious paintings, drawings and dolls on show, there are some that are immediately recognizable and compelling. Friends Under The Tree from 1980, an oil on canvas painting, depicts birds and children communing under a tree with a human face. The creatures are depicted in autumnal shades of bronze, oranges and browns on a luminescent green background. They look out at the viewer, almost curiously, as if they’ve been caught mid-play. Mirka was working in her city-studio in Rankins Lane, central Melbourne, during this period. Lovers With Friend, only two years’ later in 1982, depicts semi-naked human lovers entwined, a bare-breasted animal of some nature alongside. Around them, birds and flowers. In this magical garden of Mirka’s imagination, there is so much life. That is what most defines Mirka’s art and herself: her extraordinary and immediate presence that is so feminine in its nurturing, creative force.

During the Vel’ d’Hiv Roundup in 1942, Mirka was arrested. Her father, Leon Zelik, arranged for her release, thus avoiding Mirka and her mother, Celia Gelbein’s deportation to Auschwitz. Between 1942 and 1945 the family evaded arrest via living in the forest. After the war, Mirka met wartime resistance fighter Georges Mora and after marrying in 1947 when Mirka was 17, they migrated to Australia in 1951 with their first son, Phillipe.

A video playing on repeat in a downstairs room captures Mirka at her most confessional. Her grey hair, her large kohl-rimmed eyes, her soft, pale skin fill the screen. She is, like her paintings, both gorgeously innocent and cherubic but there is also a sadness to her, a propensity to sparkle and radiate mirth before – suddenly – becoming pensive. At one stage, she says we must always think of the dead. She reveals that despite Georges’ offers to move to Saigon, she was determined to move to Melbourne.  At 16, Mirka read Scenes de la vie de Boheme by Henri Murger, recounting the travels of a photographer across Australia’s south-eastern state of Victoria. It developed in her a desire to live the bohemian life in Melbourne, which she did for the remainder of her life.

One of Mirka’s most well-known images, featuring repeatedly in her paintings, are the lovers. The pair, intertwined, appear to cling to each other in a combination of both co-dependence and resolve that there simply isn’t any alternative but to be together. Are they lovers in the conventional sense, or are they mother and child, brother and sister, human and angel? Like many of Mirka’s beautiful  images – both abstract and figurative – of creatures both human and animal, the traditional roles they may fit are less important than the relationship between them – always loving, always tender, always open to embrace. They are images that are deeply feminine in their nurturing, nourishing nature.

Mirka had two more children during the sixteen years she lived in central Melbourne, William in 1953 and Tiriel in 1958. She and Georges would host marvelous parties, full of Melbourne’s most notable artistic talent at the Mirka Cafe on Exhibition Street, at the heart of Melbourne’s central business district to this day.

Mirka’s artistic world is one of gentle giants, soft-bellied creatures that are both primitive and animist in that every creature, even birds with breasts, appear intelligent and human to a degree. There are snakes, birds, rabbits, kangaroos, dogs, angels and naked humans.  In Mirka’s magical realm, they both love and hate each other but coexist, lucky to be alive and exactly as they are. Luck and love are two elements Mirka returns to in her video interview and visually, in her drawings, paintings and soft-fabric sculptures (or dolls).

“You remember every work,” Mirka said in an interview in 2010 for her exhibition at Heide Museum of Modern Art in Melbourne. “I think people will be very moved…people have known me for 50 years now, they’ve grown with me and my work.”

Over a decade later, sadly without Mirka’s joyful visage present, her work still moves people. Like Mirka’s own spirit, there is an eternal youthfulness to her creatures, a sense they may always be loving and battling each other. Infinitely alive, lucky to be here. 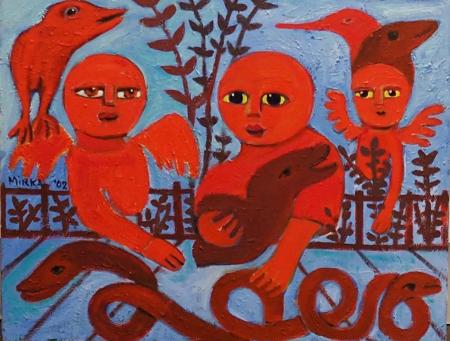