In the nearly three decades since the founding of Amazon and eBay, all companies entering the e-commerce business had a common goal: make delivery faster. It took an entire rewiring of the supply chain and mail system to finally speed up the industry-standard shipping time from 4-14 business days to just two days. But now, one of the space’s most entrepreneurial minds believes that the tide is turning.

Nate Faust, who co-founded the online retailer Jet.com in 2014 and sold it to Walmart two years later for $3.3 billion, the largest U.S. e-commerce acquisition to date at the time, has spent almost his entire career in the delivery aspect of e-commerce, with mixed success. After selling Jet.com, Faust stayed with Walmart as head of supply chain to help build up the retail giant’s online business. In late 2019, Faust took over Walmart’s struggling high-end personal shopping service, JetBlack, but failed to turn it around. Walmart shut down JetBlack in February last year.

By April, Faust was assembling a team for his new venture, Olive, a delivery consolidation service built on a bold premise: the belief that American online shoppers will be happy to wait for a few extra days in exchange for the environmental benefits of generating less waste.

“Initially, I thought my next venture would be completely outside of e-commerce,” Faust told Observer in an interview recently. “But one day, I was taking out trash for recycling. After 30 minutes of breaking down boxes and multiple trips down the driveway and seeing similar ridiculous pile of waste on my neighbors’ curbs, it dawned on me that it’s crazy that, after 25 years of e-commerce growth, this is the status quo delivery experience.”

Olive wants to reduce the waste problem by consolidating a customer’s online orders from different places and ship them all in one large bag to their home once a week. It’s sort of a middleman between retailers and their customers. Shoppers can access the service through the Olive app or its Chrome browser extension. Once someone places an order, the retailer will ship the package to an Olive warehouse, where it will be put on hold for a few days and be merged with your other orders. Olive will then deliver the orders in a reusable bag at a fixed time every week. (In New York City, it makes two deliveries every week.)

“Speaking of environmental impact, packaging is really just the tip of an iceberg,” Faust added. “The bigger issue is the fact that over 10 billion packages are dropped one at a time at customers’ homes. Having worked in this industry for so long, I know how that happens. There’s gotta be a better way for this to work.”

Because Olive makes weekly delivery to the same address, it’s also a convenient system for returning merchandise. If a customer wants to send something back, they can put put it in the Olive bag, which will be taken back on the next go-round of delivery.

That system is why Olive chose apparel retailers as its first partners. Apparel has the highest return rate among all online shopping categories, with more than 30 percent of packages end up being returned to the seller. And the process can be frustrating as return policies and methods vary from store to store.

Apparel is also the largest and most fragmented online shopping category, Faust explained, meaning that most people buy from a number of different retailers within a certain time frame, which makes package consolidation a much-needed service.

Most importantly, it’s free. Olive makes money by charging a small commission (average 10 percent) on its retail partners. Given the high price and profit margin of apparels, the economics works out for now. “That doesn’t work on other categories,” Faust admitted. “But over time, as we build up critical mass, we’ll be able to make the model work for more categories.”

Olive was officially launched in February. The service currently covers about a third of the U.S. population in bicoastal areas. 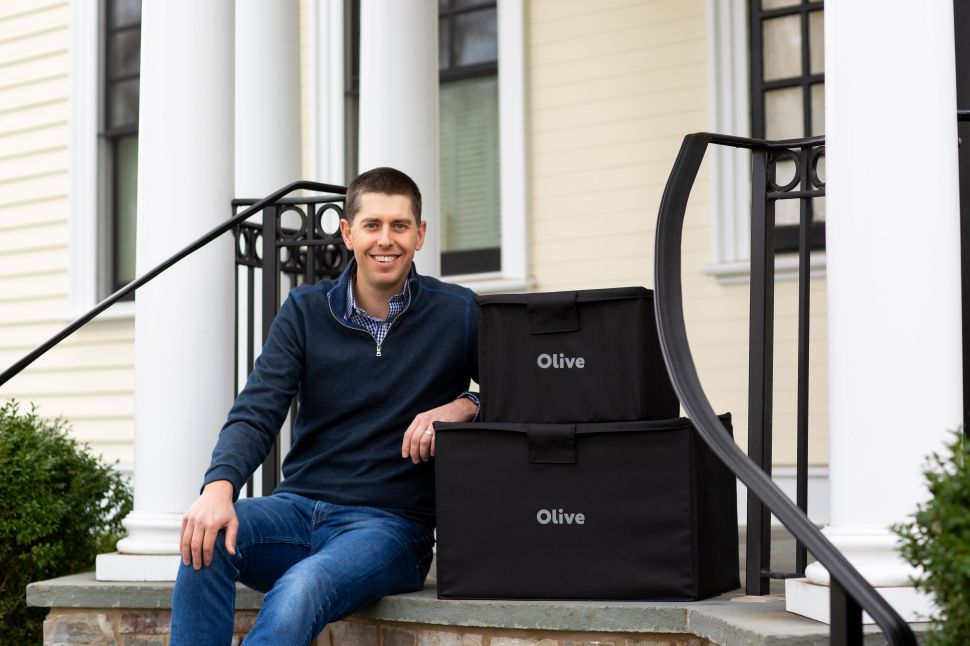