Today is the day that the streaming industry once again rematerializes with a new hierarchy as ViacomCBS’ Paramount+ officially enters the fray. The eighth major SVOD service to hit the market comes complete with bundles of live sports, breaking news, a collection of exclusive new originals, pre-existing hit series, notable franchises and popular movies. Paramount+ features more than 30,000 episodes of TV from across ViacomCBS’ brands and production studios, including BET, CBS, Comedy Central, MTV, Nickelodeon, Paramount Network, and the Smithsonian Channel. It also houses more than 2,500 films courtesy of Paramount Pictures and licensing agreements with MGM and Epix.

“The launch of Paramount+, which builds on our legacy of innovation and superior storytelling, is a significant milestone for ViacomCBS that demonstrates our commitment to being a global leader in streaming,” said Tom Ryan, President and Chief Executive Officer, ViacomCBS Streaming. “By combining fresh original content with live and on-demand programming and an established library of titles from world-class entertainment brands, we have created an unrivaled service that offers live sports, breaking news and entertainment for all audiences.”

But the average every day consumer already overwhelmed by Netflix’s endless sea of content may understandably be left with a few questions after yet another major streaming service pops up to jockey for their hard earned dollars. So allow us to play tour guide for you.

The good news is that existing CBS All Access accounts will move directly to Paramount+ and the app will switch over to its new format as well. You don’t have to do anything; just enter your CBS All Access login on Paramount+ you’re good to go. But, if you like what you see from Paramount+, there are different tiered options that you can choose from. And, come June, you may have a decision to make depending on frequently you utilize CBS All Access live CBS TV function.

How much does Paramount+ cost?

In June, Paramount+ will introduce a new ad-supported tier, at $4.99 per month, that offers live NFL games, news and entertainment, but no longer includes local live CBS station programming. That’s what pre-existing CBS All Access members must remember when the time comes. A $5.99 per month ad-supported tier, which includes live CBS programming, is available until June at which point only the $4.99 and $9.99 tiers will be offered to new subscribers.

Consumers can subscribe to Paramount+ online at ParamountPlus.com; via the Paramount+ app for iOS and Android; and across a wide number of platforms, including smart TVs, connected-TV devices, online, mobile, gaming consoles, and leading OTT providers. Paramount+ will also be distributed on major platforms in local markets internationally. The new Paramount+ app will begin rolling out across platforms today.

What movies and TV shows are on Paramount+ now?

Premiering today with the launch of the service is a slate of new originals, including The SpongeBob Movie: Sponge on the Run, the first-ever all CGI SpongeBob motion picture event; Kamp Koral: SpongeBob’s Under Years, a prequel series and the first-ever spinoff of SpongeBob SquarePants; MTV Documentary Films 76 Days, the Oscar Shortlisted documentary that looks at life in the earliest days of the COVID-19 crisis in Wuhan, China; For Heaven’s Sake, a docuseries blending comedy and crime for a unique take on uncovering the truth; The Real World Homecoming: New York, a reunion special with the original New York cast in the iconic NYC loft; 60 Minutes+, a new form of the flagship series that reveals the stories behind the news through original reporting and captivating interviews; and Stephen Colbert Presents Tooning out the News, the second season of the animated daily news satire series.

Other series exclusively found on Paramount+ include The Good Fight, Why Women Kill, The Stand, CBS All Access’ handful of recent Star Trek series, Coyote and more. There’s also a heaping helping of programming on the horizon. Unfortunately, the Paramount Network’s most notable series—Yellowstone, the most popular series on basic cable by far—is exclusively streaming on NBCUniversal’s Peacock. However…

What movies and TV shows are coming to Paramount+ in the future?

A prequel spinoff, Y: 1883, created by Yellowstone executive producer Taylor Sheridan is in the works for the service in the near future. ViacomCBS signed Sheridan, one of the most sought after writers in Hollywood, to an overall deal.

Also coming this spring to Paramount+ is an extensive lineup of live sports including every UEFA Champions League and UEFA Europa League match, culminating with the UEFA Champions League Final on May 29; coverage of the 2021 NCAA Division I Men’s Basketball Championship, featuring all of CBS’s games throughout the tournament highlighted by the National Championship game and Final Four with first-round coverage beginning on March 19; and CBS Sports’ coverage of The Masters. Eat your hearts out, sports fan.

The Paramount+ slate will also continue to expand with 36 exclusive originals coming to the service in 2021, including the following titles that will debut this spring: Rugrats, an all-new series featuring Nick’s iconic babies, back together with the original voice cast and an all-new CG animation style; No Activity, a half-hour police comedy that will transition from live action to animated for season four; and Behind the Music, the groundbreaking and prolific music documentary series returns with several new episodes and the best of the vault remastered.

Beginning late spring, the Paramount+ film library will grow to over 2,500 titles including recent hits from Paramount Pictures, such as Bumblebee, Crawl, Dora and the Lost City of Gold, Gemini Man, Like a Boss, Pet Sematary, Playing with Fire, Rocketman and Sonic the Hedgehog, as well as popular movies from MGM, such as Bill & Ted Face the Music, Skyfall, The Addams Family, Child’s Play and Valley Girl.

At ViacomCBS’ Paramount+ presentation, CEO Bob Bakish revealed that Paramount Pictures would join Universal and Warner Bros. in blowing up the exclusive theatrical window. Specifically, Bakish noted a 30-45 day theatrical run for Paramount’s films before they can be re-routed exclusively to Paramount+. To start, blockbusters such as A Quiet Place Part II and Tom Cruise’s Mission: Impossible 7 will play in theaters for one month before arriving on Paramount+. The goal is for these blockbuster films to attract swarms of new subscribers to Paramount+ while still earning the bulk of their box office money within the first four weeks of theatrical release, as is customary for most films.

Is Paramount+ available on Roku?

Yes, beginning today Paramount+ will make its official debut on all Roku devices. Roku boasted 51.2 million active accounts as of the end of 2020, up 39% from 2019. Much like HBO Max, this provides a far-ranging access platform for Paramount+ to reach users and subscribers.

When will Paramount+ be available outside the US?

ViacomCBS plans to expand Paramount+ to international markets with initial debuts in 18 Latin American countries and Canada today; the Nordics on March 25, 2021; and Australia with a rebrand and expansion of 10 All Access later this year. 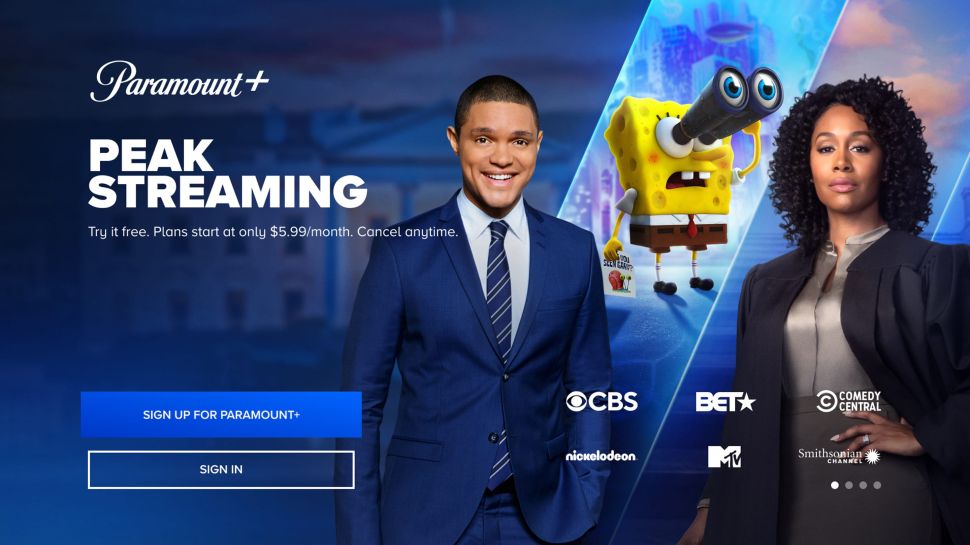