Speaking with Oprah Winfrey in a tell-all interview Sunday night on CBS, Prince Harry revealed that the royal family “literally cut me off financially” after he and Meghan Markle stepped away from royal duties. The Prince said the pair were cut off in the first quarter of 2020 shortly after publicly announcing that they would no longer be active working royals. Harry cited the money left to him by his late mother, Princess Diana, as a huge help at this time in their lives.

“Without that, we wouldn’t have been able to do this,” he said of the family’s move to California.

But the pair have been shrewd about planning their future amid a tumultuous split from the royal family and the financial stability that comes with it. In September, six months after their split from the House of Windsor, the duo signed a multiyear deal with Netflix to produce documentaries, series, feature films, scripted shows and children’s programming.

“Our focus will be on creating content that informs but also gives hope,” the couple said in a statement at the time of the announcement, per the New York Times. “As new parents, making inspirational family programming is also important to us.” They added that Netflix’s “unprecedented reach will help us share impactful content that unlocks action.” Netflix currently houses more than 200 million global subscribers.

Though it remains unconfirmed, estimates and reports peg the value of the deal at north of $100 million.

“We’re incredibly proud they have chosen Netflix as their creative home and are excited about telling stories with them that can help build resilience and increase understanding for audiences everywhere,” Ted Sarandos, Netflix’s co-chief executive and chief content officer, said in a September statement.

In December, the Duke and Duchess of Sussex also entered a partnership with Spotify through their production company, Archewell Audio. The pair will host and produce podcasts in a deal estimated to be worth around $25 million. Harry and Meghan hope to promote “different perspectives” and feature interviews with “amazing people.” Their first episode, a 2020 holiday special, arrived on the service Dec. 29 and featured famous guest appearances from Sir Elton John, James Corden, tennis champion Naomi Osaka, author Deepak Chopra, spoken word performer George the Poet, filmmaker Tyler Perry, and British activist Christina Adane.

In a recent appearance for Spotify’s Stream On event, the couple stated that they are “using podcasts to drive powerful conversations that inspire, challenge and educate.”

Markle added: “We created Archewell Audio to make sure that we can elevate voices that maybe aren’t being heard, and hear people’s stories.”

One of the first projects under the pair’s Netflix deal will be an animated series focused on inspiring women, which is reportedly already in development. But, a future in streaming was not a considered possibility at the time of the couple’s split from Windsor.

“This was never the intention,” Harry told Winfrey during the couple’s Sunday night interview. “We’re certainly not complaining, our life is great now, we’ve got a beautiful house, I’ve got a beautiful family. The dogs are really happy. At the time during Covid, the suggestion by a friend was ‘what about streamers?’ and we hadn’t thought about it. There were all sorts of different options and from my perspective, I just needed enough money to pay for security to keep my family safe.”

“Life is about storytelling,” added Markle. “For us to be able to have storytelling through a truthful lens that is hopefully uplifting is going to be great, knowing how many people that can land with and be able to give a voice to a lot of people that are underrepresented and aren’t really heard.” 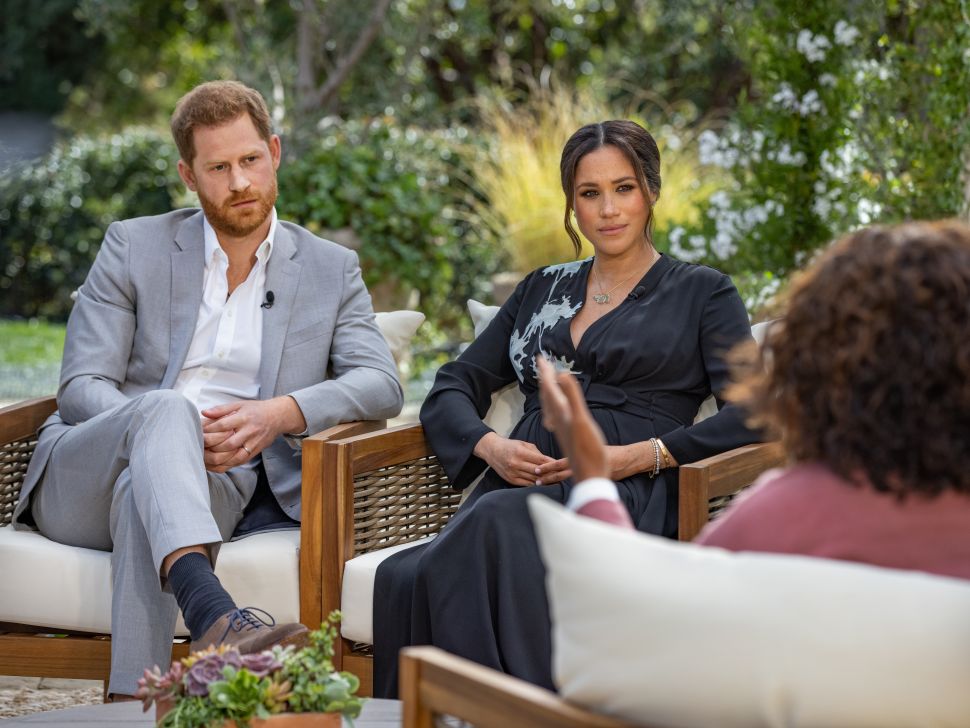