The dust is still settling from Oprah Winfrey’s explosive two-hour interview with Prince Harry and Meghan Markle on Sunday, and the revelations are devastating. Markle, pregnant with the couple’s second child, described the racist treatment she endured from social media, the British press and the royal family itself. “My regret is believing them when they said I would be protected,” she said. “And I regret believing that because I think had I really seen that that wasn’t happening, I would have been able to do more, but I think I wasn’t supposed to see it.”

Harry and Meghan also addressed the status of their current relationship with the other members of the family, including Prince William, Kate Middleton and Queen Elizabeth II. Acknowledging brother Prince William’s fixed relationship within the “system,” Harry noted the increased space between the two and that “time heals all things, hopefully.” More broadly, the couple seemed to emphasize the importance of peeling back the fairy tale facade of their experience as royals. “You have no idea what’s going on for someone behind closed doors. No idea,” Meghan said. “Even the people that smile and shine the brightest lights.” With too many moments to choose from, here are just six of the biggest reveals from the interview:

“I just didn’t want to be alive anymore.”
–Meghan

Meghan opened up about the suicidal ideations she experienced while inside the royal family, recounting an outing to Royal Albert Hall in which she told Harry that she “could not be left alone.” She emphasized the courage it took to admit her need for help and the fear of what would happen if she did not confess her mental health struggles. “I knew if I didn’t say it — then I would do it.”

There were “concerns and conversations about how dark his [Archie’s] skin might be when he’s born.”
–Harry

Prince Harry revealed that a shocking conversation about his son Archie’s skin color took place early in the early stages of his relationship with Meghan. Although neither Meghan nor Harry would reveal which family member made the comments, Oprah added context to the conversation on CBS this morning. “He [Harry] wanted to make sure that I knew, and if I had an opportunity to share it, that it was not his grandmother, nor his grandfather that were part of those conversations.”

“They didn’t want him to be a prince.”
–Meghan

In an unexplained break from protocol by the palace, Archie did not receive the courtesy title of Earl of Dumbarton. The decision also limited his security, unearthing new concerns for his safety. “He needs to be safe,” Meghan said. “But if you’re saying the title is going to affect their protection, we haven’t created this monster machine around us in terms of click bait and tabloid fodder. You’ve allowed that to happen, which means our son needs to be safe.”

“Rude and racist are not the same.”
–Meghan

“If a member of his family will comfortably say ‘We’ve all had to deal with some things that are rude,’ rude and racist are not the same,” Meghan contrasted the press treatment she and Kate Middleton received, noting the ways in which race, social media and her American identity exacerbated her exploitation in the media. “Kate was called ‘Waity Katie,’ waiting to marry William,” Meghan said. “While I imagine that was really hard — and I do, I can’t picture what that felt like — this is not the same.” This global attention “spread like wildfire” and contributed to a noise level incomparable to other royal experiences. Nonetheless, Meghan made a point to reject media narratives pitting her against her sister-in-law. “If you love me, you don’t have to hate her. And if you love her, you don’t have to hate me.”

“The feeling is that this was our decision therefore the consequence is on us.”
–Harry

Harry and Meghan revealed that no members of the royal family have reached out and apologized for the circumstances that led to their retreat from the family. Prince Charles’ lack of sympathy was a particular source of pain for Harry. “There’s a lot to work through there,” Harry said. “I feel really let down because he’s been through something similar. He knows what pain is like. And Archie’s his grandson.”

“Three days before our wedding, we got married. No one knows that.”

Meghan recounted the simple backyard ceremony the couple conducted before their public nuptials, an effort to preserve the intimacy of their union. “We just said ‘look, this thing, this spectacle is for the world but we want our union between us,’” Meghan said. “The vows that we have framed in our room are just the two of us in our backyard with the Archbishop of Canterbury.”

“I have spoken more with my grandmother in the last year than I have done in many, many years.”
–Harry

Harry said. Despite the changed family dynamics, the two remain in good standing with the Queen. “My grandmother and I have a really good relationship and a good understanding,” Prince Harry said. Meghan echoed the sentiment, stating that the Queen has always been “wonderful” to her. The Queen has hopped on Zoom several times to see great-grandson Archie, turning two in May.

Despite the positive relationship, however, the Queen abruptly called off a meeting together after the public announcement of the couple’s royal exit in January. Oprah asked, “Doesn’t the Queen get to do what the Queen wants to do?” Harry shed new light on the outsized influence of the Queen’s advisors in his response. “No,” Harry said. “When you’re head of the firm, there are people around you that give you advice, and what has also made me really sad is that some of that advice has been really bad.”

The National Suicide Prevention Lifeline provides 24/7, free and confidential support for people in distress, prevention and crisis resources for you or your loved ones, and best practices for professionals. If you or a loved one need help, dial: 1-800-273-8255. 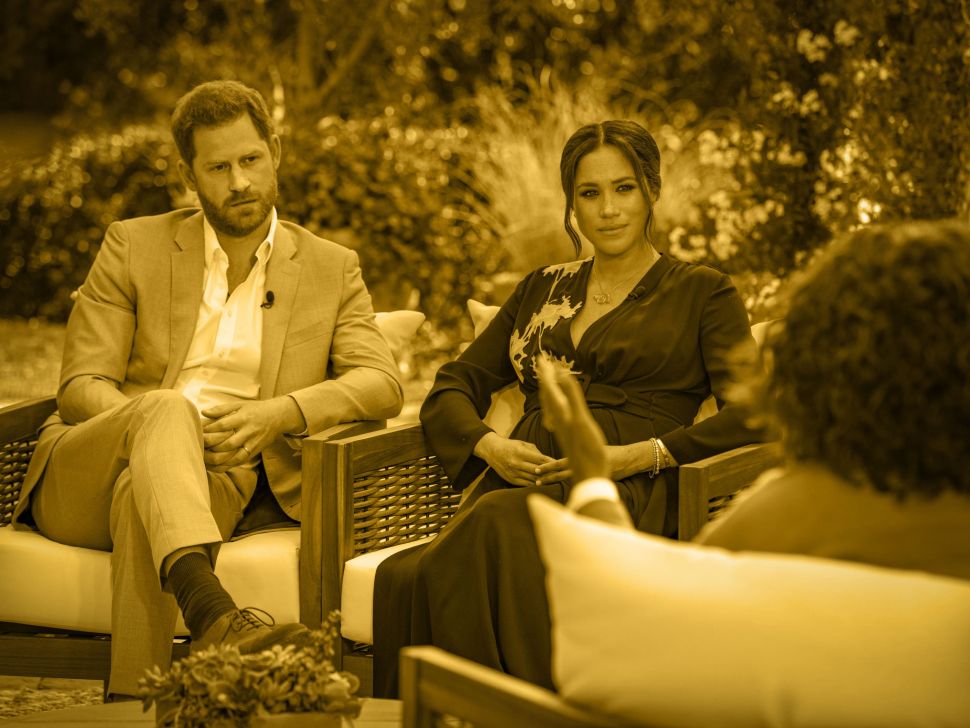