When animator Max Fleischer conceived what would become rotoscope animation—the cartooning technique where live-action footage is traced over, frame by frame, to produce realistic action—he meant for it to be a cheap sort of short-cut to imagining wholly new animated poses frame by frame. Ralph Bakshi later resorted to using the technique for his 1977 film Wizards, mostly because the studio refused to increase the budget, and the result was not only Wizards but an ensuing series of hyper-violent, high concept fantasy animated films unlike anything seen before in American animation, like 1981’s Heavy Metal and 1983’s Fire and Ice. Now, 40 years later, The Spine of Night is trying to bring back both the good, and the bad side of rotoscope animation.

The Spine of Night follows a nude woman (voiced by Lucy Lawless) wearing only small pieces of bone armor, who encounters the armored guardian of a place of great and ancient power (Richard E. Grant). She tells him that the power has already been unleashed, and so begins a quasi-anthology tale spanning a millennium, as the power of the “Bloom” involves a corrupt prince (Patton Oswalt), a mercenary barbarian (Joe Manganiello), an innocent warrior (Betty Gabriel), a self-proclaimed messiah sorcerer with enormous power (Larry Fessenden) and more heroes and villains across different cultures and eras.

Right out of the gate, Europa Report screenwriter Philip Gelatt and animator Morgan Galen King want to make sure the audience knows that this is far from the slapstick comedy movies and TV shows like South Park, Rick and Morty or Harley Quinn that dominate adult animation in the U.S. Instead it is very much a love letter to the brief period in the ’80s where high fantasy could expand from cheap live-action movies to rotoscoped animation epics that were limited only by the filmmakers’ imagination. On the fantasy side of things, the film is quite ambitious, introducing characters for just a couple of minutes of screentime before moving on to an entirely different side of the world, with a new cast and a completely different civilization, going from primitive swamplands to medieval castles and steampunk futures in the span of 90 minutes. There is very little in terms of actual plot or pathos, but that’s not why you watch this film.

Where The Spine of Night really shines is during the hard-hitting, bone-crushing fight scenes. The use of rotoscoping adds a fidelity to the movement and a sense of weight that is enormously more difficult to replicate in traditional (or even 3D) animation, especially when you’re working with such as small team as Gelatt and Galen King, who spent over seven years working on the effort.

A character being stabbed in the chest looks absolutely gnarly, a club bludgeoning a character’s head hits with harder than any live-action punch ever could, and seeing a film so realistically capture the human body only to then smash it into pieces is absolutely thrilling, perfectly capturing the feeling of watching Fire and Ice, or Ralph Bakshi’s The Lord of the Rings.

But it’s not perfect. Despite an impressive cast of genre stars, it’s disappointing how disjointed the voice direction is. It’s one thing to only have one character (Betty Gabriel’s) really resemble their voice performer, but pretty much every performance other than Richard E. Grant and Lucy Lawless’ is toned-down and restrained, which results in the cast kind of just blending together into an indistinguishable and unremarkable grey mush. This is especially disappointing when it comes to Patton Oswalt’s power hungry prince, which almost reaches the point of being drowsy despite Oswalt’s extensive and acclaimed career as a voice actor.

Then there’s are the drawbacks in the use of rotoscope itself. Due to the process of tracing live-action footage onto animation cels, shadow detailing gets lost, but likely due to the small production team behind The Spine of Night, the film’s solid coloring and lack of shadows in its linework make for a muddled 2D experience where the characters feel flattened and completely detached from the (absolutely stunning) background art. Even if the action is given enough care to feel weighted and realistic, the jarring separation between the background and the foreground of the frames takes away from the experience, resulting in something more akin an arcade game like Dragon’s Lair than Fire and Ice.

The Spine of Night serves as an entertaining, action-heavy, gnarly throwback to the hyper-violent, high-fantasy rotoscoped animation of the 1980s that nevertheless suffers from a small production, muddled voice directing, and the usual problems of the animation technique. Will this herald a return of rotoscope fantasy epics? Probably not, but it will certainly remind you why, for a brief moment in time, it seemed like rotoscoped fantasy animation could change the game. 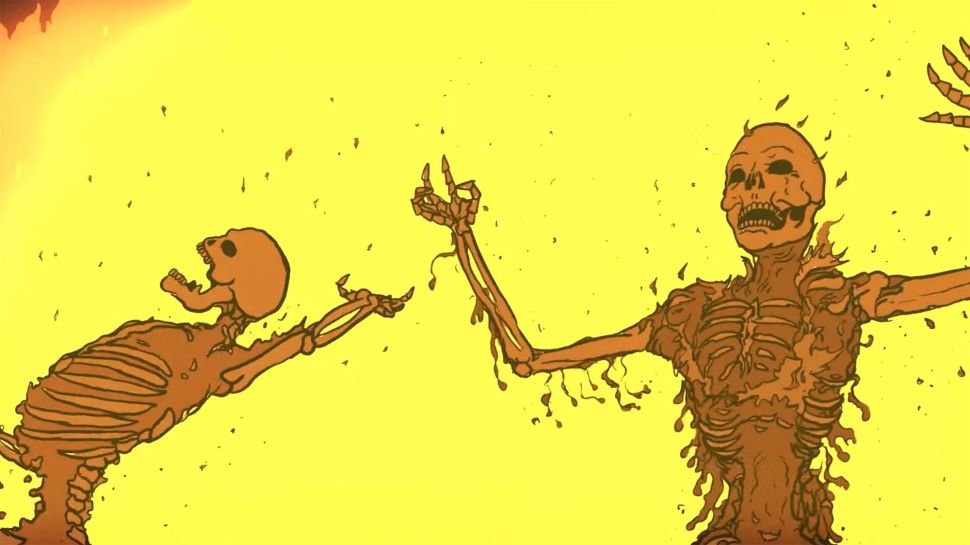