Superman doesn’t just leap tall buildings in a single bound, he carries the weight of history upon his broad shoulders. He is America’s most iconic mythological figure. His creation in 1938 embodied the hopes and ideals of a nation on the verge of World War II. Christopher Reeve’s blockbuster hero invented the cinematic genre that now supports every facet of Hollywood. The Y2K animated series reintroduced the character to an entirely new generation of fans. Smallville was the first live-action TV love of a young couch potato who would go on to cover entertainment for Observer. In every instance, Superman was forced to do battle with not only the villains and crooks of his own stories but the sky-high expectations of the audiences that followed.

As someone who has largely disliked The CW’s Arrowverse, my expectations for Tyler Hoechlin and Bitsie Tulloch’s Superman & Lois were less than favorable. But after two episodes, I find myself drawn to a host of unexpected positives while still chewing on a few negatives. Together, they form the tapestry of what is quickly becoming a far more compelling and mature series than I would have ever imagined, but one not without its flaws.

*Warning: Spoilers for the first two episodes of Superman & Lois*

What is immediately appealing about Superman & Lois is that it is not yet another origin story. We’ve seen the murder of Bruce Wayne’s parents and been hit over the head with Spider-Man’s great power, great responsibility spiel so many times that we can’t help but groan. The same goes for baby Kal-El rocketing off to earth and Jonathan Kent’s untimely death putting him on his life’s path. The show trusts that the audience knows what’s what.

Kal-El has always been treated as the last son of Krypton, a truly isolated individual that represents the end of a planetary lineage. But with a focus on his kids, the show becomes about the legacy and continuation of an entire people. That’s the kind of mental bolognese I want to noodle on. This gives Superman & Lois an operatic Star Wars parallel with a son presented with a new destiny. At the same time, there’s also the reluctancy of destiny that feels a bit like a proto-superhero film Unbreakable. The push and pull between two worlds, the sacrifice between what one wants to do and what one needs to do. The very idea that Krypton still clings to life in the form of Jordan Kent (named after Jor-El) allows an entire planet’s ending to still be written. There’s power in that idea.

By focusing on the Kent family, Superman & Lois also feels more like a human story than a Superman story. That’s one element I greatly enjoyed in Superman Returns, which was more about Clark’s true self and not as concerned with the symbol he represents to the world or the enemies he must overcome. That film revolved around a man becoming a father, one of the most relatable stories in life. Superman & Lois gets to continue that thread with high school-aged children, which sets up a natural progression of the themes and messages that originated with Clark’s relationship with his own father. The idea is that parents are here to prepare their children for the real world, passing on their strengths and weaknesses. Now, it’s Clark’s turn to assume the role that initially shaped him into earth’s champion.

Of course, there can be no Superman without Lex Luthor. Normally, the balding genius is a captain of industry, a criminal mastermind entrepreneur. Here, we’ve only been given brief snippets of Wolé Parks’ “Captain Luthor,” who zooms around in a super suit beating the ever-loving hell out of Supes and stabbing him with Kryptonite knives. It’s hinted that this militant Luthor hails from a different world, dimension, or reality (more on that in a bit).

Batman and Superman (along with their roster of accompanying characters) have been the most represented superheroes across comics, animation and live-action over the last eight decades. We’ve been bombarded by so many iterations of the character that even die-hards would be forgiven for becoming a bit jaded and blasé. So to reinvigorate interest, I’m in full support of reimagining the characters. Stretching their backstories, refurbishing their looks, providing new perspectives—it all helps to split the difference between homage and innovation. Thus far, I’m on board with how Superman & Lois is handling this version of the Man of Steel’s archnemesis because it’s a fresh take.

Luthor is also the main driver of Superman & Lois‘ other big strength: action. Game of Thrones and The Mandalorian spoiled TV fans into believing every small screen tale will have blockbuster visual effects and action. But the reality is that TV is often a noticeable step down from the big screen. Even with that understanding, Superman & Lois has mostly impressed in this department early on.

In Superman & Lois, the family moves from Metropolis to Smallville after Clark has been laid off, his mother has passed away, and Jordan begins exhibiting superpowers. But this left Lois in a difficult position as the “world’s most famous journalist” still employed by the Daily Planet. The story structure felt like it was screwing over a Pulitzer Prize winner to service her husband. But the show smartly recognized this and validated those feelings in a conversation between Lois and her son Jonathan about the toll their move to Smallville has taken on them both.

Now, Lois has quit the Daily Planet, which has been purchased by shady businessman Morgan Edge. She begins working for The Smallville Gazette to bring Edge down despite the good he appears to be doing for the economically depressed Smallville on the surface.

Outside of Margot Kidder and Amy Adams’ Lois Lanes, the attempts to focus on the main character’s side hustles often fall flat. Kara’s work at CatCo Worldwide Media in Supergirl was a go-nowhere B-plot; Barry’s forensics day job shenanigans is where The Flash often workshops its ho-hum comic relief to little effect. But I’m willing to give Lois’ subplot a chance. She’s fighting in a new journalistic arena on her own terms. I’d like to see her go a couple of rounds with the powerful status quo.

Superman may be faster than a speeding bullet, but his show can’t always escape the pitfalls of TV storytelling. With two 15-year-old sons as main characters, Superman & Lois often defaults to angsty teenage drama. It can be emotional outbursts tailor-made for heightened television conflict as opposed to the more genuine and authentic hormonal tidal waves you remember as a teenager. Angsty teenage drama is almost always a distracting subplot that never approximates the intrigue of the main stories. It’s a mistake Designated Survivor and Homeland have made in recent years. More often than not, these storylines end up sputtering so you’ll have to excuse us if we’re not 100% invested in Jonathan’s quest to become his high school’s starting quarterback or Jordan’s will they-won’t they romance.

This is a microcosm of The CW and Arrowverse’s tone and style. The network’s target demographic is 18-34 year olds. There’s an inherent campiness to the Arrowverse that courses through its many series, an exaggerated and affected way of doing things. There’s little room for emotional or thematic nuance. Our heroes and villains are written as thin as the original comic book paper we used to read them on. Black or white, no room for grey. It’s too early to tell if that will always be the case for Superman & Lois, but thin layers of the Arrowverse’s flavor can crop up to the show’s detriment.

Finally, my main concern with Superman & Lois is the gravitational center it’s setting up for its story. As I mentioned, I enjoy reimagined versions of familiar characters. But this new Lex Luthor seemingly comes from a world with an evil black-suited Superman who is a big fan of murder.

Between The Flash‘s Season 3 premiere adaptation of timeline-rewriting “Flashpoint Paradox” and the annual Arrowverse crossovers, this franchise has relied far too much on the idea of the multiverse. With DC Films adopting the concept in 2022’s The Flash and beyond, it’s time to let the big screen be the center-point for that angle for the foreseeable future.

Superman & Lois already hooked me with its fresh takes on the classics, its family-focused narrative, and the thematic potential it packs as a result. Legacy and generational history, the life cycle of children becoming parents, the struggles of an American family, corruption masked as altruism. This is the good stuff already embedded in the show’s DNA. What Superman & Lois absolutely doesn’t need is a deus ex machina redux plot mechanic that’s already an overused ploy in its sister shows. 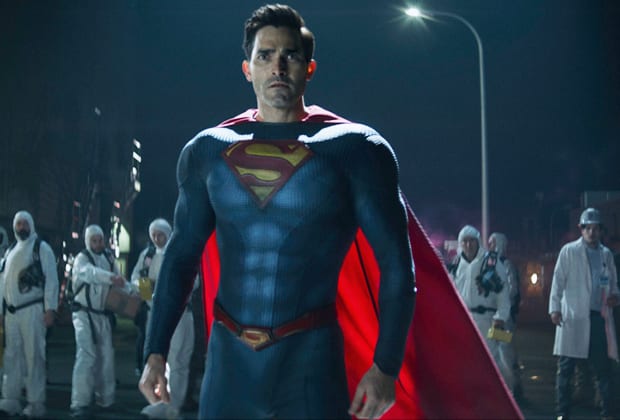