Science fiction epic The Expanse has always been good, but during its fifth and latest season, which aired on Amazon Prime this winter, more people seemed to notice just how good it is. The series’s penultimate season is rated 100% fresh on Rotten Tomatoes, with critics commending the actors’ strong performances and the showrunners’ attempt to accurately portray a not-so-distant future in which humans have colonized the Solar System. Based on novels of the same name by James S.A. Corey, the joint pseudonym of authors Daniel Abraham and Ty Franck, The Expanse is singular among recent sci-fi TV for its realism. From the ecological collapse that will push people off of Earth, to space travel (warp drive is a bunch of hooey), to the political dynamics of an interplanetary human society, The Expanse tries to get the details right. And more often than not, it succeeds.

But the show’s commitment to accuracy isn’t limited to its scientific elements, like its realistic depiction of people’s movements in zero-g, and the series has garnered acclaim for more than just its nuanced representation of our hypothetical sociopolitical future. In season five, The Expanse heavily explores themes of trauma, abuse, and intimate partner violence, and more so than many prestige dramas grappling with these topics, the sci-fi series does them justice.

Season five of The Expanse picks up where season four left off—with asteroids hurtling toward an unsuspecting Earth. Sent by Belter freedom-fighter Marco Inaros (Keon Alexander), three rocks impact the planet, killing millions of people and injuring and displacing millions more. While the governments of Earth, Mars, and the Belt scramble to deal with the fallout from this terrorist attack, smaller-scale dramas unfold across the Solar System. The Rocinante is docked for long-term repairs, and the crew are free to pursue personal missions. Among them are Naomi Nagata (Dominique Tipper) and Amos Burton (Wes Chatham), who, in parallel journeys, revisit their past trauma.

“Everybody there is carrying the weight of their history, and some of those histories are terrible.”

While viewers are offered glimpses of the two characters’ backstories in previous seasons of the show, the most recent episodes hold nothing back. In flashback scenes on Earth, the audience meets young Amos, who’s taken in by a flawed, but good-intentioned woman after living on the street. It’s implied that, in addition to joining a gang to survive, he was forced into sex work as a child, illuminating reasons for Amos’s violent tendencies and emotional detachment.

Across the Solar System in the Belt, Naomi searches for Filip (Jasai Chase Owens), the son she was forced to leave, only to be kidnapped by him and reunited with his father—her abuser—Marco and her old comrades. Viewers learn that she was captivated by Marco’s charisma and persuaded to join the Outer Planets Alliance (OPA), a radical movement for Belters’ liberation, when she was young. After giving birth to Filip and growing wary of the OPA’s violent tactics, she attempted to leave. In a ploy to keep her from escaping, Marco hid Filip from Naomi, nearly driving her to suicide. Instead, she left, starting life anew. Held captive aboard Marco’s ship in the present day, Naomi is once again forced to make the harrowing choice to leave Filip, who has been poisoned against his mother by his father, victimized himself by Marco’s emotional abuse.

Can we talk about #TheExpanse having more than one survivor of sexual violence and abuse as a main character?? And that one of them is a white cis man while the other is a woman of color? And they’re both nuanced humans living with trauma, and not reduced to a strong/weak binary?

Sex and culture critic Ella Dawson praises these plotlines in a tweet: “Can we talk about #TheExpanse having more than one survivor of sexual violence and abuse as a main character??” In a phone conversation, Abraham and Franck explain that they drew from their personal experiences—with trauma and therapy—when crafting these stories.

“I have certainly been in relationships that were not physically, but emotionally abusive,” Abraham says. “And I spent a lot of time kind of unspooling that, and that informs what I do now.”

Franck connects the themes in season five to his childhood in a fundamentalist, conservative religious group, in which isolation and control played large roles. Abraham notes that it was important to them to make clear in The Expanse that while abuse survivors are impacted by the trauma they’ve endured, they aren’t lessened by it. “Everybody there is carrying the weight of their history, and some of those histories are terrible.”

Speaking to their decision to center abuse survivors in both the novels and on the show, Abraham and Franck also emphasize that, unfortunately, abuse is common. (So common, that allegations of sexual harassment and assault against castmember Cas Anvar necessitated writing the death of his character, Alex Kamal, into the show’s season five finale.) According to the National Coalition Against Domestic Violence, in the US, “one in four women and one in nine men experience severe intimate partner physical violence.” National Children’s Alliance estimates that roughly 700,000 children are abused in America each year. Amos, a white man from Earth, grew up impoverished in Baltimore. Naomi, a Black woman from the Belt, was a successful engineer before meeting Marco. Their backgrounds could not be more different, but as the writers illustrate in this season of The Expanse, trauma is universal.

Yet the show is groundbreaking not simply because it represents trauma, but because that representation is diverse and empathetic. (Abraham and Franck praise the cast’s performance, noting that much of the stories’ nuance is owed to them.) Particularly in Naomi’s case, the showrunners make clear that they understand how isolation and power play roles in abuse.

In an email, Tipper explains she did a lot of research into radicalization to prepare for her portrayal of Naomi in season five. As the leader of an extremist faction of Belters fighting by any means necessary for independence, Marco is what she calls a “revolutionary narcissist,” and like so many abusers, he is smart and charismatic—capable of winning thousands to his cause. But his “nobility and righteousness” are what Abraham calls a “cloak” for his abuse. Throughout season five, the audience sees Filip wrestle with the messages Marco has fed him about Naomi: that she’s a bad mother, a deserter, someone who’s weak-willed and unable to make hard choices to fight for her people or her family. His manipulation and gaslighting work.

Marco Inaros is every dude who ever learned to ape the language of feminism and race and gender studies specifically as a means to hit on women and manipulate real, legitimate grievances into a play to increase their own power.#TheExpanse

Abraham paraphrases a tweet that likens Marco to men who learn the language of feminism and social justice only to use it to control others and increase their own power. He asserts that just because Marco is “the underdog, doesn’t mean he’s the good guy. He is perfectly capable of taking an absolutely legitimate cause, an absolutely genuine injustice, and riding that in the direction that he wants for greater aggrandizement.”

In a devastating scene indicative of the influence Marco wields, he tells Naomi about his plan to lure her chosen family, the crew of the Rocinante, to their deaths using her as bait. She pleads with her former comrade and friend Cyn (Brent Sexton), who failed to stop Marco’s abuse in the past and continues to enable him in the present. She hopes to reason with Filip, whom she’s tried, but failed to release from his father’s grasp. Her son slaps her. As she’s dragged away by guards, she screams at Marco, sobbing, “I fucking hate you! I hate you.” This is the impetus for her second escape.

Tipper reveals this line was improvised. Naomi “really thought she was making some breakthroughs with Filip and Cyn, and it was so brutally snatched away by Marco in that moment,” she writes. “He had orchestrated this grand spectacle of just how much she had failed and just how much she is not in control.” Tipper remembers reading somewhere that “your son can be your abuser.” The pivotal moment, she writes, is, “I think unfortunately, once Filip strikes her, that rings devastatingly true for Naomi, and she knows it’s time to go.”

Viewers first learn Naomi has a son in season two of The Expanse. In a conversation with her crewmate Prax (Terry Chen) who is searching the Solar System for his daughter, she reveals her history and explains it took her a very long time to understand abandoning Filip wasn’t her fault. This powerful sentiment is one the show reaffirms over and over again: The choices that survivors make in order to cope are, in Franck’s words, “legitimate.”

As viewers see, leaving one’s abuser, especially when children are involved, is so much more complicated than simply walking out the door; an abuser’s pull is powerful.

In both my conversation with Abraham and Franck and my email exchange with Tipper, we discuss the discourse surrounding the question abuse survivors are most often asked: “If the situation is so bad, why don’t you just leave?” In The Expanse, both Naomi and Amos eventually escape their abuse, but as viewers see, leaving one’s abuser, especially when children are involved, is so much more complicated than simply walking out the door; an abuser’s pull is powerful.

“I think we always need to remember that often in abusive relationships it’s not all bad,” Tipper asserts. “Also there are so many reasons why someone may not leave, whether it be economical or situational or threat of violence/death, and sometimes staying can be the lesser evil.” Speaking from his own experience leaving a cult, Franck comments, “It’s easy from the outside to go, ‘Well, you should just leave.’ From the inside, you’re looking at abandoning what you consider to be the entirety of your life… There’s no one way out. Just surviving, no matter what path you choose, is an accomplishment. That’s a victory.”

Historically, hard science fiction has used futuristic settings as backdrops over which to tell human stories—in all their pain and complexity. The Expanse is no exception, and its most recent season is proof that everyone’s favorite space opera is also one of the best shows about abuse on TV.

The Expanse is available to stream on Amazon Prime Video. 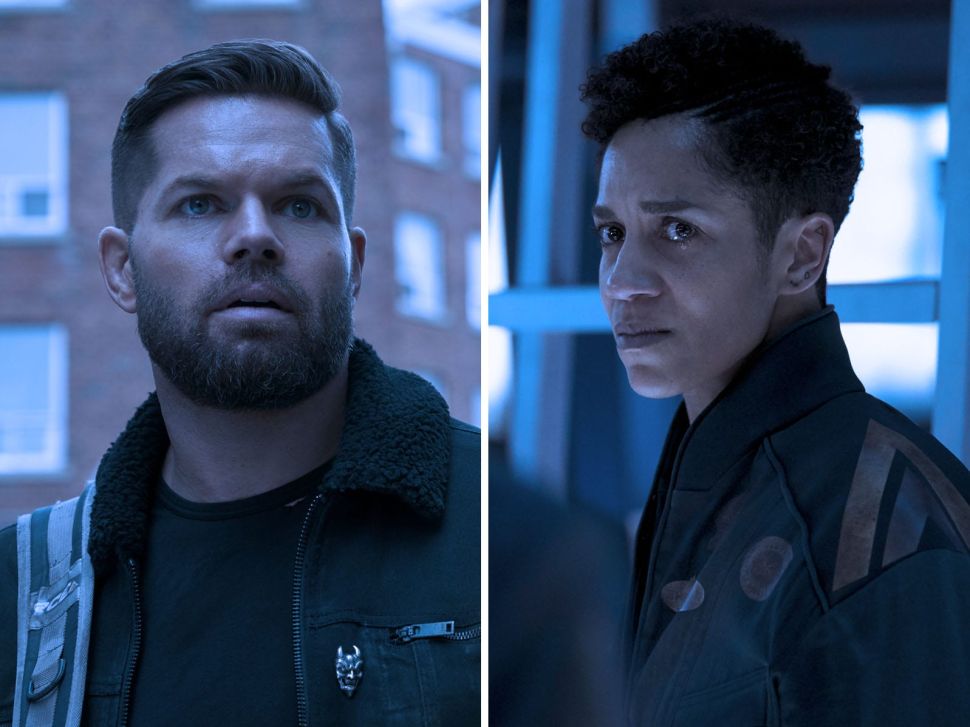