Let’s get the truth out of the way upfront: Sam Wilson (Anthony Mackie) and Bucky Barnes (Sebastian Stan) have rarely been compelling characters outside of their connections to Marvel’s big blue beloved boy scout Steve Rogers/Captain America (Chris Evans). In Captain America: The First Avenger, Bucky exists solely to serve as a personal loss for his more famous best friend. In The Winter Soldier, Sam becomes quip-tastic support for Steve’s mission to save Bucky. Their arcs have been defined by the impact they had on Steve. Like Wanda Maximoff (Elizabeth Olsen) and Vision (Paul Bettany), they exist on the periphery. Yet also like Wanda and Vision, they are poised to be completely reinvented for the better thanks to Disney+.

Taking place a few months after the events of Avengers: Endgame, The Falcon and The Winter Soldier sees Sam and Bucky attempting to re-adjust to life after returning from five years of oblivion following Thanos’ Snap. But picking up where their lives were paused all that time ago isn’t so simple, particularly without Steve serving as their emotional anchor. The show reveals that Captain America’s disappearance has not been explained to the public, sparking hilarious conspiracy theories such as secret moon bases. But his absence has created a void both in our national morale and in the lives of his two best friends left behind.

The Falcon and The Winter Soldier‘s pilot, the only episode made available to critics, does a surprisingly stellar job of honing in on the deeply personal central conflicts of both lead characters while seamlessly setting up the larger crux of the season. Showrunner Malcolm Spellman (Empire) makes it a point to elevate both figures from their previous stations in the crowded big screen adventures by carving out individual identities. Each is confronted with well-founded issues that plague them both internally and in the context of their places in society.

The pilot is deeply invested in the characters and establishes powerful through lines for the remaining five episodes. We’re given insight into their states of mind, where they’re at in their tumultuous lives after returning from the Blip, and how they’re attempting to reckon with their pasts and move forward in an infinitely more complicated world.

Sam has relinquished the Captain America shield, bequeathed to him by Steve in Endgame, to the Smithsonian because he still feels that it belongs to someone else. “We need new heroes. Ones suited for the times we’re in. Symbols are nothing without the women and men that give them meaning,” he says at the ceremony. The weight of legacy and future expectation weigh heavily on his good-natured soul.

Bucky is plagued by PTSD flashbacks and nightmares to his time as the Winter Soldier. He’s in court-mandated therapy as a condition of his pardon and is attempting to make amends for his past transgressions as a brainwashed assassin for Hydra (comics, amirite?). But he’s also unable to open himself up, believing he isn’t deserving of a second chance or even useful without a battle to fight. He is a man out of time, and he yearns for peace, but doesn’t know what such freedom even looks like.

The Falcon and The Winter Soldier also breaks relatively new ground for Marvel with its approach to race. In one scene where Sam is angling for a bank loan, he’s treated more like a superstar athlete who exists as a product for the masses and less as an individual with his own agency. The bank employee only sees what Falcon represents to him, and not the real person underneath. He also largely ignores Sam’s sister Sarah Wilson (Adepero Oduye), who is in the sit-down meeting with them. This extends to the void left by Captain America’s disappearance and whom the government chooses to fill and not fill that role moving forward. The messaging feels painfully clear and representative of how we commodify black celebrities for our own use and then cast them aside at our own inconvenience.

For both, the script work and character texture then enhances the subsequent action. John Wick director Chad Stahelski told Observer last year that action isn’t just cool visual effects and stunts, but “an extension of the themes and messages of a film and it creates memorable connections for the audience.” Here, the action sequences are more personal because they’re tied to what our heroes are going through, particularly for Bucky as he fights against the past. It isn’t just CGI punch-em-ups for the sake of action, its more methodically character-specific.

That’s not to say this first episode is lacking in that department. It opens with a thrilling aerial sequence that puts every last drop of the show’s mammoth budget on the screen. If some viewers found WandaVision‘s to be too opaque (not us!), The Falcon and The Winter Soldier intentionally starts with a bang.

Once again, Marvel is proving that it can leverage the Disney+ platform to recreate secondary characters as lead protagonists with backstories every bit as rich and compelling as Captain America and Iron Man. At the same time, The Falcon and the Winter Soldier appears to tackle new, weighty issues while feeling nothing like its streaming predecessor WandaVision.

The Falcon and the Winter Soldier premieres on Disney+ tomorrow, March 19. 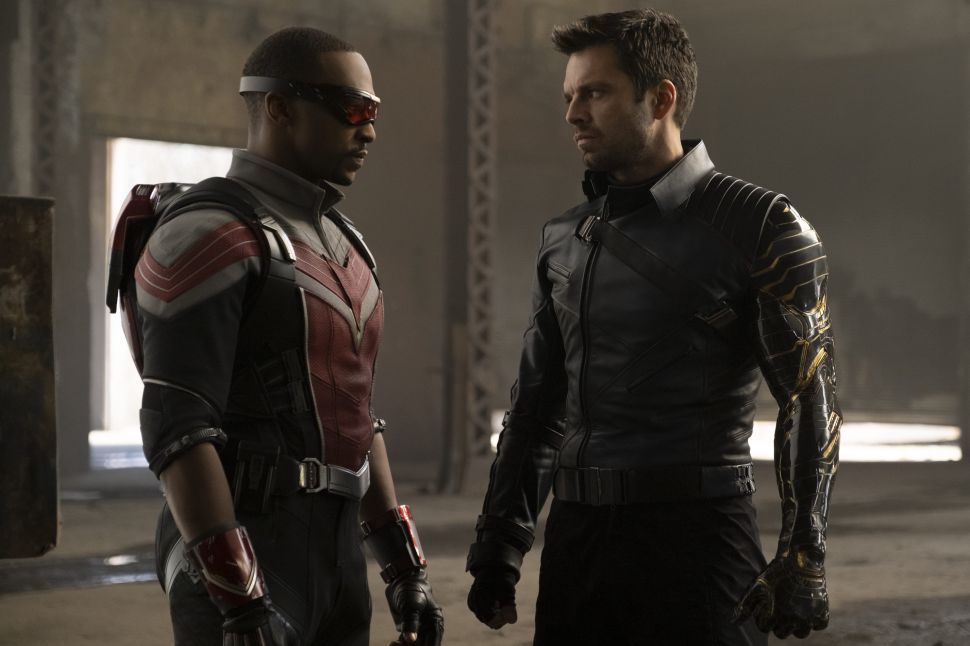