In its final episode, Marvel’s WandaVision lived up to director Matt Shakman’s warning that none of our fan theories would matter in the end. All of our rabid speculation, conspiratorial dot-connecting, and over-obsessive sleuthing held the same effect as bullets bouncing off Hulk. But do not despair. WandaVision, nor any TV series, is constructed to live up to the very specific idea fans build up in their heads. That doesn’t show up doesn’t mean the past nine weeks of communal monoculture viewing and conversation are wiped away like the memories of Westview citizens. We’ve more than enjoyed the ride and Marvel has proven that Disney+ is a platform ripe with opportunities for the MCU.

But, in all fairness, that doesn’t mean WandaVision necessarily stuck the landing. While “The Series Finale” elicited some well-earned tears with an emotional core that remained sturdy throughout the show’s run, the final episode still teetered as a generic CGI light show. Let’s dive into what worked and what didn’t.

The climactic showdown between Agatha Harkness and Wanda was a bit of a letdown, complete with clunky dialogue that feels more like an episode of Agents of SHIELD with flashier names. It’s rushed, over-reliant on colorful energy beams and thinly sketched at times.

Agatha is a centuries-old witch with immense power and knowledge, an advantage she points out to Wanda, who has never truly understood the root nor the extent of her magical abilities. Her endgame is to absorb Wanda’s Scarlet Witch powers for herself.

(Side Note: We understand she needed to play it low key in Westview as she gathered more information on Wanda. It’s also reasonable that she didn’t come to the firm conclusion that Wanda was indeed the Scarlet Witch until recently. But if siphoning her magical gifts was the ultimate goal, it would have been far easier to do it while she was still in incognito mode rather than after she’s kidnapped Wanda’s kids and revealed her dastardly plan.)

Agatha reveals that there’s an entire chapter in the Darkhold book devoted to the Scarlet Witch, who we learn is stronger even than the Sorcerer Supreme (aka Doctor Strange). The prophecy connected to the mythical power foretells of an apocalyptic force that will destroy the world. Basically, Wanda is a ticking time bomb of destruction much like the Phoenix Force from X-Men. Agatha may have been greedily thirsting for Wanda’s power, but when our Avenger fully accepts and embodies the Scarlet Witch mantle, Agatha seems well and truly terrified. We now have our major carry-over plot point for Doctor Strange in the Multiverse of Madness.

During their battle, Agatha begins to free the minds of Westview citizens from Wanda’s spell. Dottie (real name: Sarah) reveals her child has been locked away in their room throughout Wanda’s Westview vacation. Others beg for death as Wanda’s grief is poisoning them. It’s yet another dark and gut-wrenching display of the toll this illusion has played on them. Wanda is the inciting villain of the story, and for the episode to later try and reposition her actions is laughably misguided.

Though Wanda may not be a formally trained witch, her powers of perception are strong. She turns the tables on Agatha by erecting runes on the Hex walls that prevent her adversary from using her magic, just as Agatha did to her in that spooky dungeon basement. She then doles out the ultimate punishment by sentencing Agatha to live as nosy neighbor Agnes. “Okie dokie,” Kathryn Hahn’s Agnes/Agatha says as she’s trapped within herself (until, of course, Wanda needs a magic lesson sometime in the future. Hahn will likely be seen again at some point.)

All in all, it was a bit of an anticlimactic resolution. WandaVision‘s writing has been top notch all season, but resorting to prophecy to simultaneously conclude and propel your story forward feels a bit like cheating to navigate a maze. There was no parallel between the action and the emotional thrust of the series.

It’s already become clear to Westview Vision that he is not the genuine article. So when he comes across White Vision teased in last week’s post-credits scene, he realizes this must be the remnants of the true blue version. The two tussle for a bit in a solid round of fisticuffs befitting WandaVision‘s sizable budget. But it is Westview Vision who has been living with his family all this time, learning more about humanity, developing greater abstract thought while White Vision was only recently brought online. This enables him to reason with his counterpart through intellect and empathy, showcasing his development over the last nine episodes.

Throughout the show, Westview Vision has been unlocking citizens’ true subconsciousnesses in order to gain answers. This may have also been a tidbit of foreshadows as he’s able to do the same for White Vision, restoring all of his memories, in order to set him free. This means that the Vision we came to know in Age of Ultron all the way through Infinity War is indeed “alive” once more. But sorting through the messy tangle of his life, his dual deaths, and the complicated situation with Wanda is a lot to take on at once. Then White Vision flies away. That’s a plot point that will surely surface in a future MCU project as he is not seen for the rest of the episode.

Audiences were understandably thrilled and perplexed when Pietro (Quicksilver) returned in Episode 5, only to be played by Evan Peters (who portrays the character in Fox’s X-Men franchise) rather than Aaron Taylor-Johnson, who portrayed the MCU version in Age of Ultron. In the finale, Pietro is holding Monica hostage in his home. But you can’t keep a fledgling superhero down for long. Monica discovers that Fake Pietro is actually an actor named Ralph Bohner who Agatha provided a charmed necklace to give him abilities. In the end, Evan Peters’ casting was just a ruse to play with Marvel fans.

It’s perfectly okay that Pietro’s existence didn’t match up with fan theories. Again, audiences don’t have to be right for television to be good. But why intentionally run subterfuge against your own fanbase and invite a bombardment of speculation by casting Peters only to pull the rug out from under us? Why not get a completely different actor to play the part if that was your end game? He and Wanda shared an emotional conversation about their childhood trauma that helped color in her past. Now it feels like an unnecessary roundabout and a waste of energy that ultimately renders a major mid-season plot point meaningless, thus negating the weight of the narrative. Talk about cutting off the nose to spite the face.

After Monica turns the tables on “Fietro,” she rushes out to the town square to help the Maximoff family fight off incoming SWORD forces. Hayward has been a pompous jerk this entire season, but here he doesn’t hesitate to empty an entire clip at Wanda’s kids. My man, take it down several notches. Fortunately, Monica is there to absorb the bullets into her body and eject them innocuously out the other side. Her powers are still quite nebulous at this point, so we’re going to need some more explanation on that.

With all threats neutralized, Wanda frees the citizens of Westview. Knowing that she must take down the Hex, and that Vision and her children cannot exist without it, the family return home for a tearful goodbye. The loving parents tuck their children into bed and Wanda thanks them for letting her be their Mom. In the strongest scene of the finale, and one of the strongest of the entire show, Wanda and Vision share a precious last few moments together before the Hex collapses and he disappears for good.

Wanda calls Vision a creation of her “sadness and hope” and “mostly my love,” and shut up I’m not crying, you’re crying. After nine episodes, it’s finally clear what WandaVision truly is: a love story. This sentiment is well-earned and it’s given the space to breathe that it would never have received on the big screen. “So long darling,” Vision says as he dissolves into a beautiful pattern of golden essence. To discover our life’s purpose, we need only go so far as to the one’s we love.

The Hex is gone and Westview is restored to its previous form. Wanda walks through town, earning only glares from the citizens and not the violent mob she kind of deserves. And then Monica offers the episode’s worst sentiment: “They’ll never know what you sacrificed for them,” she tells Wanda. Are you kidding me?

This attempt to reframe Wanda’s immoral and criminal actions is borderline offensive and surprisingly tone deaf for a series that has been so deft at navigating grey areas. For weeks, Wanda imprisoned Westview’s 3,982 citizens, infected them with her pain, forced them to live alternate lives and locked away their children. Her grief and trauma are worthy of sympathy. But to absolve her in this specific moment, in the direct aftermath of the cataclysm she’s responsible for, feels like madness. (It may also be one of the episode’s breadcrumbs leading to Doctor Strange in the Multiverse of Madness.)

Monica is invited for a private chat with an agent who reveals herself to be a shapeshifting alien Skrull (Talos’ daughter?). “I was sent by an old friend of your mother’s. He heard you’d been grounded. He’d like to meet you.” Monica is going to space! We’ll see her in Captain Marvel 2 and perhaps Samuel L. Jackson’s Secret Invasion series.

In the other post-credit scene, Wanda has gone full lumberjack Dexter Morgan by isolating herself in a cabin in the remote woods. At first, she’s enjoying a nice cup of coffee on her porch but then…a second Wanda is studying the Darkhold in the back. She’s in full Scarlet Witch mode looking pretty decked out in evil forces when she suddenly hears her children crying out for help. And that’s where we’ll likely pick back up with her in Doctor Strange 2.

WandaVision is available to stream in full on Disney+. 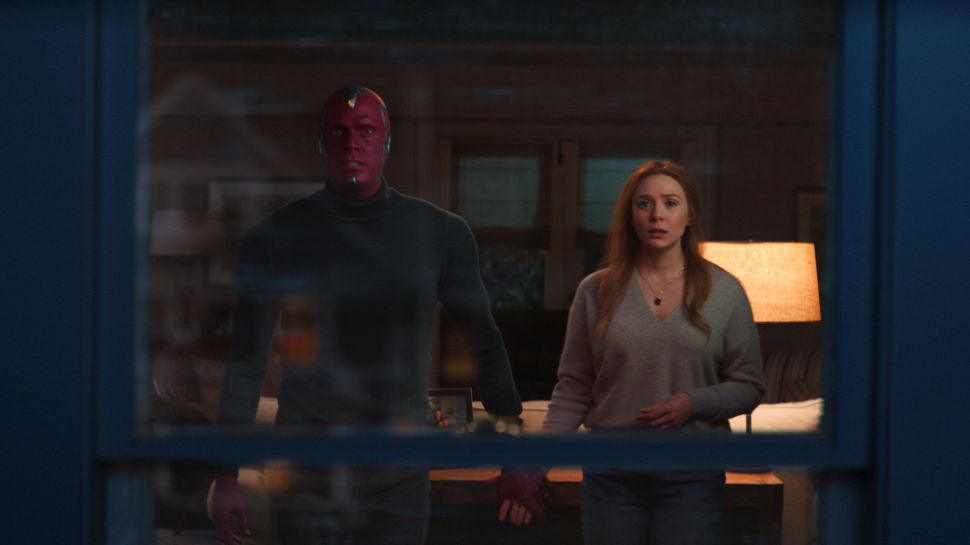