“That accent really comes and goes, doesn’t it?” the evil witch Agnes Harkness (Kathryn Hahn) sneers at Wanda Maximoff in one of the later episodes of Marvel’s hit series Wandavision. The show has mostly been discussed as an investigation of grief and loss. But, as Agnes suggests, it’s also, at least waveringly, about immigration, assimilation and an American suburban sitcom dream which may or may not be a nightmare.

As you’re probably aware unless you’ve been hiding in some magically sealed off alternate reality, WandaVision is structured initially as a sitcom pastiche. The first few episodes show Wanda (Elizabeth Olsen), a witch, and her husband the sentient android Vision (Paul Bettany) living a preternaturally wholesome life in the suburbs, complete with laugh-track. There are copious references to television chestnuts past, from I Dream of Jeanie in early episodes to Family Ties and Malcolm in the Middle later on.

Eventually we learn that the sitcom backdrop is all a spell created by Wanda as a reaction to her grief. In MCU films over the years, Wanda’s beloved brother Pietro and then her lover the Vision both died. Wanda’s love of old American television is explained in the penultimate episode through a flashback. Growing up in a war torn Eastern European country, her family would watch sitcoms to bond and learn English. In a perhaps too-on-the-nose twist, we see her house actually blown up and her parents killed while the family was watching an episode of The Dick Van Dyke Show.

Westview, then, is essentially an immigrant’s vision of an idyllic America, where the streets are paved, not with gold, but with perfect lawns and nuclear families. Wanda’s Westview—a play on the names of Wanda and Vision but also “TV”—is friendly, clean, and full of neighborly cheer. On a bad day, your husband might get gum caught in his clockwork internal mechanisms and spend a few hours acting very drunk. That’s as bad as things get.

The show’s worries about assimilation are out in the open. But they’re also garbled.

Scrubbed normality and perfection have an artificial uncanny valley eeriness, and Wanda’s Westview utopia is ominous in part precisely because it’s so utopian. Wanda and Vision, witch and robot, stick out amidst all the aggressive mundanity. They have to constantly be vigilant to make sure no one sees Wanda using magic or catches Vision with his natural purple face before he can turn it flesh-toned. Their machinations to conceal their differences run a thin thread of anxiety through the general contentment of the early episodes. It’s a reminder that part of how you get normality is by forcing everyone who’s different into hiding.

Perhaps the most pointed variation on this theme is in the season finale. A quasi-military organization called SWORD is trying to free Westview from Wanda’s spell; they send a reanimated Vision to destroy her. This Vision is, notably, completely bleached of color, and has lost all memory of his past. America has severed him from his roots and individual history, as America sometimes tries to sever immigrants from theirs, and he has become a white drone, doing the destructive bidding of his programmers.

The show’s worries about assimilation are out in the open. But they’re also garbled. Thanks in part to choices already made in the Marvel Cinematic Universe, Wanda has been carefully distanced from specific, real-world ethnic identity. In her comic-book incarnations, Wanda is often Jewish, or Roma, or both. In the show, she instead hails from the fictional nation of Sokovia. Nonetheless, the Roma background peaks through at odd, unfortunate moments. In a Halloween episode, Wanda dons a “Sokovian fortune teller” outfit for Halloween—a joke that hinges on stereotypes about Roma fortune tellers. WandaVision wants to critique the way outside pressures disappear quietly into sitcoms. But then it reproduces those same pressures by both erasing and stereotyping the ethnic identity of its protagonist.

Even more confusingly, the worst example of enforced conformity in the show isn’t about Americans forcing outsiders to be more like them. It’s Wanda demanding that Americans be more like she wants them to be. Over the course of the series, we learn that the other inhabitants of Westview aren’t just figments of Wanda’s imagination. They’re actual residents of the town, who have been mind-controlled by Wanda to follow her sit-com scripts. Instead of checking on sick relatives, or spending time with their children, the poor people in Wanda’s spell are forced to spend their lives dreaming Wanda’s dreams of grief, waking only to deliver stale straight lines.

Wanda isn’t in control of her powers and doesn’t exactly realize what she’s doing. But nonetheless, this narrative evokes anticommunist Cold War paranoid SF stories like Invasion of the Body Snatchers, or Heinlein’s The Puppet Masters, in which alien hive minds impose their dreaded, drab sameness on American individualism. “There will always be torches and pitchforks for ladies like us Wanda,” Agatha says. This evokes the witch hunts in Salem, in which the townspeople hunted down and murdered those deemed outsiders. But the twist here is that Agatha and Wanda are actually both witches who do evil things. The story isn’t about how marginalized people are persecuted, but about how marginalized people are somehow the most powerful people on earth and bend the good upstanding non-witches to their will.

In “The Series Finale,” Wanda’s Vision and her two twin boys, who actually are purely her creations, have to be destroyed so that the rest of the town can regain their minds. Wanda simultaneously stops being a suburban mom and instead becomes the Scarlet Witch—which means she gets her accent back, her eyes glow, and she is magically garbed in tight red fetishware. We shift genres from sit-com to fantasy horror; Wanda is released from heteronormative sit-com quotidian routine and allowed to be her true goth self. That’s not figured as a triumph, though. It’s presented as loss.

Wanda at times wants to be a normal American suburbanite, whatever that is. And then at other times she wants to be true to a more specific self, whatever that might be—Jew, Roma, woman, weird old witch. The show is torn by a similar uncertainty. Its early, stylized, David Lynchian episodes give way to a more and more standard Marvel narrative, with crossover cameos, super-battles and personal discoveries laid out in clearly marked narrative beats.

In the end, WandaVision didn’t exactly know what it was. That accent comes and goes, perhaps because Wanda is unsure which voice she wants to be hers. 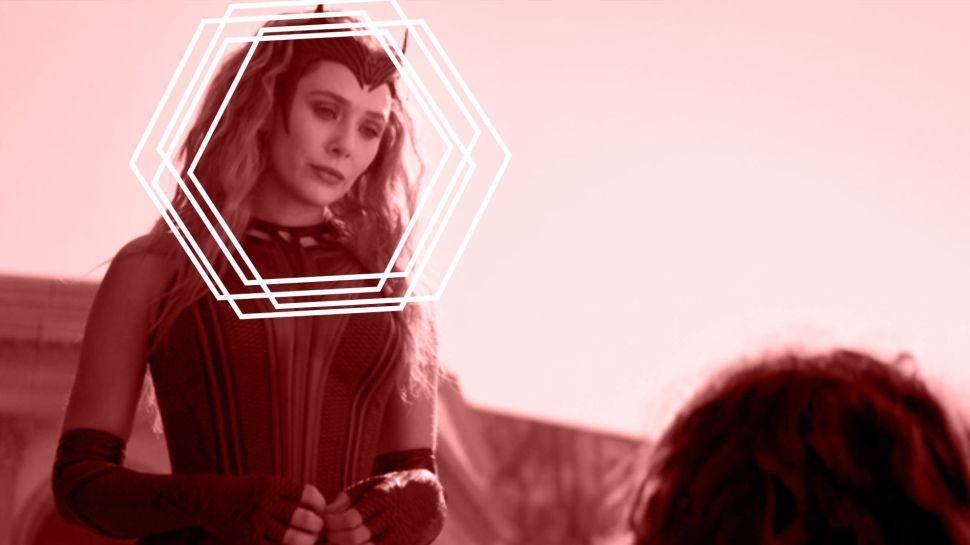