In the early 2010s, when modern-day electric vehicles just started gaining traction in the U.S. and a few pockets in the world, Tesla and an Israeli startup called Better Place proposed a novel concept to solve the issue of long battery-charging times: Instead of re-charging, why not just swap dead batteries out altogether?

It was intriguing, but neither company was able to take the idea any further. Better Place failed to make a viable business out of it and shut down in 2013, while Elon Musk claimed in 2015 that “customers weren’t interested in swapping their batteries.”

But now, as electric vehicle adoption reaches an inflection point and the buildout of charging infrastructure lags behind, battery swap is back in fashion, according to a new crop of startups looking to give the technology another try.

“Today, EVs are back and we have once again learned that for many drivers, plugging in and waiting isn’t a great solution,” Levi Tillemann, a former policy advisor to the U.S. Department of Energy and now head of policy and international outreach at Ample, a San Francisco-based battery swapping company, wrote in a recent op-ed for The Washington Post. “This simple, powerful mode of EV refueling uses robots to physically remove empty batteries and replace them with fully charged batteries—much as you would change the batteries in a flashlight.”

Today, battery swap technology pioneered by Chinese EV companies, most notably Nio, which sells electric cars without batteries and instead charges buyers a monthly subscription fee for battery swap service. Nio is enjoying wild success (and a vote of approval from Wall Street investors). Yet, this battery-as-a-service model has a few shortcomings: those batteries are brand-specific and can’t be used in other EVs, and the swap stations are still too expensive to build.

“We needed a business model that can be profitable without government subsidies in order to achieve long-term viability. I don’t believe relying on subsidies is the right model for EV,” Ample co-founder and president John de Souza told Observer in an interview.

Before its official launch this year, Ample was in stealth mode for seven years, figuring out ways to make a one-size-fits-all battery system and build fully automated swap stations at a reasonable cost. The company’s solution to the first problem is to make modular, Lego brick-like batteries that can be assembled into various sizes and shapes to fit different EVs. Swap stations are prefabricated and can be quickly assembled wherever they’re wanted.

“Our cost of setting up swap stations is comparable to deploying a couple of level 2 chargers,” de Souza explained. “It’s a reasonable cost, which allows us to be profitable after just 20 vehicle uses on a given station.”

Another way to lower cost is by tapping into alternative energy sources such as wind and solar. When not in use, Ample’s battery swap stations can function as energy storage devices to capture solar and wind energy. “Swap stations act as a power buffer. The buffer is built in our design, so it uses renewable energy when it’s available,” de Souza said.

One challenge facing Ample—and battery swap tech overall—is the rapid development of charging methods. As driving range improves and the so-called “fast chargers” become more common, “range anxiety” is not so much of a dealbreaker to consumers as it used to be.

Last month, President Joe Biden unveiled a $2 trillion infrastructure package, which includes a $174 billion budget to upgrade the electric vehicle supply chain and install 500,000 EV fast-charging stations across the country to encourage EV adoption. Such massive spending, as Ample sees it, is neither necessary nor green.

“We don’t see a world in which fast chargers solve these problems,” de Souza said. “If you want to fast charge a car in under five minutes, you’d need a 1 to 2 GigaWatt charger. That’s going to cost millions of dollars.” Let alone the fact that in such chargers power will have to come from the grid, which still heavily relies on natural gas and coal.

Ample currently operates five battery swap stations in the San Francisco Bay Area specifically for Uber drivers. Drivers with supported electric vehicles can exchange a spent battery for a fully charged one in less than 10 minutes. Ample aims to shorten the swap time to under five minutes by the end of 2021.

“A lot of people think of electricity as the new gas. But in reality, the batteries are the new gas. That’s a slightly different way to think about it,” de Souza said. 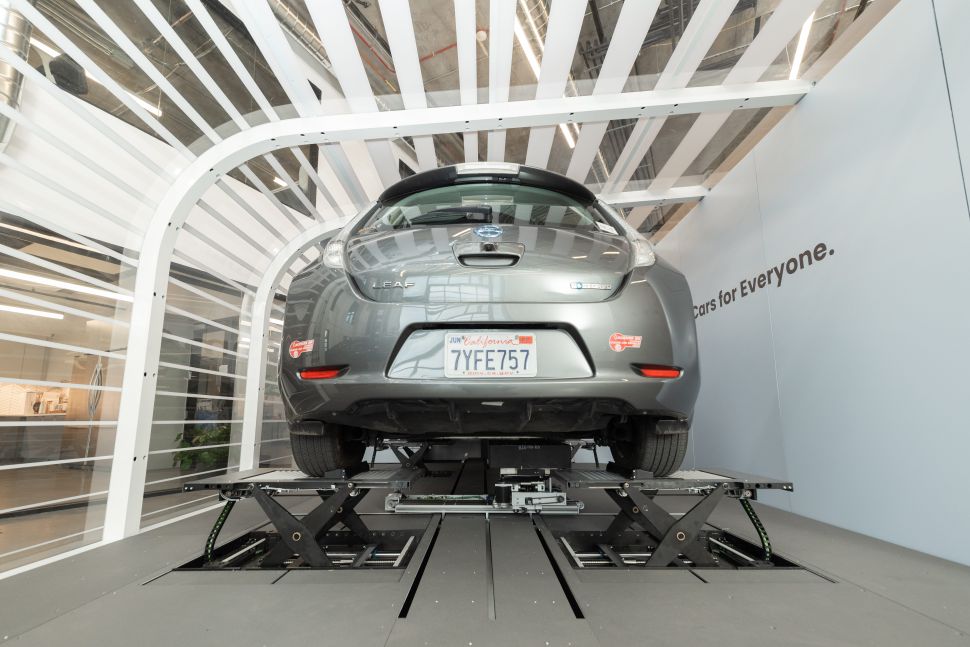