Beau Patrick Coulon’s striking black and white photo, Baton Rouge Police Attack Alton Sterling Demo, centers a swarm of heavily geared law enforcement officers. The photo captures policemen relentlessly pushing a protestor onto the ground; another civilian has already fallen over and lays by their feet. Surrounding the central cluster of officers is a circle of spectators, protestors, and dispersed among them, more law enforcement. While some civilians continue to hold up cardboard signs and whip out their camera phones, others put their hands up in pre-meditated defense. The scene takes place on July 10, 2016 at the site of a protest in Baton Rouge, Louisiana following the murder of Alton Sterling, a 37-year-old Black man who was shot and killed by two white police officers outside of a convenience store in Baton Rouge.

Baton Rouge Police attack Alton Sterling demo, spans across two full-length pages and sits within a larger collection of photos in Revel & Revolt, Coulon’s debut photography book released on April 12th this year that showcases an impressive portfolio of the artist’s documentation of protests, parades, and the punk scene in New Orleans between 2013 and 2020. New Orleans-based photographer Beau Patrick Coulon is no stranger to documenting the chaos of disrupting an unjust social order. Whether it’s taking pictures of the Black Lives Matter movement, the Women’s March, or Mardi Gras, Coulon aims to use his own nomadic experiences to inform his photographic eye, directing his efforts towards showing solidarity towards marginalized peoples and mutual aid. “I show up not with the intention to document something, but rather to give assistance and support,” Coulon tells Observer. “I don’t want to center myself in a community I’m not a part of but want to try to boost the signals of others through my photography.”

Being intentional and attentive to different communities, whether it’s living on their outskirts or being part of them, is integral to Coulon’s relationship with photography. Growing up, Coulon never stayed in one place for more than a couple months at a time. After moving out of his home when he was just thirteen, Coulon lived wherever he could — squats, camps, shelters, or with friends and family members if he was lucky. Throughout his teenage years and in his twenties, Coulon wore many hats — working as a farmhand in Washington, framing art in Tampa Bay, and even pouring concrete in Montana. Carrying only the bare necessities, including his 35mm camera, documentation of his journey became almost instinctual. “Taking pictures was just a great way of journaling and sort of collecting mementos, for lack of a better word,” Coulon says. “I would carry around stacks of pictures in my backpack of people I had met on the street or places I had seen.”

When Coulon met other travelers, they would exchange photos or show each other journals with pictures taped inside them. But in 2002, when Coulon was in his mid-twenties and living out of a car, his belongings got impounded, and with it, he lost all his photos — portfolios in shoeboxes full of negatives, developed prints, and even his ID. He stopped taking photos for more than five years, and it wasn’t until he was given a digital camera in 2007, that he started delving back into the medium and rediscovered his love for 35mm film. Despite the fact that by this point, Coulon was already in his 30s, his photography and subjects continued to be rooted in experiences dating all the way back to when he was young — before he lost the little that he had.

Even Coulon’s fascination with the punk rock scene began when he was just a teenager — a time he describes as “full of angst.” While other thirteen-year-olds began to play sports or started focusing more on their studies, Coulon found himself hanging out with the “dirt heads”and was frequently kicked out of school. Punk rock was his only escape — not only in the musical sense, but also in a communal way. “I would have to cross Hollywood Boulevard to get to school, and I would always run into these kids with spikes and dyed hair and mohawks and big tall boots,” Coulon says. “They accepted and welcomed me, and I felt like I was at home with a community for the first time in years.” Photos like Leftover Crack at the Red House and Urin at Cats Claw depict punk shows at local hangout spots in New Orleans and reveal Coulon’s personal ties to the scene, as he captures a freeform and heated energy internalized by those who are more than just mere observers. “I think people should shoot what they know,” Coulon says. “If I’m going to document something, I want to have a connection to it that transcends the surface.”

Despite his history of relocation and travel, New Orleans is a place that Coulon always found his way back to — coming to the city for the first time in 1995 and alternating between staying and moving away before finally deciding to settle in 2014. So it’s no surprise that New Orleans is where Coulon designed and assembled Revel & Revolt, as even during a year of isolation, his debut book achieves what the photographer does best — forming and documenting communities. In the book’s Afterword he writes, “In a lot of ways, this book itself is my response to the coronavirus pandemic […] I couldn’t invite anyone to a party, to see a band, or check out an art exhibit, but I still wanted to try bringing people together. To show how interconnected we still are.” And Revel & Revolt, with Coulon’s attentive close-up shots of individual members of the New Orleans community, as well as moments of necessary solidarity, reminds us of both of the joyous and hard-fought times of the past, as well as the work that still remains to be done for a just world in the future. 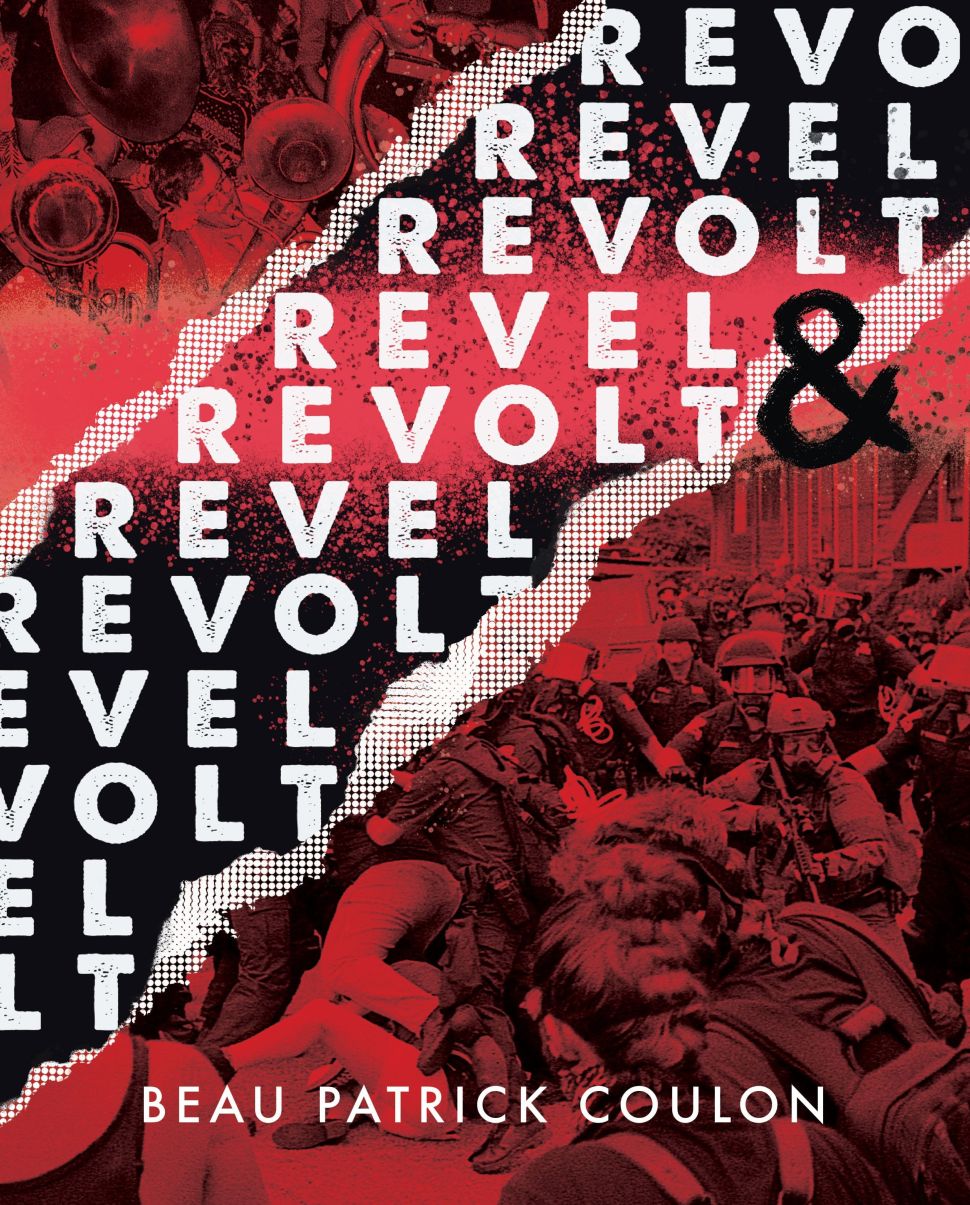