Last March, after the U.K. went into lockdown, Ben Wheatley didn’t waste any time. The writer and director started penning the screenplay for his new film In the Earth two weeks into the lockdown, placing a gritty folk horror story in the real-world setting of a global pandemic.

“One of the things that I thought was interesting about the moment we’re in was that we’d had a lot of run-ups to it or practices for it, but we finally found ourselves in the plot of a horror movie,” Wheatley tells Observer. “Reality was the horror at that point. How could I explore this but slightly sidestep the genre itself? I’d been working on a zombie thing and I suddenly felt like the lead-up to the pandemic was basically the building blocks of what a zombie movie would be like. It was interesting how close it was to films we would watch for pleasure, but also how different it was from the way we’d predicted it was going to happen.”

Instead of going with zombies or something more fantastical, Wheatley focused on a more grounded story that follows a scientist (Joel Fry) and a park scout (Ellora Torchia) as they venture into the English forest, encountering both human threats and a more otherworldly one along the way. The pandemic is there, but it exists as a backdrop to Wheatley’s exploration of the human relationship with nature and the world around us, here magnified as an ominous presence.

I’d been working on a zombie thing and I suddenly felt like the lead-up to the pandemic was basically the building blocks of what a zombie movie would be like.

In the Earth was one of the first productions to start up in the U.K. as COVID measures were put into place last summer, which brought a series of technical challenges along with it. The majority of the film was shot outdoors, on private woodlands in Henley-on-Thames, and Wheatley had to ensure that his small crew didn’t get sick since they couldn’t afford to lose any days on set.

“Anyone who had started filming before the pandemic had pandemic insurance,” Wheatley says. “But of course afterwards you don’t because you’re in it. You can’t get insurance for it because it’s actually happening to you. So it was challenging. We were also a very small production. If you’re making a $190-million movie you can have a lot of COVID protocols and have multiple versions of the crew, which you can swap in and out, but we just had to be very, very careful.”

The team shot for two weeks in August and despite the extreme attention to safety, it was a relief to be to work. Much of the small cast, which also includes Hayley Squires and Reece Shearsmith, had worked with Wheatley before, ensuring an ease of communication once they were all out in the woods together.

“It was literally the first time I’d been out in four months when we did the first scouting of the forest,” Wheatley remembers. “I generally work with the same set of people on each movie and no one had seen each other. So to see all your friends and get out was a major moment. That side of it was all quite emotional, really. And to be doing some work rather than just be at home looking out the window was brilliant.”

In the Earth premiered at Sundance in January to a positive critical response, but Wheatley hopes people can see it as more than just another pandemic project. The director, who also edited the film, is aware that stories about the COVID-19 pandemic may feel gimmicky, or even be a turn-off to viewers who are still living through this time. But he never hesitated to contribute a viewpoint on what was happening as it was happening.

“I made a film two years before called Happy New Year, Colin Burstead and that was a film that was very contemporary,” Wheatley reflects. “As artists and as filmmakers it’s our duty to capture the moment and try to understand it. The moment has come a little more sharper into focus than it is normally — I think that’s maybe why there’s that slight reaction against it — but my raison d’etre for filmmaking was always to reflect back some of the politics and some of the situation we’re in but back into genre. I’ve done that in every film, really. There was a strange feeling at Sundance where there was a critical reaction of the lumped together ‘pandemic movies’ and I was thinking, ‘Why would anyone ever have a problem with people trying to tackle the moment?’”

Next up Wheatley will direct a sequel to 2018’s The Meg, which he took on after departing the Tomb Raider sequel he was originally booked to helm. The Jason Statham-starrer is currently in pre-production. It may seem slightly off-kilter for Wheatley, who also recently directed Netflix’s Rebecca adaptation, but the director is curious to see where he can take a movie about a prehistoric shark.

[I thought] I might never work again. There was a distinct feeling that it might be the end of cinema. But as it went on we started to feel more confident and you started to see the end of what was happening.

“I really loved the original one,” Wheatley says. “It’s a weird film where with everybody I talked to no one had a bad word to say about The Meg. Their eyes would light up whenever you mentioned it. I thought, ‘Yeah, I know what this is.’ It’s highly entertaining and I felt like it was harkening back to an early time in Hollywood in some ways. That’s why I started getting interested in it.”

It’s been over a year since the pandemic shut down the entertainment industry, and Wheatley is grateful that In the Earth will actually be out in theaters, both in the U.S. and in the U.K. The film’s visuals and sound are immersive — uncomfortably so — and it’s important to him that audiences get to fully experience what cinema can achieve.

“That first week I thought that might be it,” Wheatley remembers. “[I thought] I might never work again. There was a distinct feeling that it might be the end of cinema. But as it went on we started to feel more confident and you started to see the end of what was happening. There’s many contradictions in In the Earth. One of them was that we played at Sundance, which was a virtual festival, and I was a little bit sad that it never got seen in the cinema at the time. No critic has seen it in the cinema. Which is sad because the film itself is designed for the cinema. But at the same time we never would have made the film if it hadn’t been for COVID and COVID caused the virtual festivals. That is the catch-22. But the fact that it is being released in the cinema is amazing. The brave souls who go will be rewarded. I literally haven’t seen it with an audience, so I’m looking forward to seeing it. There’s something electric about seeing a film for the first time with an audience.”

He adds, “It’s a film that’s made to be seen large. It’s made to be so big that it goes over the edges of your peripheral vision and the sound is so loud that it knocks you back in your seat and you can’t turn it down and you can’t get up five times to go and have a pee.”

In the Earth hits theaters April 16. 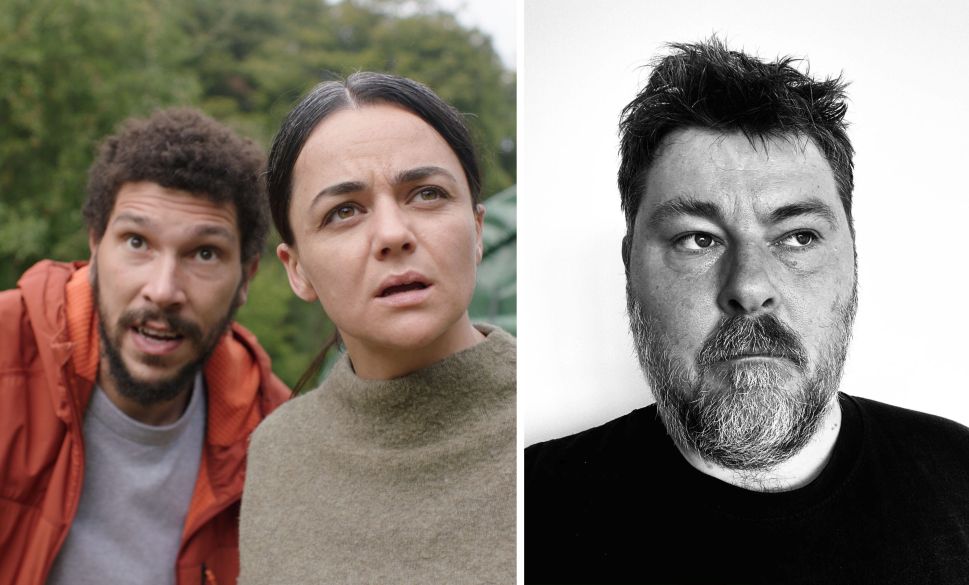