For International Workers’ Day on the 1st of May, we remember films that do what is rare in cinema: center the worker. Most mainstream films, especially in the age of the blockbuster, tend to follow the lives of middle- and upper-class people and are rarely told through the eyes of the farmworker, servant, factory worker, miner, cleaner or other members of the working class—even though these stories belong to the majority of the global population. These films defy this norm and introduce topics of class struggle and inequality through masterful storytelling and plot.

Labor struggles are a constant in the global capitalist system, with the pandemic exacerbating major worker issues. In the meatpacking industry, workers accused companies like Tyson Factory of unsafe working conditions, failing to provide protective equipment and forcing workers to carry on working while sick—causing massive coronavirus outbreaks across numerous factories. And as Amazon sales increased during the pandemic, obscene figures about the increase in Jeff Bezos’ wealth circulated. At the same time, Amazon workers continued to report about the abusive working conditions, all over the world, leading to the first global coalition of Amazon workers of coordinated strikes.

While many of these films are historical, they are easily applied to present day labor battlegrounds. Watching films is not only a medium for entertainment but can also be a tool for education and mobilization. These narrative films* capture class movements all around the world, inspired by true events and society. While some make clever commentary on the current capitalist system, issues of gender, race, immigration and colonialism are intertwined as they are in real life.

The Killing Floor, directed by Bill Duke, follows the life of Frank Custer (played by Damien Leake), a Black Southerner, who travels to Chicago during World War 1. He takes up work in a meatpacking slaughterhouse and becomes entangled in tensions between the racist white workers wanting to unionize and Black workers refusal to join the racist workers’ organizing efforts. The film covers the complexities of worker exploitation amidst the politics of race antagonism. Buy The Killing Floor on Blu-Ray.

This American classic stars Sally Field, playing the role of Norma Rae Webster, based on the life of Crystal Lee Suton, a union organizer who was fired from textile company J.P. Stevens, for copying an anti-union letter from the bulletin board in the office. After poor working conditions start affecting the health of the factory workers, Norma Rae becomes involved in union activities, culminating in a scene where the factory comes to a standstill as workers down their tools. Buy Norma Rae on Blu-Ray.

Ken Loach’s film is about the struggle of janitorial workers and their fight for the right to unionize. Bread and Roses centers on the lives of two immigrant sisters from Mexico, working as janitors in downtown L.A. Their company is anti-union and the hot tempered supervisor hires and fires workers on impulse. Maya, one of the sisters, ends up joining the growing “Justice for Janitors” campaign, causing management to impart divide and conquer tactics. Rent Bread and Roses on Vimeo.

Bong Joon Ho’s Oscar winning Parasite is a South Korean film about a poor family that scams a rich family into hiring the whole family in various domestic jobs. Through deceit and struggle, class warfare plays out in this film as the survival of the workers is dependent on their ignorant and wealthy bosses. A complex and unexpected twist makes commentary on the violence of poverty and the dog-eat-dog nature of capitalism through comedic horror. Watch Parasite on Hulu.

Based in Dakar, Senegal, this mesmerizing film directed by Mati Diop, weaves between themes of the supernatural, class, love and migration. It follows Ada, a girl in love with Suleiman, one of the construction workers building a futuristic tower on the coast of the Atlantic Ocean. Having not been paid for months, the workers leave on a boat to cross the ocean in search of better work opportunities. As the film unfolds, it becomes clear that they didn’t survive, their spirits coming back to haunt, among others, the tycoon who forced them out to sea. Watch Atlantics on Netflix.

Boots Riley’s directorial debut is a satirical comedy on the state of corporate pursuits and the broken nature of capitalism. Starring LaKeith Stanfield, a young Black man adopts a white accent in his telemarketing job, increasing his success in sales. He becomes singled out and promoted, caught between monetary incentives and being required to repress the organizing efforts of the bottom tier workers (his former peers). Watch Sorry to Bother You on Hulu.

Set in the early 1930s, The Land or Al Ard, directed by legendary Egyptian director Youssef Chahine (based on a popular novel by Abdel Rahman al-Sharqawi), is about the misfortune in the lives of poor cotton farmers living in the Nile Delta. Issues of land ownership become the major battleground as farmers are exploited by a corrupt landlord. In the fight for self-determination, they discover the power of collective organization. Watch The Land on Netflix.

In Alan Yang’s directorial debut, when a Taiwanese factory worker’s mother (who works at the same factory) is injured due to the dangerous working conditions, he is forced to move to the US, choosing to marry a rich man’s daughter and leaving behind the love of his life. He works as a shopkeeper, but life as a poor immigrant in the US is not what he expected. The film captures the generational effect of poverty, broken dreams and grief. Watch Tigertail on Netflix.

I compagni, an Italian film directed by Mario Monicelli, tells the story of a teacher- turned- organizer of the exploited factory workers of Turin’s textile industry. Set in the late 1900s, catastrophe hits a worker who is injured by a machine when he becomes drowsy after long working hours. The workers organize and demand for one less hour of work each day, to prevent exhaustion. As their grievances go ignored, they stage a walk-out. Tensions continue as the fight between management and workers continues leading to a series of suspenseful events. Buy The Organizer on Blu-Ray.

Alfonso Cuarón directs this Oscar winning Mexican film about the life of an indigenous live-in housekeeper. Cleo, played by Yalitza Aparicio, takes care of the children and house cleaning for a wealthy family. When Cleo falls pregnant, her boyfriend abandons her. But when her employer takes her out shopping for the baby one day, they are caught in the clashes between student protests involving her ex-boyfriend, and a paramilitary group. The film is a slow and captivating reflection of traumas, race and class in Mexico City. Watch Roma on Netflix.

This biopic is about Ernesto (Che) Guevara and his friend Alberto Granada’s expedition around South America on a motorcycle. Inspired by memoirs about Guevara and Granada, it documents their journey, traveling through tough terrain, weather conditions with very little money. Although the purpose of the trip was to experience life in the final years of their youth, the injustice against the poor and indigenous people that they witness along the way, becomes the transformative moments in Guevara’s journey to becoming a socialist revolutionary. Watch The Motorcycle Diaries for free on Peacock.

Directed by John Sayles, Matewan is based on true events, about the harrowing lives of coal miners in Matewan, Mingo County. As a labor union organizer comes to town, a new, different kind of evangelism begins to spread in this Baptist community, building up to the climax of the historical Battle of Matewan of 1920, a shootout between miners and the Baldwin–Felts Detective Agency; the mine owners’ hired agents of violent worker repression. Buy Matewan on Blu-Ray.

Sally Hawkins is the leading role in this British film about the strike of 1968 by women sewing machinists at the Ford Dagenham Plant, garnering global attention. The women striking for equal pay and sex equality resulted in the landmark Equal Pay Act of 1970. The film captures the idea of gender roles at the time and how the company underestimated their women workers’ capacity to organize. Rent Made in Dagenham on Vudu.

Bong Joon Ho’s imagination of the world in 2031, when a climate-change experiment goes disastrously is a dystopian masterpiece of class divides and revolution. All life on earth ceases to exist in the new “ice age” except for the last remaining humans on board of a revolving train called Snowpiercer—segregated by class, with the lowest class relegated to squalor in the train’s tail. The film follows their plot to organize a revolution and fight the security apparatus protecting the elites. Watch Snowpiercer on Netflix.

* Eds. note: We skipped documentaries to keep this list focused, but here are a few we think you should watch: Harlan County, USA, American Factory and Workingman’s Death. 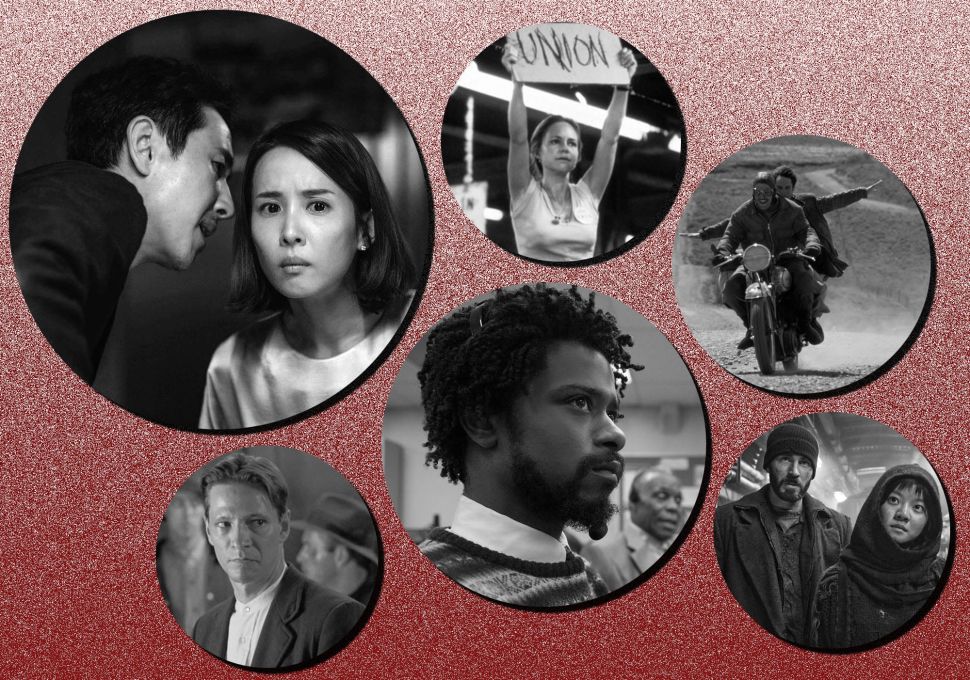 Filed Under: Movies, Entertainment, Sorry to Bother You, Parasite