Slowly but surely, the United States of America has been growing out of its antiquated demonization of cannabis. On Wednesday, New York became the 16th state outside of Washington D.C. to legalize its recreational use for adults over the age of 21. Where as once this may have been unfairly viewed as a win for lazy stoners and hippie potheads, it is now seen as a logical progression of our narcotics classifications and an economic boon for regional markets.

That’s not to say that those who already partake regularly won’t benefit as well. If you love to get high and watch movies, then this new cannabis legislation is a feel-good middle finger to your nosy neighbor who’s always threatening to call the cops. We get it, Karen, you didn’t have friends in high school.

But as experienced smokers know all too well, different types of weed provide you with different types of highs. A sativa strain is known to be deliver an uplifting and cerebral high that comes with a boost of creative energy and mental acuity. An indica strain delivers more of a relaxing body high as an appetite stimulator and sleep aid. The latter is more chill, the former more engaged. So to help you celebrate the dawn of a new New York era, here are the 10 movies to enjoy, whether you’re a fan of indica or sativa.

Verdict? Sativa. Based on the celebrated 1982 manga, Akira is arguably the pinnacle of the animated adaptation and a prime example of how to properly translate complicated source material to the screen. The film, set in a dystopian future of 2019, revolves around a secret military project that endangers Neo-Tokyo when it gives a biker gang member incredible telekinetic abilities. The fully realized details of this post-apocalyptic cyberpunk world, sewn into each and every frame with great care, are almost imperceptible upon first watch. But the subtle nuances are better appreciated when high on sativa and locked into every scene.

It’s not just that Akira is beaming with visual animated splendor. It’s also that the film tackles nuclear fear and the power of military industrial complexes in a thought-provoking way. Watch it on Tubi.

Indica. Friday is a key entry in the buddy stoner genre, arriving in 1995 and eventually spawning a four-film franchise that spanned 18 years. But none of the later entries could live up to the original’s vibrancy with Chris Tucker and Ice Cube, which examined the intersection of urban and pop culture in LOL-inducing fashion.

Friday is crass, energetic, quirky, and honest and for what it may lack in plot, it more than makes up for in crude calorie humor. Imagine House Party with more of an edge. For an indica high where you’re hoping to be entertained with comedic lobs, Friday is a great celebratory selection. Watch it on Amazon.

Sativa. Stanley Kubrick’s medium-shifting 1968 film is partly responsible for science fiction’s emergence in Hollywood. Though they are vastly different features with little in common, we likely don’t get George Lucas’ Star Wars in 1977 without Kubrick remodeling our idea of what’s capable on the big screen first. The special effects of today are rooted in Kubrick’s before-his-time ascent.

Arguably the most cerebral mindfuck of a film made in the 20th century, 2001: A Space Odyssey is the cinematic equivalent of food for thought. Wrestling with mankind’s true nature, the development of our species, and the existence of superior lifeforms, the film provides ample discussion fodder, particularly for those enjoying a keyed in high. Watch it on HBO Max.

Indica. In Chef, Jon Favreau’s Carl Casper quits his position at a prestigious Los Angeles restaurant before opening a food truck with his best friend and son. He’s also navigating a love life that includes a love triangle between characters played by Scarlett Johansson and Sofia Vergara. Did we mention that Favreau directed the movie too? You can’t fool us, buddy.

Chef may be predictable, but it’s a tummy-rumbling delicacy for hungry viewers looking to fill up on a pleasant and delectable midnight snack. It’s sweet and savory and pairs nicely with your go-to order of delicious comfort food. Watch it on Netflix.

Bad Times at the El Royale

Sativa. Man, is this one helluva fun movie. The 2018 mystery thriller was director Drew Goddard‘s second feature film behind the camera and, unfortunately, it absolutely bombed at the box office. But even as a scattershot financial flop, Bad Times at the El Royale is one of the more underrated originals of the last half decade.

Featuring an all-star cast that includes Jeff Bridges, Chris Hemsworth, Jon Hamm, Dakota Johnson and Cynthia Erivo, the film follows seven strangers, each carrying their own secret, as they cross paths at a rundown hotel with a dark past. It’s Tarantino Lite, blending familiar genres and motifs over two hours of fanciful, stylish, well-executed fun. Watch it on Hulu.

Indica. There’s a case to made that The Big Lebowski is the single-greatest film in the sterling track record of the Coen Brothers, who have won four Oscars for completely different movies. Crackling with sharp dialogue, the well-written feature is likely the duo’s funniest film, which is also partly due to stellar performances from Jeff Bridges and John Goodman.

Eminently quotable and endlessly rewatchable, The Big Lebowski somehow manages to deftly blend character-specific humor, dramatic mystery, and a lovable parody of film noir all in one. It’s a skillful masterpiece made by and for true film lovers. Watch it on Peacock.

Sativa. Rian Johnson needs to cut me in on some royalties because there isn’t a mainstream media member who has beaten the drum as loudly or as frequently for Brick than me. Johnson’s first feature directorial effort is a modernized film noir that follows teenaged loner Brendan (Joseph Gordon-Levitt) as he plunges into the underworld of a high school crime ring to investigate the disappearance of his ex-girlfriend.

Stylish and substantive, Brick is a grittier, pared-down Agatha Christie novel for the new age. It’s a film that shows off distinct visual and narrative flourishes from a filmmaker who would go on to make Looper and Knives Out. More than anything, it’s a compelling and absorbing detective story entwined with a whodunnit. Watch it on Amazon.

Indica. A body high is great because it can unlock deep wells of adaptive feeling. That’s what makes it the perfect accompaniment for The Princess Bride.

The film is a fairy tale that transports you to a cheeky translation of every swashbuckling and mythic legend that we grow up on. It’s a world of known wonder and self-aware inspiration brought to life by colorful characters that are rendered immortal by the time the film concludes. Quite simply, The Princess Bride is a perfect movie made better by a special kind of high. Watch it on Disney+.

Sativa. Who Framed Roger Rabbit takes place in a world where cartoons live alongside flesh-and-blood humans in 1947 Hollywood. On paper, the absolutely out-there, gonzo concept should have never worked. Yet thanks to excellent direction from Robert Zemeckis, an all-in performance from Bob Hoskins, and stellar voice work all around, Who Framed Roger Rabbit is one of the zaniest, most creative cinematic achievements of the last 50 years.

What’s more, animation director Richard Williams helped to solve a critical new problem facing the medium: the importance of the eye line between cartoon and live actors to establish the believability of a scene. Without his keen observations and adjustments, the film loses its audience in the uncanny valley (and ’90s kids are deprived of Space Jam). Watch it on Disney+. 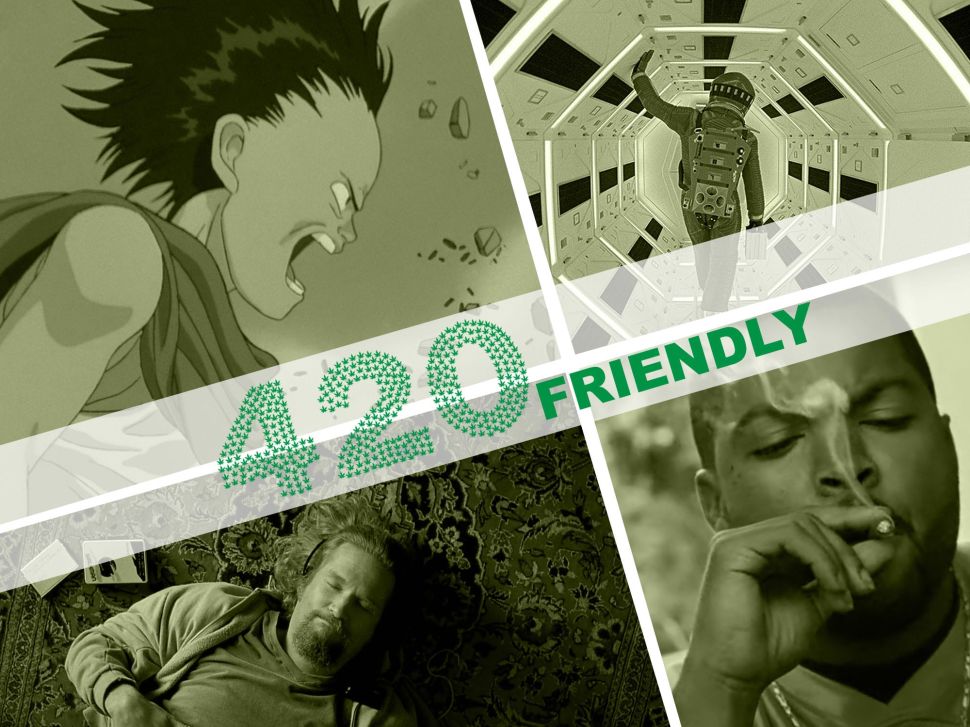