About 30 years ago — that’s a month in pandemic years — I was in a college acting class. Our teacher, a flamboyant, potbellied imp who fled the Iranian revolution and landed on our shores, demanded of his scruffy students: “What would you sacrifice for theater?” We stared, stumped, probably hungover. “Would you hack off your own arm?!” he asked, chopping the air with his hand. “Would you walk through fire? Would you… die?” He grinned with mock cruelty, goading us to declare fanatically that yes — yes, sir! — we would die for theater.

So here I am masked at the Daryl Roth Theatre waiting for Blindness to begin. I’ve had one Pfizer jab; I don’t know the vaxx status of the dozens of strangers around me. We’re all sitting on hard-backed, schoolroom chairs waiting for the…show?…to begin. The vast, black vault (an ex-bank, home since 1998 to De La Guarda spectacles) is void except for us and perpendicular neon tubes suspended above. My thrill at being able to review theater in person is shading into fear that it will make a line in my obituary: “He died a freelancer, covering a fairly engaging A/V installation based on a book he always meant to read.”

First a 1995 bestseller by Portuguese author José Saramago, then a 2008 movie starring Julianne Moore and Mark Ruffalo, the latest incarnation is adapted by Simon Stephens (Sea Wall) and directed by Walter Meierjohann. It ran at London’s Donmar Warehouse last summer, a mid-pandemic experiment that proved successful. Blindness bills itself, accurately, as a “socially distanced sound and light experience.” You sit, put on headphones, the lights dim, neon tubes lower and rise and change color, while the marvelous Juliet Stevenson purrs and croaks and shouts in your ears about the end of the world. Given that the event is automated except for ushers and operators, you’re effectively both spectator and live performer.

Faithful to Saramago’s story but radically condensed (the audiobook is 12 hours, the show 70 minutes), Blindness is the allegorical tale of a nameless city in a nameless country, where the unnamed characters (“The first blind man,” “The girl with the dark glasses” etc.) lose their sight in an inexplicable pandemic. Rather than everything going black, we are told, the victims behold a morbid eternity of white. The plot focuses on the harrowing journey of “the doctor” and his wife — the latter keeps her vision but pretends to be blind to help her spouse — through a hellish, deteriorating quarantine in an abandoned asylum and survival afterward on the streets. Other characters gravitate toward the husband and wife, forming a protective, compassionate family as the sighted woman leads the others to possible safety.

For audiophiles or fans of radio drama, the aural effects of the show are delicious. Sound designers (and brothers) Ben and Max Ringham orchestrate scads of gooseflesh-raising binaural effects — also known as “3D sound,” because it feels like Stevenson is moving around you, now whispering in your ear, now shouting from 20 feet away, slamming a plastic chair down for emphasis. Enhanced by long periods set in total darkness, the sensual experience is more intense than any movie or play could achieve. And the seasoned (pre-recorded) Stevenson, an old hand at audiobooks as well as a smashing actress, brings dazzling colors to your mind: growing horror at the squalor of the overcrowded, lawless quarantine, orgiastic glee at discovering a stockroom of food.

Jessica Hung Han Yun’s stealthy and surprising light design is integral to the building narrative, and Stephens’s lean, speedy adaptation distils the novel to its most iconic and potent details, accentuating Saramago’s graceful if didactic three-act moral. (Stephens blessedly opts not to dramatize a mass rape in the asylum.) As for the relevance of a story about the state’s catastrophic incompetence and failure to protect its citizens, and the tendency of said citizens to turn on each other with tribalist zeal, let’s just say the hopeful ending goes down better in April 2021 than it might have four months ago. Director Meierjohann engineers a reveal at the end (no spoiler) that may be hokey, but still touches you.

Like me, you may leave thinking: We’ve been through hell, but better days are ahead—if we only pull together and practice kindness. Purely from a theater perspective, the optimism is warranted. Blindness (an open-ended run) isn’t a freak stunt; Monologist Mike Daisey is holding court for 22 vaccinated souls at the Kraine, and last week at Broadway’s St. James Theatre, Savion Glover and Nathan Lane dropped by for pop-up neo-vaudeville. By the time you read this, there may be more toes in the . Theater is healing. Far from killing you, it gives you more life. 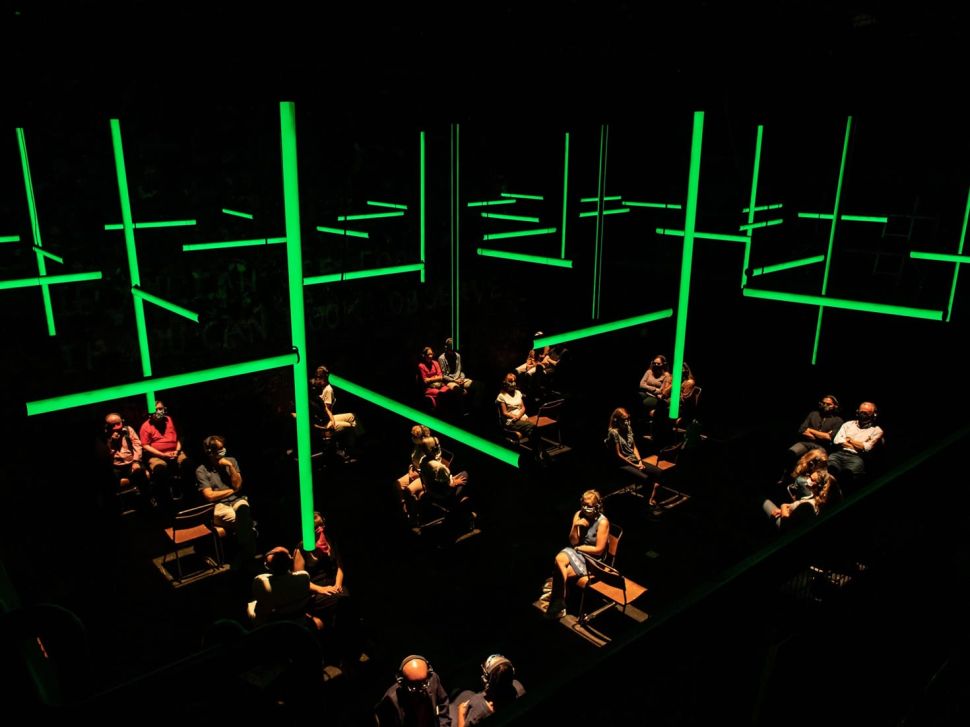